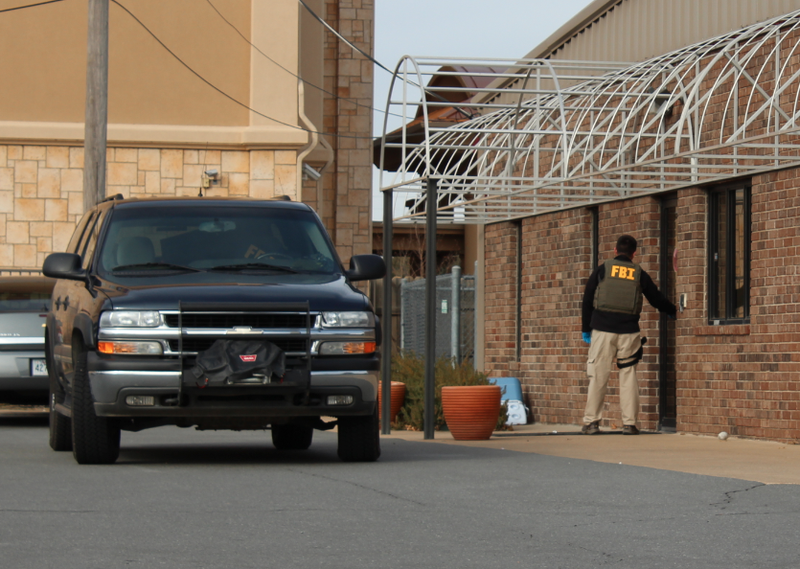 An FBI official walks into one of the Rogers Photo Archive buildings in North Little Rock Tuesday.

Officials with the Federal Bureau of Investigation are on the scene Tuesday morning at the Rogers Photo Archive in North Little Rock.

Brunell said she could not comment on what was being investigated or whether any arrests had been made or were forthcoming.

"I can confirm that we have FBI agents present at two locations," she said. "They are present there conducting official business or operation."

Agents wearing FBI jackets were seen leaving and entering one building at the Poplar Street complex midmorning. A woman who identified herself as an FBI employee exited a separate building and asked a reporter to leave.

Blake Hendrix, an attorney representing Rogers, said the FBI was serving search warrants at Rogers' business and home, but it's unclear what they were looking for.

"We don't know what the lay of the land is at this point," Hendrix said.

He said Rogers has not been arrested or advised he would be charged with any crime.

Hendrix said agents are "gathering information based on suspicion" but it's unclear what that suspicion is or when more information will be divulged.

A spokesman for the U.S. Attorney for the Eastern District of Arkansas said she did not have any information but would check into it.

Several vehicles were seen outside of Rogers' home, which sits along Lake No. 1 in North Little Rock's Lakewood neighborhood. It wasn't clear whether they were law enforcement vehicles.

A woman who pulled up to the house Tuesday morning identified herself as an archive employee and said authorities had asked employees to leave the business. She said she didn't know what was going on.