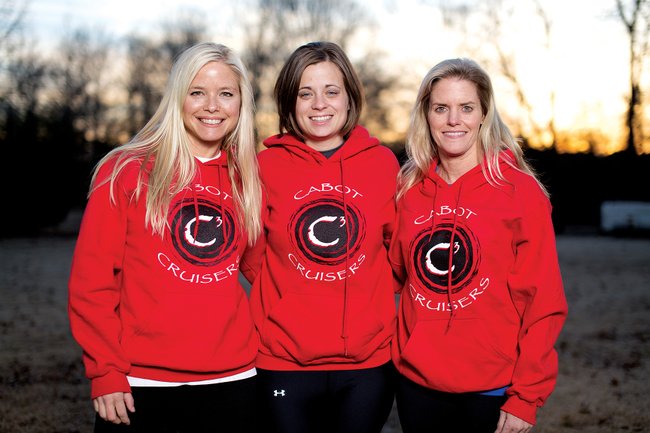 From the left, Heather Sanders, Shelly Clopper and Brenda Ransom are part of the Cabot Cruisers, a running club that is organizing the Sharae Bryant Memorial 5K Run/Walk to raise money for Bryant’s four children. Bryant was killed Dec. 19 at her home in Austin.

When Sharae Bryant was killed on Dec. 19, her friends immediately started thinking about what they could do to remember Bryant and help her family.

Bryant’s husband, former Lonoke County reserve deputy Charlie Bryant, is facing a capital-murder charge in the Dec. 19 shooting death of his wife at their home in Austin, according to an article in the Arkansas Democrat-Gazette.

Charlie Bryant’s original arraignment date was Jan. 21 but has been rescheduled to Feb. 18, said Chuck Graham, Lonoke County prosecuting attorney. Bryant is being held without bond in the Faulkner County Detention Center. If he is charged with capital murder, he will face life in prison without parole or the death penalty, Graham said.

The group of Sharae Bryant’s friends said they thought a 5K would be the best way to honor her because she enjoyed the sport.

“[Running] is what Sharae loved to do,” Sanders said.

Sanders, Ransom, Clopper and Blanton all ran with Bryant in a community running group, the Cabot Cruisers.

When talk of having a memorial for Bryant began, Ransom said, there was a plan for a small group to do a walk in a neighborhood to remember Bryant, but the event evolved into a community 5K.

At 10 a.m. March 15 at Faith Baptist Church in Cabot, residents of the Cabot community and surrounding area will walk or run a 5K to remember Bryant and donate money to her family.

Sharae Bryant’s Memorial 5K Run/Walk has drawn attention not only in the Cabot area, but from people across the nation who have expressed interest in participating in the event.

“There have been people asking me about it from Florida and even Germany,” Clopper said.

More than 400 people have confirmed their attendance at the event via Facebook, Sanders said.

This 5K is a noncertified, nontimed run/walk, and there is no registration fee. All donations collected at the event will be put into a trust fund for the Bryant children.

The amount of support from the Cabot community has been exciting for Bryant’s family, the group of women said.

“[Sharae’s mother] said her heart is so full. The family is very excited about this,” Sanders said. “We want to be there for the kids. We’re a small community, and their kids were so involved with activities all around the community.”

Planning this event has given the women a way to bond as a group.

“I think it’s brought us four together,” Sanders said.

Clopper said the community has come together to help make the race a success.

“I’ve had random strangers messaging me asking what they can do to help,” Clopper said.

Donation after donation has flooded in for the memorial, the women said.

“I contacted [Faith Baptist Church] and asked them if we could use their parking lot [to start the race],” Ransom said. “The pastor said, ‘You can use our bathrooms, tables, everything.’ We haven’t had to ask for anything — everyone is just offering.”

Clopper said a sound system has been donated for use at the event, along with 500 bottles of water and food for participants.

“It is the whole community coming together for this,” Sanders said.

Anyone who cannot make it to Cabot on the day of the event will have an opportunity to participate in the 5K virtually. Participants can print out bibs for the race from www.races2remember.com and wear them as they walk or run in their areas. The 5K organizers said virtual participants are asked to get someone to take photos of them walking or running and upload them to the Facebook event page.