Bank of Ozarks agrees to purchase Summit, 11th acquisition since ’10 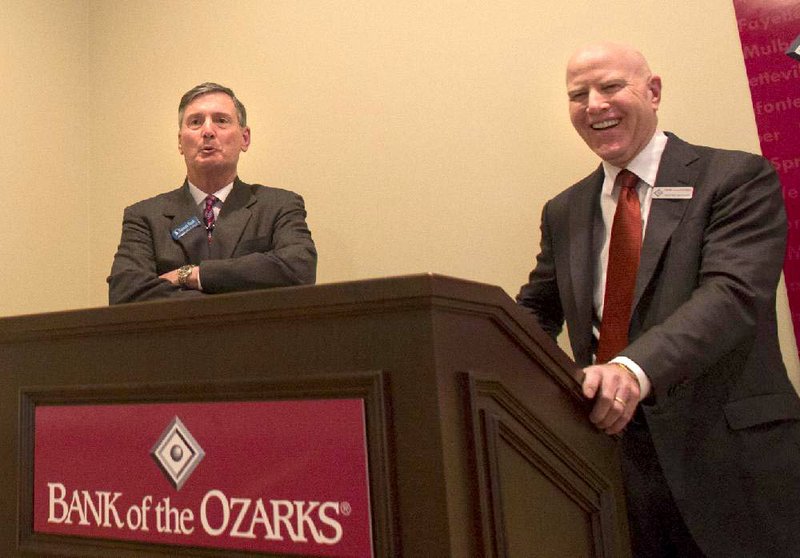 Bank of the Ozarks has agreed to buy Summit Bancorp of Arkadelphia for $216 million, the Little Rock firm said Thursday.

After the purchase, Bank of the Ozarks will remain the state’s third-largest bank, behind Arvest Bank of Fayetteville and Centennial Bank of Conway. It will have 90 offices in Arkansas.

It is the 11th acquisition for Bank of the Ozarks since 2010 and its largest.

“We could acquire [other banks],” Whipple said. “We could negotiate a sale or find a strategic partner.”

At least 80 percent of the sale price will be in Bank of the Ozarks stock, which has been one of the best-performing bank stocks in recent years.

That was illustrated Thursday. Bank of the Ozarks shares closed at $62.31, up $4.21 or 7.25 percent, in trading on the Nasdaq exchange. There were more than 700,000 shares traded, more than four times its average volume.

Bank of the Ozarks planned to announce the purchase after the stock markets closed at 3 p.m. Thursday, said Susan Blair, a Bank of the Ozarks spokesman. But news of the acquisition was reported in the media before the official announcement. That sparked “unusual activity in our stock trading volume,” Blair said.

“We immediately notified Nasdaq, as is the customary practice, and jointly decided to halt trading until the announcement of the acquisition could be made,” Blair said. “The announcement was made public at approximately 1:20 p.m., and trading resumed 30 minutes later.”

Whipple, who will join the Bank of the Ozarks board, said he met with George Gleason, chairman and chief executive officer of Bank of the Ozarks, in late November or early December about the possibility of selling Summit Bank. They quickly reached common ground, Gleason said.

Bank of the Ozarks expects the acquisition to add 25 to 30 cents per share in profit in the first 12 months after the deal closes in late spring.

“Bank of the Ozarks has the opportunity to expand by using their stock,” Dennis said. “It is a well-run bank.”

Summit is a profitable bank with no asset problems, Dennis said.

“I think it’s a good match for Bank of the Ozarks,” Dennis said.

“We very carefully try to screen and prioritize the candidates,” Gleason said.

It will retain the “vast majority” of Summit employees who will continue working for Bank of the Ozarks, Gleason said. Summit has about 290 employees.

Fourteen of Summit Bank’s offices are within 2 miles of a Bank of the Ozarks office, but not all of those will necessarily close, Gleason said.

“There will be some branch closing in markets where we have obvious overlapping and excess capacity exists,” Gleason said. No decision about branch closings will be made until further evaluation, he said. “But not all overlapping branches will be eliminated. In some cases, there are branches where the volume of business in the Ozarks office combined with the volume of business in the Summit office nearby cannot be served with a single office.”

Whipple did not include a Magnolia bank in that 1998 sale, and from that bank Whipple soon began to build Summit Bancorp.

The sale of Horizon Bank was for 3.2 times book value, one of the higher sales values of banks in the late 1990s. The sale to Bank of the Ozarks is about half that value, but Whipple is excited about the Bank of the Ozarks stock.

“We’re not cashing out,” said Whipple, who said he sold his Mercantile stock soon after selling Horizon but won’t do that with his Bank of the Ozarks stock. “We’re getting a high-performing stock.”

There have been a number of in-state bank acquisitions in recent months.

In June, Home BancShares of Conway, owner of Centennial Bank, announced that it would buy Liberty Bancshares of Jonesboro for $280 million in stock and cash. The deal was the largest transaction between Arkansas banks in the state’s history.

First Federal Bancshares of Harrison said in July that it would pay $124 million to buy First National Security Co., which owned banks in Hot Springs and Jonesboro.

And in October, Arvest Bank said it would buy National Banking Corp. of North Little Rock.