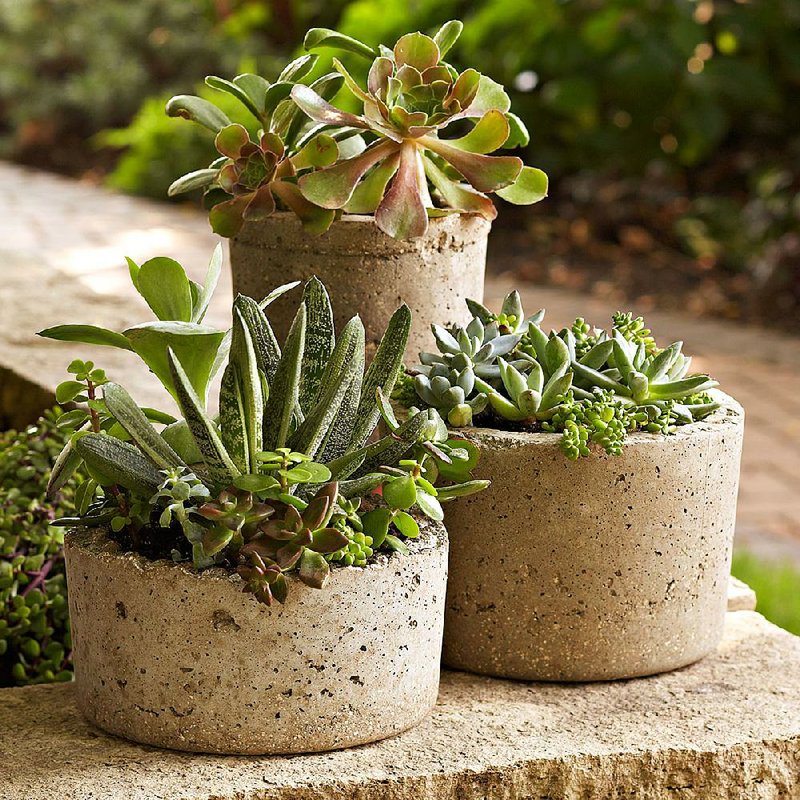 Many adults have fond memories of getting down and dirty as children, entertaining themselves for hours "cooking" mud pies. The recipe was simple: water and dirt. After mixing, the "dough" was patted into plastic margarine dishes, old plates, jar lids, actual pie pans or anything else handy. Part of the fun was decorating the creations with leaves, berries, pebbles, sticks, flower petals -- whatever happened to be available.

Alas, the mud pies quickly dried and crumbled. The mud-pie years were just as fleeting. But there's a way to re-create that messy fun on an adult level: hypertufa. With hypertufa -- a mixture of Portland cement, peat moss, perlite, sand and water -- it's possible to play in the mud, but end up with durable, long-lasting containers and decorative items for the yard or garden.

North Little Rock artist Kandy Jones has been messing around in such "mud" for the past 12 years, mixing and patting hypertufa into molds to create pots for plants, garden art, stepping stones and birdbaths. The backyard of Jones' house in the Argenta area of North Little Rock doubles as an outdoor hypertufa studio, plus she has a cottage where she creates mosaic art.

Pointing to a large dogwood tree in one corner, Jones says the 80-year-old tree inspired her interest in the lightweight, stone-like material. She wanted to build a patio beneath it, but because its roots had emerged above ground they couldn't be covered without harming the tree. After a little online research, she says, she realized hypertufa could be the answer.

To create her hypertufa patio, Jones dug shallow impressions in the dirt between the tree's roots, then poured the hypertufa mixture directly into the impressions to create 82 stones. Since then they've darkened, settled and blend organically into the landscape. "That's the great thing about hypertufa -- it's just gets cooler with age," she says.

Jones explains that hypertufa is a manmade version of volcanic limestone that long-ago farmers in England carved into water troughs. Hypertufa's main ingredient is Portland cement, but it's lighter than stone or concrete. The addition of peat moss and perlite gives it a natural, stone-like appearance and makes it water permeable. Sand is the final ingredient, but essential because it binds with the cement to provide hypertufa with the strength and durability of rock.

Since building her patio, Jones has created hypertufa planters, sculpture, troughs, leaf castings and fountains. She enjoys sharing what she has learned and teaches her techniques in classes in her backyard as well as at the Arkansas Arts Center and Eureka Springs School of Art.

Jones mixes hypertufa at a table beneath a shade tree in her backyard. Playing in the mud is messy, so outdoors is the only place to work, she says. Next to the table is a stack of plastic bins containing the ingredients. She measures them in a plastic dish pan, where they'll be hand-mixed before water is added.

The beauty of hypertufa is that it's inexpensive as well as easy to make. A 92-pound bag of Portland cement (the smallest available size) costs less than $10. Peat moss ranges from $4-$11 and perlite costs $4-$5. Fifty pounds of sand runs about $4. All ingredients are available at home improvement stores.

Almost anything (other than metal and glass) can be used as a mold when working with hypertufa. Some of the items Jones uses are pizza boxes, plastic foam coolers, deli trays, plastic plant pots, plastic pumpkins, Halloween masks, buckets, baskets and old plastic mixing bowls.

Jones recommends learning how to work with hypertufa by starting with a simple project such as a decorative stone molded in a medium-size pizza box.

Assemble these tools and ingredients.

• An old colander to use as a sifter

• Water container, such as an old milk jug

This is Jones' basic hypertufa recipe. She says measurements are in "parts" rather than units such as quarts or cups because the amount and proportions of each ingredient depend on the project. For most items, she uses the proportions listed here, measuring with a plastic quart pitcher; one pitcher is one part.

Put on the mask, then measure all ingredients into a plastic tub and thoroughly mix together by hand. Always wear thick rubber gloves, Jones says. Because Portland cement is made of lime, it's caustic and can dry or irritate the skin.

After mixing, set aside a cup of the dry mixture to use if the mixture becomes too watery during the next step. Now, begin adding water to the dry mix, working it in by hand. Stop when the mixture is the consistency of thick oatmeal. Jones says the moisture level can be tested by squeezing a handful. The mix is correct if it holds its shape and drips slightly.

Jones says the biggest mistake is adding too much water. If this happens, correct the mixture by adding more Portland cement, perlite, peat moss and sand in the original proportions. Adding only one or two of the ingredients can weaken the hypertufa. So use the cupful set aside earlier.

Let the mix rest for 10 minutes. While it's resting, prepare the mold. If using a pizza box, reinforce the corners with duct tape. Line the mold with plastic and spray the plastic with the release agent. For molds that have a pattern to be picked up by the hypertufa -- a wicker basket, for example -- skip the plastic and just spray the inside of the mold with the release agent.

Scoop hypertufa into the mold, patting it into place. There's no need to be gentle when pressing it into shape because the point is to remove air bubbles that can weaken the finished product. If the mold is a pizza box, fill it to the rim with hypertufa. If molding hypertufa to the inside of a bowl or pot, make the walls 1 to 2 inches thick. The larger the project, Jones says, the thicker the walls need to be. For the birdbath project she demonstrated recently, the walls were about 2 inches thick.

While smoothing the hypertufa into the mold, it may dry out a bit. If so, moisten and revive the mixture by spritzing it with water from the spray bottle.

After filling the mold with hypertufa, wrap the project in a plastic bag and set it in a shady area to dry for at least two to three days. When it's removed from the mold, a wire brush can be used on the outside to create texture.

After releasing the creation from its mold, set it aside and allow it to "cure" for an additional 28 days. During this time, don't be surprised by its musty, earthy odor, Jones says.

At the end of the curing process, remove lime residue by rinsing it with a solution of 10 percent vinegar and 90 percent water. Then it's ready to be used. Hypertufa resists chips and cracking and should last for years.