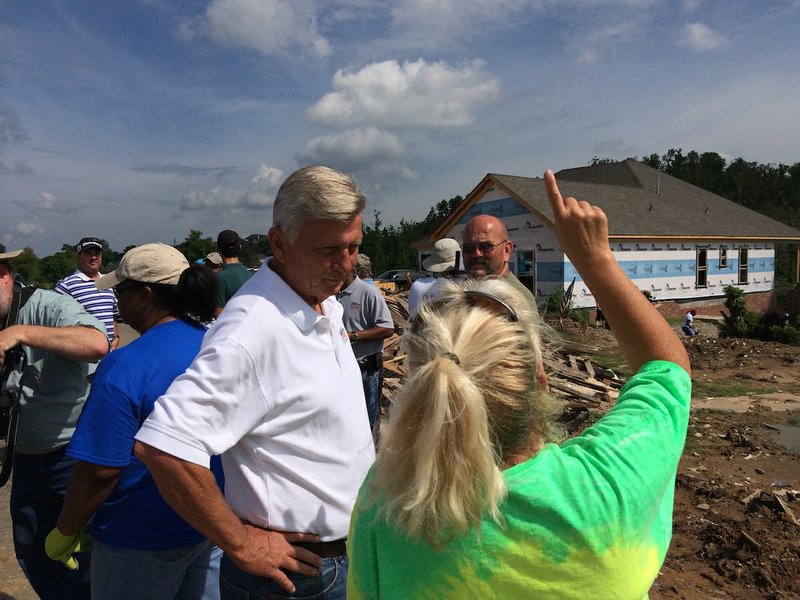 Gov. Mike Beebe and members of Beebe Cares, a volunteer committee made up of Capitol staff members and people from around the state, were in Mayflower on Thursday helping one of their own in need.

Donnie Belew, who has been a member of Beebe’s security detail for almost eight years, was a victim of the tornado that struck the city on April 27.

Belew, his wife and his youngest son were in their River Bend Road home when the storm hit.

“They had forecasted this storm system for days in advance, so we knew it was coming. We just didn’t know when,” Belew said.

He was preparing for a midnight shift at work the night the storm system hit Mayflower. He said he was watching television, when a local news station broke into programming saying that a rotation was spotted near Pinnacle Mountain.

“When I heard that, I knew if I walked out my front door, I could see Pinnacle Mountain,” he said.

Belew looked outside and could see the tornado heading their way.

“As I looked at it, my peripheral vision could not catch the outside edges of that storm,” he said. “I walked back inside, very calm, and I deadbolted the lock.”

Belew’s family, including their dog, took cover in their laundry room and held pillows over their heads to prepare for the EF4-rated tornado.

“The house started collapsing around us, and 20 seconds later, you’re digging yourself out,” he said. “We walked out without a scratch. It’s kind of amazing.”

Beebe said members of Beebe Cares organized Thursday’s cleanup effort on their own, which made him proud.

Members of the Beebe Cares committee recruited other volunteers to help with cleanup at Belew’s home.

"I don’t know how they recruit them all,” Beebe said. “It’s a tribute to our staff. I don’t have anything to do with it. I’m just here to support them and I’m proud of them.”

Belew’s family is rebuilding their Mayflower home and expects to move back into it in September.