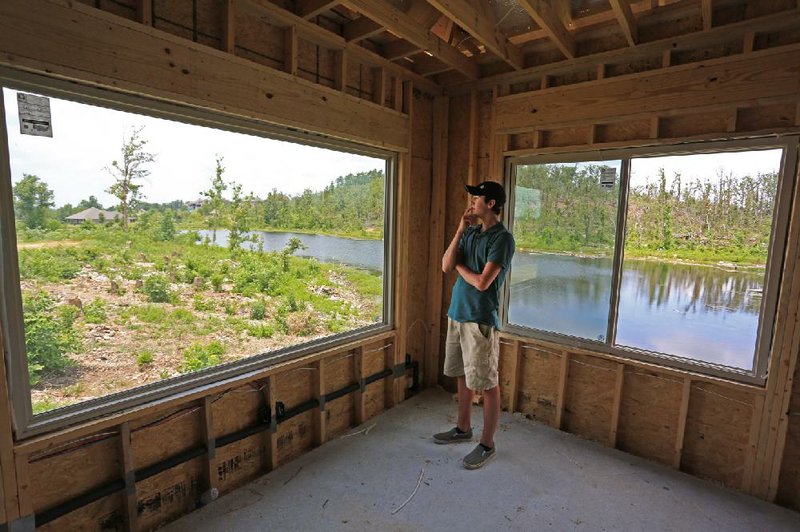 Chandler Belew, 19, looks out a window on Thursday in the family room being rebuilt in the home he shares with his parents, Donnie and Stacy Belew, near Mayflower. The April 27 tornado that struck Pulaski, Faulkner and White counties tore the Belew home apart, along with many others.

Correction: The River Plantation is a subdivision in Mayflower that was struck by the April 27 tornado that killed 16 people in Pulaski, Faulkner and White counties. Articles about the tornado’s aftermath May 11 and July 11 gave an incorrect name for the subdivision.

MAYFLOWER -- Beebe Cares, a volunteer group from the governor's office and other state agencies, gathered Thursday morning along 50 River Bend Road on the edge of Mayflower near the banks of the Arkansas River. 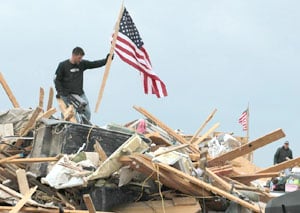 Someone had scrawled the number 50 in blue on a house that's being built there, where another one once stood until a deadly tornado destroyed it and many others in the Plantation Acres subdivision on April 27.

Beebe Cares, which does volunteer work for various causes once a month, chose to aid this site and the nearby area this month because that's where an Arkansas State Police trooper assigned to Gov. Mike Beebe's security team lived until the tornado ravaged parts of Pulaski, Faulkner and White counties.

The storm claimed 16 lives, 12 of them in Faulkner County and one of those in the Mayflower subdivision.

Cpl. Donnie Belew; his wife, Stacy; and their 19-year-old son, Chandler, survived by hiding in their laundry room and wrapping pillows around their heads.

On Thursday, 37 volunteers from Beebe's office, the Arkansas Forestry Commission, the state Department of Human Services and the University of Central Arkansas joined county crews in the cleanup, which is relying on tools of all sizes, from heavy equipment and flatbed trailers to trash bags.

During a brief visit to the neighborhood, Beebe shook hands with workers and spoke of the volunteer efforts the Beebe Cares team does, though he didn't take credit for the work.

It was their idea, the governor said."I didn't have anything to do with it."

Piles of concrete, a wagonload of chopped tree trunks and houses covered with blue tarpaulins point to the work remaining in Plantation Acres. Yet there has been "tremendous progress" in just more than two months, Beebe said.

"Some of the roughest times" tend to be after the first volunteers leave, he said.

A few feet away, a UCA student volunteer knelt to pick up two small, muddy teddy bears found in the rubble of what used to be the home of the Belews' neighbors, who have three children. Another student picked up a wheel small enough to have been on a toy wagon or a tricycle.

County crews began the marathon task of collecting storm debris in Vilonia just after the tornado hit and followed the storm's roughly 24-mile path back to Plantation Acres, just off Arkansas 365 and within sight of Pinnacle Mountain. This is the crews' third and final time to pick up the rubble, Faulkner County Judge Allen Dodson said.

"We've completed the final sweep everywhere except for" Plantation Acres and a few areas nearby, Dodson said.

Next will be moving and disposing of the debris, he said.

Donnie Belew said his rebuilt house should be finished in mid-September.

His memories of the Sunday evening that the tornado struck are still vivid. He walked outside his front door and looked toward Pinnacle Mountain after hearing televised weather warnings and telling his wife and son to get into the laundry room.

The twister "was coming across the river. It was sucking up river water," he recalled. He went back inside. "I thought then that this is it, this is the last time I'm going to see my family."

Conway police officer Sharen Carter said the tornado demolished half of her home, which is in the same subdivision. She has been living in a rented house next door while her house is repaired.

Carter, whose husband died about three years ago in flash flooding after another tornado, has been on leave but is preparing to return to work as a school resource officer.

She said she was "overwhelmed" at first by the devastation and the work that lay ahead for herself and her neighbors.

But as she watched the county employees and the volunteer workers sweating beneath the hot sun Thursday, she said, "The good people have brought me out of the depression."