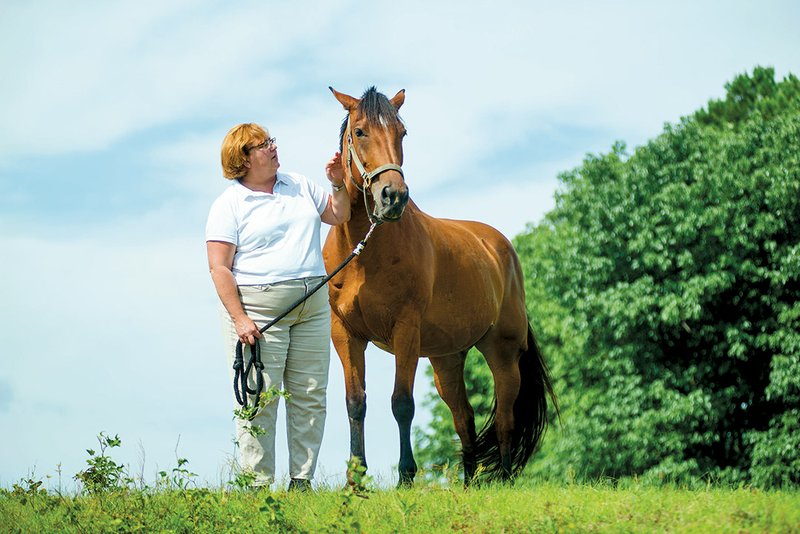 Catherine Swift of Clinton pets Porsche, her half-thoroughbred, half-Clydesdale horse that is registered through Pet Partners as a therapy animal. Swift, who also has a therapy dog, said she has taken Porsche to various venues, including Hendrix College in Conway for Arkansas Governor’s School students to visit with the horse. Swift said she’d also like to take Porsche to Clinton schools and the Van Buren County Library.

Catherine Swift’s pet, Porsche, stood out in a class to register therapy dogs — mostly because she’s a horse.

“She did everything a dog could do, except she couldn’t sit,” Swift said.

Swift, who lives in Clinton and is an instructor at the University of Central Arkansas in Conway, is a longtime animal lover. She is also the equestrian coach at UCA.

When she moved from Texas to Arkansas six years ago, Swift brought her therapy dog and Porsche, who is a half thoroughbred, half Clydesdale horse, she said.

Swift said the family utilized a two-horse towing trailer to move, and her pilot husband had started building a plane.

“We had a Clydesdale and half an airplane sticking out [of the trailer],” she said, laughing.

“Originally, I used dogs through Pet Partners to do visitation therapy [at] hospitals, nursing homes and [schools],” Swift said.

In Texas, her dogs were also registered as reading-education assistance dogs to help high-risk students.

Swift said Porsche, 13, was bred in Canada and was being used for fox hunting in Texas when she bought the horse.

“I thought, ‘Well, I’ve got this wonderful horse that can do almost everything a dog can do,” she said.

Swift took Porsche to be registered with Pet Partners, a national organization, to do animal-assisted therapy. It was done through ABLEPaws in Little Rock, a nonprofit group that sponsors the classes.

“I am the only one, thus far, in this area that has a horse,” Swift said.

Meredith Catlett of Little Rock, an evaluator with ABLEPaws, said “the human and the pet … have to pass a skills and aptitude test.”

“Obviously, Porsche’s very special. One reason is, most of our members, of course — the most common animal is the dog,” Catlett said.

“[Porsche] is our only Pet Partner horse, so she’s special to kids who get to see her. Of course, there are limitations on a horse there aren’t on a dog — she can’t go into a room at Arkansas Children’s Hospital,” Catlett said.

“Kids, they love her. It’s exciting to see them interact with an animal so big,” she said.

Catlett said Porsche is “very calm,” but part of the reason for her good behavior is Swift.

“We need to give a whole lot of credit to Catherine. She is, first of all, very experienced with horses and is just very, very good with children and introducing them to Porsche … and alleviating any fears they have,” Catlett said.

Georgann Freasier of Little Rock, a Pet Partners evaluator, instructor and handler, said she was there when Porsche was evaluated.

“If the horse was spooky or irritable about people around its flanks, they may be a great horse, but if they don’t have the right temperament, they can’t do it. Porsche is a superb

She echoed Catlett’s comments about Swift.

“She does a great job,” Freasier said.

Swift said she has taken Porsche to the William H. Bowen School of Law in Little Rock several times during final-exam week.

“We were out in the park, and wave after wave of students would come out and pet her and ask me questions and just kind of de-stress a little bit,” Swift said.

She has taken Porsche to Hendrix College in Conway to meet Arkansas Governor’s School students.

“Every year, I go back and take a dog or a horse and talk to students about using animals in academic and medical fields,” Swift said. “I’ve had Porsche there before, and students have come out, petted her and actually ridden her.”

This week, she will take Prissy, her Great Pyrenees therapy dog, and talk to Governor’s School students about disaster preparedness regarding animals. Swift is involved in helping draft an animal-

Porsche is in demand, though, and not just as a therapy animal. She also appeared at Lanterns! — a winter festival at Wildwood Park for the Arts in Little Rock.

“She’s been the Renaissance horse and would greet people at the gate,” Swift said.

“The funniest thing, on campus this spring at UCA, [was when Hughes Residential College] did an outdoor Battle Chess game,” Swift said.

Students created a life-size outdoor chess board and dressed as chess pieces. Porsche was there as one of the knights, “but she was a little too big” for the squares the students created, Swift said.

Porsche, one of four horses Swift has, also got experience participating in a cattle drive at the annual chuck-wagon races in Clinton. She also was filmed being ridden a couple of summers ago, and the video was shown in the background of Conway Dinner Theater’s production of Oklahoma!

Porsche has even more talents — she has participated in hunter-jumper and dressage shows, and one of Swift’s students once rode Porsche in a rodeo and came in second in pole bending.

“I now have a therapy dog again, so between the horse and the Great Pyrenees named Priscilla, I’m going to try to make contact within the Clinton area. I intend to try to do more programs here in Clinton — try to reach into the school system, even with the library, to focus on the reading and academics of therapy,” Swift said.

Catlett said big or small, “animals give us hope and healing. That’s something about that connection we have.”