Surprise party over for Auburn Tigers 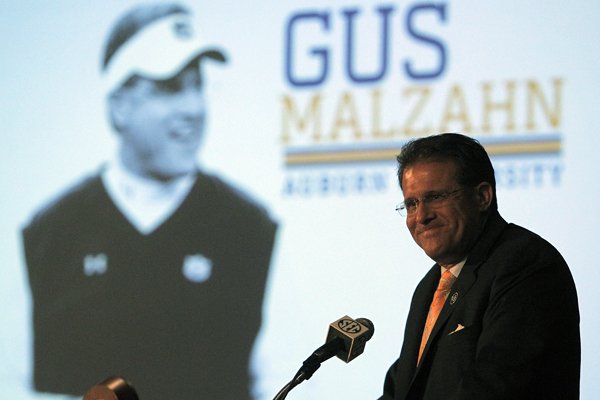 HOOVER, Ala. — Auburn's unexpected journey to the SEC championship and an excruciating loss to Florida State in the BCS national championship game last year has twisted the plot for the 2014 Tigers.

The hunter has now become the hunted.

"Last year were weren't on anybody's radar," second-year Auburn Coach Gus Malzahn said. "We snuck up on a lot of people."

The Tigers served as an inspiration for also-rans for years to come, improving from 0-8 in the SEC to capture the league championship and go 12-2 overall in the Fort Smith native Malzahn's debut season. Along the way, Auburn made plays -- like a tipped Hail Mary pass to beat Georgia and a 109-yard missed field goal return to beat Alabama -- that helped define college football in 2013.

"We've got our program back to where it should be," Malzahn said., "where people ... have us circled."

Auburn center Reese Dismukes said 2014 will be tougher than last season "as far as we're going to have a target on our back."

"I can't even remember what it was like after 2012," Dismukes said. "That seems like light years ago."

The Tigers led Florida State 21-3 late in the second quarter of the BCS championship game before losing 34-31 on a 2-yard touchdown pass from Jameis Winston to Kelvin Benjamin with 13 seconds left in the game.

"It was hard knowing that we were 13 seconds away from winning a national championship, and that's going to haunt us probably for the rest of our lives," Auburn tight end C.J. Uzomah said.

"You just have in the back of your head that you've got to be 13 seconds better in whatever you're doing," Dismukes said.

The Tigers have endured some adversity this summer, with quarterback Nick Marshall and cornerback Jonathan Mincy facing marijuana possession issues and defensive end Carl Lawson, an All-SEC freshman last year, likely out for the season after spring knee surgery.

It's too early to say whether those incidents are omens or speed bumps for the Tigers.

Marshall became the fourth SEC quarterback to rush for 1,000 yards last season, when he amassed 1,976 passing yards and 1,068 rushing yards and accounted for 26 touchdowns in his first year as a starter.

Marshall's path paralleled that of Cam Newton, who was dismissed from another SEC team (Florida) and transferred to a junior college before leading Auburn to the national championship in 2010.

Marshall will become the first college quarterback under Malzahn's tutelage to return for a second season, but many of the key pieces from last year, like tailback Tre Mason, the SEC's rushing leader with 1,816 yards and 23 touchdowns, left tackle Greg Robinson, the second pick in the NFL Draft, defensive linemen Dee Ford and Nosa Eguae, defensive back Chris Davis, the hero of the Iron Bowl, kicker Cody Parkey and punter Steven Clark are not returning.

The Tigers will require bigger contributions from receivers Quan Bray, Sammie Coates and Ricardo Louis, who was on the receiving end of the tipped 73-yard touchdown pass that stunned Georgia 43-38 on Nov. 16. Cameron Artis-Payne, Corey Grant, Peyton Barber and Roc Thomas will compete for reps at running back in Malzahn's hurry-up offense, which has racked up big numbers wherever he's been.

Malzahn, who has coached in two national championship games in the eight seasons since he left the Arkansas high school ranks to serve as offensive coordinator at Arkansas, said Auburn's 45-41 victory at Texas A&M last year served as a turning point in his mind.

"That was really the first time all year that I really let my mind go there, that 'Hey, we've got a chance to play with anyone if we can beat them on the road,'"he said. "I think our players felt the same way. When we left the field, that was kind of that new day to start off the second half of the season right."

The Tigers face an Arkansas team that went 0-8 in the SEC last season in their season and home opener on Aug. 30.

"I tell you what, that's definitely a challenge any time you open up your season against a conference team," Malzahn said. "We really expect Arkansas to be much improved."

The Razorbacks opened 3-0 before losing their final nine games.

"I know what 3-9 feels like," Wright said. "There's no bigger motivation than that. If you really have true athletes who give it their all -- workouts, class, football -- nothing else matters but those three things.

"We had high confidence and I'm sure that's what's going on over there. They're going to come with that fire and it'll be a good game."