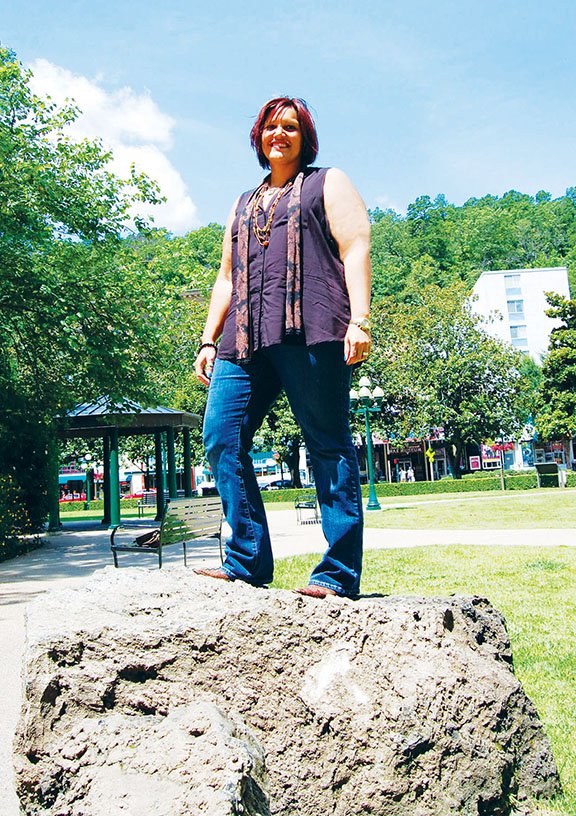 After graduating from Texas A&M, Kai Coggin became an English teacher in Houston. Just five years later, she was named one of Texas’ regional Teacher of the Year honorees. Then Coggin left to pursue writing poetry. She ended up moving to Hot Springs after she took a trip to nearby Mount Ida with her best friend, Joanne.

Almost every Wednesday night, Kai Coggin of Hot Springs can be found downtown on Central Avenue working in her chosen profession.

Wednesday night is poetry night at Maxine’s. The night spot offers an open microphone for those looking to showcase their poetry or music. For Coggin, her Wednesday-night moment on the stage has become a habit for almost a year.

During a time when the poetry slam is considered the state of that particular art, Coggin said, her poetry is a bit more traditional, but it is still delivered with a rhythm, passion, perhaps some anger and plenty of confidence.

“I have yet to read anyone’s words that came closer to creating a visual image so quickly and so strong; it is akin to observing,” said Suzanne Davidson of the Hot Springs Board of Directors and a member of the Arkansas Arts Council. “Hearing [Kai] read her work, one doesn’t just see these images, but senses and shares the emotions she captures with crisp and swift language.”

Coggin has been self-publishing chapbooks for almost a year. Her first “real, hold-in-your hand” book of poetry, Periscope Heart, is due out from Swimming With Elephants Publications in New Mexico before the end of the year.

While her publications and the performances in Hot Springs have not quite built a full living wage for Coggin, she said she feels she is establishing herself. Next week, the Spa City poet will read her poetry and work with other poets and authors at the Pink Door Women’s Writing Retreat in Rochester, New York.

“It’s a writing weekend that is an alternative to the high-price academic writer conferences,” Coggin said. “It is an incredible honor for me as a poet and a woman to be invited to the event, as only 100 female poets across the country were invited.”

The retreat is run by nationally known poet Rachel McKibbens and takes place in her home.

“All of us are camping out gypsy-style,” Coggin said. “A lot of the community in Rochester will come to hear us read our work, to show their support and — I hope — to buy books.”

Last month, a Wednesday poetry night at Maxine’s featured Coggin, and many of her fans in Hot Springs raised the funds needed for her airline ticket to Rochester.

“This could only have happened in Hot Springs,” Coggin said. “If this had happened in Houston, no one would care. It is different here.”

Raised in Houston, Coggin said she and her best friend, Joanne, discovered Hot Springs as a “fluke” during a vacation trip from Texas to Mount Ida. A short while later, Hot Springs was home for Coggin.

“Hot Springs is a special place. It has a real arts community where all kinds of creative work, including poetry, have a place and a following,” Coggin said. “We looked around town and found a sweet spot. Hot Springs is a touch of the city surrounded with so much nature, and the free clear water from the springs is just a great bonus.”

Coggin’s life before her poetry caught fire in Arkansas is even more exotic and interesting than her finding Hot Springs in the first place.

Coggin was born Kimberley Katherine Coggin in 1980 in Bangkok, Thailand. Her mother, Ester, was from the Philippines and once traveled from village to village reading poetry, and Coggin’s father was Don Coggin from Georgia, a journalist from the Associated Press and Time magazine.

“They met in Hong Kong,” Coggin said. “Kai was a spiritual name given to me six years ago, after I shed all the trauma and pain of my past and I wanted to rise anew.”

Her father was one of the few journalists to slip into what is now Bangladesh in 1971 when the Pakistan military cracked down on the eastern wing of Pakistan as Bengalis tried to break away and form a separate country. He covered the fighting and what is considered the genocide of around 3 million people.

While growing up in Houston, young Kimberly Coggin said she wanted to be a doctor or nurse.

“All Filipino women are nurses, right?” Coggin said Wednesday during a walk through the Arlington Lawn.

She entered Texas A&M University in College Station, Texas, as a premed major, and was a member of the student military Corp of Cadets and a drummer in the marching band.

Coggin said finding herself “living in uniform” and enduring freshman hazing was stressful. She said she was supposed to be working on the students’ huge annual bonfire stack in 1999 when it collapsed, killing 12 students and injuring 27 more.

She resigned from the Corps but remained at school, majoring in English and creative writing. She said the attention given to her work by a professor at the university would be a major influence later on.

“He said I was a neo-beatnik poet,” Coggin said. “I liked the idea of that.”

After graduation, Coggin became an English teacher and was named a regional Teacher of the Year in Texas.

She said that as a teacher, she had put much of her poetry aside, but the urge to work on it returned after the death of her father.

“When he passed away, I wrote an article about him and his years with the magazine for Time,” Coggin said. “It was never published, but writing it awakened something I had put away for a while.”

She said she wrote her father’s eulogy on her smartphone and read it during a memorial service, and a new phase of her life began.

“A found some old poems I wrote in college, and I started typing them out as a gift to my friend,” she said. “I tinkered with them, and soon there were 30 pages, then 60, and now it is more than 250 pages and the basis of my book.”

Her poems include titles like “Practicing my come hither smile,” and “Before picture.”

The last one is about losing weight, Coggin said, but she found that her new look made old friends uncomfortable.

With an appearance at the writers’ workshop and performances outside the region, Coggin said she hopes her work will strike a spark and grow into the warm fire of a career. However she plans to remain based in Hot Springs.

“I am looking to working with the Arkansas Arts Council as a member of the Arts in Education program,” she said. “I am anxious to get back to the classroom and take poetry to the schools.”

The program initiates new arts programs in schools by providing working artists in residence and exposing students to the creative process through contact with professional artists.

“I used to teach high school in Texas, and I will be working with elementary-school-age students in a program at Emergent Arts here in Hot Springs. I want to get out there and be an enthusiastic role model for young people and get them to writing.”