Wednesday's storms brought powerful winds and torrential rains to many areas. Trees and power lines were downed, but no injuries have been reported. At its peak, Entergy had more than 40,000 customers without power.

University of Arkansas Cossatot Community College in DeQueen and its campuses in Ashdown and Nashville were closed Thursday because of storm damage. They were expected to reopen at 7:30 a.m. Friday.

The National Weather Service said areas in Northwest Arkansas saw 1 to 2 inches of rain, with some isolated areas receiving more than 3 inches of rain during the storm.

The weather service received dozens of reports of damage from a wide swath of the state, though none indicated any injuries. Among the reports were: 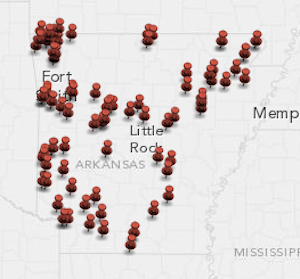 Click here to browse an interactive map of damage reported across the state in Wednesday's storms.

Arkansas Online contributed to this report.