Everything you need to know about night-fishing lights 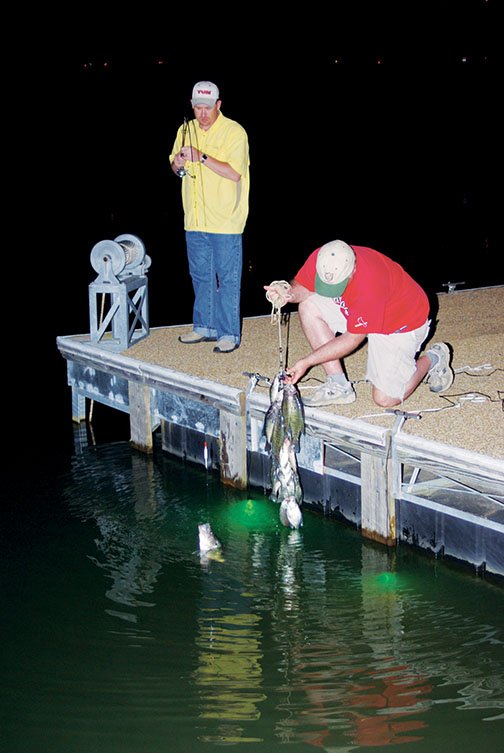 Fishing lights are often used by anglers in boats, but they’re equally effective when fishing around docks, piers and other shoreline structures.

Night fishing can be an exhilarating experience, full of mystery and expectation. When will something take the bait? What will it be? Will I overcome it, or will it overcome me?

If you hook something big, you hope it’s a trophy fish. But you’re never really sure. You don’t know what’s down there, and you won’t know for certain until you reel it up from the depths. That’s what draws a hard-boiled fraternity of anglers to this witching-hour sport.

Exciting? Definitely. Memorable? Always. Night fishing is a pursuit like no other.

You can catch many fish during daylight hours, but during summer, the odds for success often improve if you fish between dusk and dawn.

If you do go night fishing, you’ll need lights — not just lights to see by, but specialty lights that draw sport fish close to your boat. The latter work by attracting tiny animals called zooplankton, which attract baitfish such as shad, herring and minnows, which in turn attract predator fish such as bass, crappie and walleyes. Sport fish gather near or in the circle of light to feed. The angler drops in a bait or lure to catch them.

Three primary types of specialty lights — floating fishing lights, submersible fishing lights and black lights — are used for night fishing. Floating and submersible lights are used to attract fish and can be used separately or in combination. Combinations — a pair of floating lights positioned above two submersible lights, for example — tend to be more versatile, lighting multiple levels of the water column to attract fish no matter where they are, while also providing more above-the-water lighting for tying knots, hooking bait and unhooking fish. Black lights are used primarily to illuminate fishing line, allowing the angler to determine what’s happening below by seeing, rather than just feeling, line movement.

Early fishermen often used torches to illuminate the water where they fished. Lanterns have also been used for decades, including the veritable Coleman lantern, a mainstay among many night fishermen even now.

One of the earliest specialty lights used for night fishing was a traditional floating model featuring a Styrofoam flotation ring surrounding a white, sealed-beam light similar to a vehicle headlight. This type of light is inexpensive and still widely available. Most run off 12-volt systems, with alligator clips attached to battery posts for power. The angler places the light (sometimes several lights) beside the boat, where it floats with the beam of light pointing down to attract baitfish and game fish.

In recent years, floating lights with more energy-efficient LED or fluorescent illumination have become widely available. Also, green lights have become available in addition to white. Power for these models may come from standard 12-volt alligator clips, a cigarette-lighter plug or alkaline batteries. A molded handle on some of these units allows them to double as spotlights, camp lights or boat lights. The best also have safety fuses and long, safely insulated cords. Some have a built-in black light on top to help illuminate your line.

Floating lights were the standard of night fishermen for many years, but the users of these lights often had to contend with annoying swarms of insects drawn to the lights along with fish. For this and other reasons, submersible lights were developed that slide beneath the surface and light up the depths. Battery-powered, 12-volt, LED and fluorescent models are available, with white or green lights.

Many submersible models are weighted internally or otherwise constructed so they sink immediately when put in the water. Others sink only after the addition of a weight to a swivel clip on one end of the light. These lights float without a weight, so the user can vary where they are positioned in the water column for increased versatility. Submersible lights that use fluorescent bulbs are often available in different lengths (9-inch and 21-inch, for example) as well.

Fishing lights are available in two primary colors: white and green. You might wonder why red lights aren’t used, or blue or purple. Why white and green? And which color is better? Does it really matter?

Darrell Keith, founder of Hydro Glow Fishing Lights (www.hydroglow.com) in Dawsonville, Georgia, has spent years studying how lights attract fish. He said white and green wavelengths of light are most attractive to plankton. Plankton is a primary food of many baitfish, so when plankton gather in the lighted portion of the water, baitfish move in to enjoy the banquet. The baitfish in turn attract game fish looking for an easy meal.

“Plankton migrate to light for reproduction,” Keith said. “And green has the best ability to cause this to happen. White works, too, but white light is absorbed very quickly in water. It doesn’t penetrate very deep, so it’s less effective than green, which maintains its color character at much greater depths.”

Some fish — baitfish and sport fish — are attracted directly by the lights rather than the plankton or bait, and once again, green is superior for this purpose.

“Blue, like green, has a greater distance of effective area,” Keith said. “But for some reason, blue light works in saltwater but won’t attract bait in fresh water. For example, when we dropped a blue light in a freshwater lake in North Carolina, blueback herring wouldn’t come to it. But green light was very attractive to these baitfish.”

In some experiments, Keith put five different colors of lights in the water at the same time, and green always attracted bait (thus sport fish) far better. This fact is common knowledge now among manufacturers of fishing lights, so green lights have quickly become most prevalent. White lights are still available and still effective to some extent, but not as effective as green. So when you have a choice, purchasing green lights is probably the best option. And if you still have white lights you use, adding one or more green lights will increase the effectiveness of your illumination efforts.

Black (ultraviolet) lights are also useful night-fishing aids. Black lights illuminate fluorescent monofilament, making it more visible over a greater distance. When the ultraviolet lights are on, you can keep an eye on your line and watch for the slightest twitch or movement, indicating a bite. Rods with fluorescent tips also glow brightly under black lights. And a dab of fluorescent paint on frequently used tools, and tackle will glow, too, so the items are more easily found when you need them.

Most black lights run off a 12-volt electrical system or several D-cell batteries. Higher-end models often come with features like the addition of green and/or white lights that can be used while rigging, cleaning or performing other general topside tasks; switches that allow you to turn on just the number of lights needed; and cordless, rechargeable construction that allows you to charge the unit at home with a 110-volt charger. Many have suction-cup feet for temporary rail mounting, and a few come with plug-in jacks that can be permanently installed on boat rails for easy on-off use.