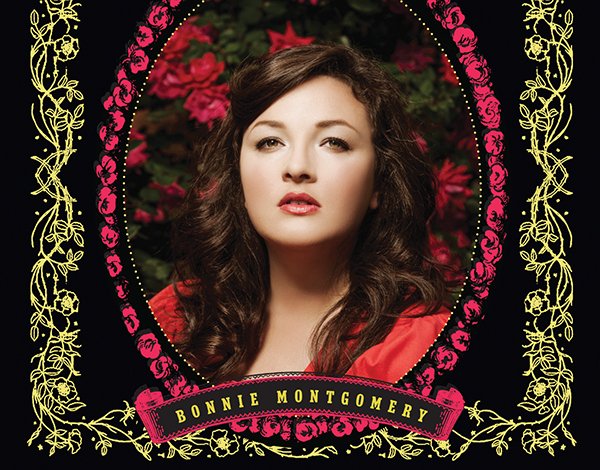 At last. Bonnie Montgomery’s self-titled debut album is the album fans of the White County-raised singer-songwriter have been waiting on. Not that her EPs, 2012’s Cruel and last summer’s Joy, are inconsequential releases. And her 2011 album, Live At the Cake Shop, is also not a negligible work. Same with Billy Blythe, a modern folk opera about the childhood of Bill Clinton, with Montgomery supplying the music and Britt Barber the words.

But Cruel was three songs. Joy only two tunes. These EPs were mere nips of Montgomery’s musical talent. Just brief glimpses. Finally, with the July 29 release of Bonnie Montgomery on Fast Weapons records, the classically trained singer, who wields her operatic voice on honky-tonk flavored tales, delivers a full shot of her Americana music. The results are stunning.

Packing 10 songs in 33 minutes, some of the songs of Bonnie Montgomery are familiar. Both “Joy” and “Daddy’s” from the Joy EP appear on the new album. And songs such as “Lost at Sea,” “Cropdust Skies” and “Nashville” were featured on Live At the Cake Shop. Consider these Montgomery’s classics.

“Nashville” is the second song on Bonnie Montgomery, a track with a freight-train country rhythm, and Montgomery, who lived in Nashville, Tennessee, for a while before moving back to Little Rock in late 2009, sings somewhat autobiographical on the track, “I’m giving up Nashville, and this deal. And I am thinking, that this is for real. Because you have taken, some of my joy.” Montgomery’s band follows her narrative with a steady, boom-chicka-boom beat.

“Daddy’s” is a little more cautious in its delivery, and a little more elegant, too, with its soft strings and gently strummed acoustic guitar. “Cropdust Skies” revisits a country rhythm with a touch of resonating guitar, and Montgomery sings of the rural Delta life, “I remember well how the horses felt on the farm in the field. And the catfish ponds, and your airplane wings, over hills and trees in the summer heat.” “Lost at Sea” is a barroom, country waltz, with a touch of honky-tonk piano.

But out of the previously heard songs, all great, “Joy” is the gem. The song is a galloping, twang-powered tune, with Montgomery’s lyrics — “Back in 1924, in the year that I was born, on a hill on a mountain they call Joy” — arranged from her grandfather’s journals that he kept from 1948 to his death in the ’90s. There’s a thunder-from-the-mountain sound to “Joy,” with its deep-bass rhythm and thunderbolt guitar breaks. But even through the stormy music, Montgomery’s voice is powerful, reaching over the darting rhythm of the song.

The old and new songs on Bonnie Montgomery form a cohesive whole, and neither the previously released numbers nor the latest tunes from Montgomery seem out of place on the album. The five new tunes were written specifically for Bonnie Montgomery, and many of the musicians who played on the old tracks also appear on the new numbers. While Montgomery performs in several band configurations, her full-length debut features Paul Griffith on drums, Alex Piazza on steel guitar, Geoffrey Robson on fiddle, John Willis on piano, Jimmy Young on upright bass and Nathan Howdeshell on electric guitar. (Howdeshell, also a White County native, is a member of Gossip and proprietor of Fast Weapons, and backs Montgomery during live shows along with Young and drummer Justin Collins.)

Bonnie Montgomery opens with the new song “Black County,” a purposeful Americana track with lightning-crack guitar stabs, with Montgomery confessing, “Should’ve stayed in Black County and married my John. Would’ve been better off never leaving the farm. But the wild world was calling, so I said that I’d go. So, I left old Black County just to search for my soul.” Replace Black County with White County, and the opener takes on some sort of autobiographical telling.

“Diamond” is another song employing reverb-heavy guitar, but a tender rhythm with Piazza punctuating the song with melting steel guitar. “Blood from a Turnip” is a return to benevolent Americana and a tale of a compassionate soul who learns from a hard-luck life: “They all said that her momma died too early, and her daddy, they say, that he’s in jail.” Album closer “But I Won’t” is one more shot of Montgomery and band’s hot-shot rockabilly country music.

But “Take Me or Leave Me” is the most fully realized of the album’s new songs. What starts as an ominous folk tune transitions into a country rock ’n’ roller, a remarkable song that shows the depth of Montgomery as a songwriter, singer and musician, as well as the talent of her backing musicians. “Take Me or Leave Me” is a powerful symbol of what Montgomery offers with her music and her voice. The track leaves one wanting more, as does the rest of Bonnie Montgomery. And the album proves Montgomery is well worth the wait.

Bonnie Montgomery’s self-titled debut album is available via all major digital music outlets, including iTunes and Amazon.com. The full-length record is also for sale at shows and online through Fast Weapons records at fastweaponsrecords.bigcartel.com. On Aug. 8, Montgomery plays a record release show at White Water Tavern with the music starting at 9:30 p.m.

For more on music in central Arkansas, check out Shea Stewart’s blog, Facing The Music.