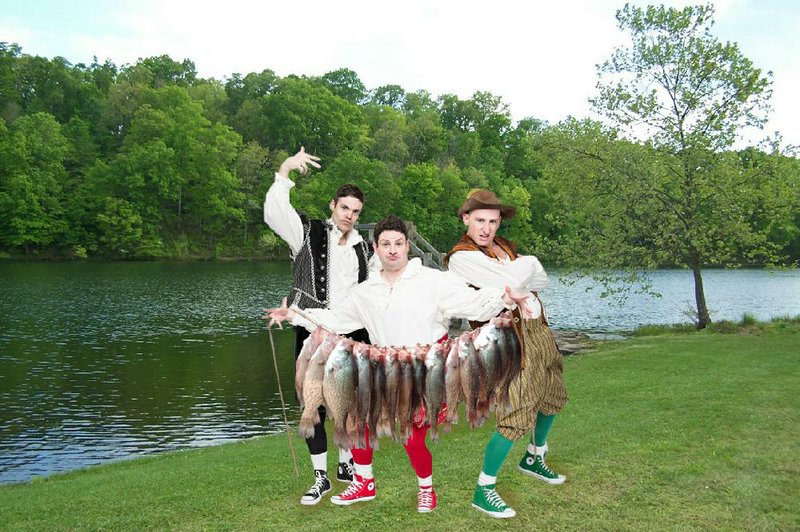 William Shakespeare wrote some plays, some serious and some not so much.

And that could serve as the "abridged" biography of the world's most famous playwright, who will get the treatment this month at the Arkansas Repertory Theatre with The Compleat Wrks of Wllm Shkspr (Abridged), a comedy written by Adam Long, Daniel Singer and Jess Winfield.

Sign-interpreted performance for the hearing impaired: Wednesday (June 11 only)

The three playwrights first presented their parody at the Edinburgh Festival Fringe in 1987, and it later ran for nine years at the Criterion Theatre in London.

Nicole Capri -- who is usually herding young thespians during this time of the year -- is directing the show, but she notes that the play, which itself has an "abridged" cast of three, has her working with a trio of young actors not far removed, maturity-wise, from her usual charges in the Summer Musical Theater Intensive training program.

"It's a cast of three, but they play about a thousand characters," Capri says. "There are 37 plays, covered in 97 minutes. It's kind of a cross between Greater Tuna meets Shakespeare meets a boys' locker room.

"Some might compare it to a Saturday Night Live approach to Shakespeare."

The cast consists of Avery Clark, Ethan Paulini and Patrick Halley, the only newcomer to the Rep. Paulini returns for his fifth production, having appeared in The Full Monty, Tommy, White Christmas and Avenue Q. Clark's Rep resume includes roles in The 39 Steps and Death of a Salesman and -- ever so appropriately -- the title roles in a pair of Shakespeare's plays: Henry V and Hamlet.

"I think our performance of Hamlet takes about 43 seconds, total," Clark says. "Our goal is to set the land-speed record for the fastest Hamlet anyone has ever seen. It's a very Monty Python-esque approach, with a lot of men in tights, men in dresses, impersonations, ugly wigs.

"The thing about our production is how much we are working to connect it to Arkansas. There's a lot of specificity with jokes connected to the state and community, to make everything feel very personal and local."

Paulini says none of The Bard's works will be ignored.

"Each play is touched on at least once, some more in depth than others," he says. "The more well-known ones we tend to spend more time on, but we cover the entire canon in an hour and a half."

Halley notes that the three actors manage to incorporate much of their own peculiar senses of humor into the script, which invites such a flexible approach.

"We're basically playing ourselves, so we get to infuse a lot of ourselves into the show," Halley says. "We play a traveling troupe of performers whose goal in life is to spread Shakespeare to the masses, and our truck breaks down in the middle of nowhere, and so we're forced to present the show and make do with what we have. So it's a very madcap situation."

The setting is "the middle of nowhere," with some southern and Arkansas nods.

"There are references to Duck Dynasty and duck calls and references to Whole Hog Barbecue that find their way into the show," Clark says.

There will be a panel discussion from noon to 1 p.m. today in Sturgis Hall at the Clinton Presidential Center, with Bob Hupp, the Rep's producing artistic director, and the play's cast members. See therep.org or clintonschool.uasys.edu for more information. Call (501) 683-5239 to reserve seating.

At 5:30 p.m. Monday, Hupp will present an abridged history of Shakespeare, his life and his works. The event is free to members of the Rep's support organization, $10 for nonmembers.