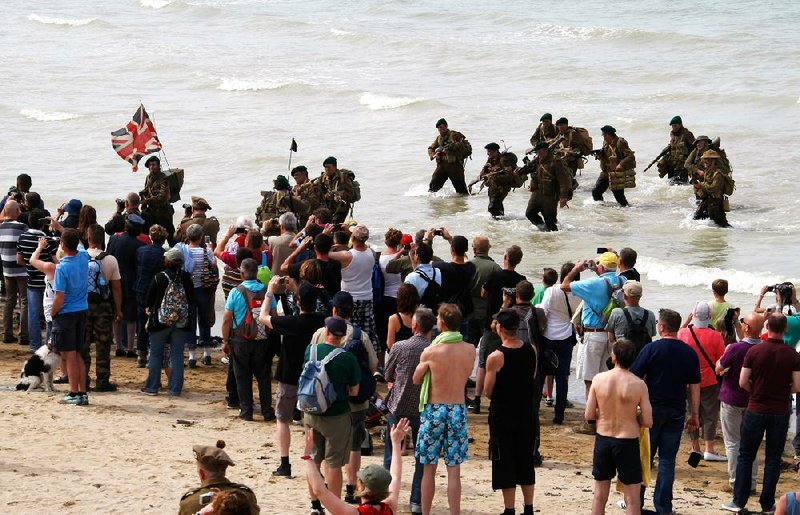 A group of military re-enactors feign a landing of a World War II barge, on the beach of Arromanches, France, Friday, June 6, 2014, as part of D-Day commemorations. World leaders and veterans gathered by the beaches of Normandy on Friday to mark the 70th anniversary of World War Two's D-Day landings. (AP Photo/Claude Paris)

COLLEVILLE-SUR-MER, France -- They rushed the shores of Normandy 70 years ago in a daring gambit to expel despotism from Europe, and on Friday, they returned as members of a disappearing generation to commemorate D-Day.

"Gentlemen, we are truly humbled by your presence today," Obama told the aging veterans who sat behind him. Many of them rose slowly -- if they could -- to accept the applause.

Obama and French President Francois Hollande delivered tributes under a blue, sunny sky at the French-American commemoration at the Normandy American Cemetery and Memorial at Omaha Beach in Colleville-sur-Mer, France. F-15 fighter jets flew above in "missing man" formation, and 14,000 people stood in honor.

"Here, we don't just commemorate victory, as proud of that victory as we are; we don't just honor sacrifice, as grateful as the world is; we come to remember why America and our allies gave so much for the survival of liberty at its moment of maximum peril," Obama said. "And we come to tell the story of the men and women who did it, so that it remains seared into the memory of the future world."

The D-Day invasion accelerated the end of the war in Europe and helped alter the course of history. It cracked Nazi dictator Adolf Hitler's western front as Soviet troops made advances on the ground in the east. And the amphibious invasion launched the weeks-long Battle of Normandy, which sent the Allies to Paris and pushed the Nazis out.

But 70 years later, the Americans and Russians returned to Normandy not united against a common enemy but in a confrontation with one another over Putin's decision to annex the autonomous Ukrainian region of Crimea earlier this year and provide support for separatists in Ukraine's east who are stirring unrest and violence.

But while the Ukrainian crisis cast a shadow over the D-Day celebrations, neither Obama nor Hollande addressed it at the main event.

Describing the nearby shoreline as "democracy's beachhead," Obama said the Allied victory "shaped the security and well-being of all posterity" and spurred democratic movements around the world.

"We worked to turn old adversaries into new allies. We built new prosperity. We stood once more with the people of this continent through a long twilight struggle until finally, a wall tumbled down, and an Iron Curtain, too," he said.

"That would not have happened without the men who were willing to lay down their lives for people they'd never met, and ideals they couldn't live without."

In his tribute to the veterans -- some of whom lied about their ages so they could go to war earlier, some of whom were told they were too uneducated to pilot planes and so became paratroopers instead -- Obama drew a direct line between their stories and the surrounding land.

"America's claim -- our commitment -- to liberty, our claim to equality, our claim to freedom and to the inherent dignity of every human being, that claim is written in the blood on these beaches, and it will endure for eternity," he said.

Nearly 4,500 Allied troops, more than half Americans, died on the invasion's first day -- a loss of life Obama suggested might not be tolerated in today's culture.

"In our age of instant commentary, the invasion would have been swiftly and roundly declared, as it was by one officer, 'a debacle,'" Obama said. "But a race to judgment does not take into account the courage of free men."

Recalling the stories of the veterans who made it to Omaha Beach for Friday's commemoration, Obama connected their sacrifices to those of another generation -- "this 9/11 generation of service members" -- who also "chose to serve a cause that's greater than self."

"Your legacy is in good hands," he told the D-Day survivors. "In a time when it has never been more tempting to pursue narrow self-interest and slough off common endeavor, this generation of Americans, our men and women of war, have chosen to do their part, as well."

And in telling the stories of the veterans of Iraq and Afghanistan, he pledged that "future generations, whether 70 or 700 years hence, will gather at places like this to honor them -- and to say that these were generations of men and women who proved once again that the United States of America is and will remain the greatest force for freedom the world has ever known."

The president brought his personal stories to the moment, talking about his grandfather, Stanley Dunham, who served in Gen. George Patton's army. In impromptu remarks, he said, "As I was landing on Marine One, I told my staff, I don't think there's a time where I miss my grandfather more, where I'd be more happy to have him here, than this day."

And he related his close bond with Army Sgt. 1st Class Cory Remsburg, whom he first met in Normandy five years ago during the 65th anniversary of D-Day. Remsburg suffered severe injuries in Afghanistan, and Obama has checked up on him over the years. He featured him in this year's State of the Union address.

"Over the past five years, Cory has grown stronger, learning to speak again and stand again and walk again. And earlier this year, he jumped out of a plane again. The first words Cory said to me after his accident echoed those words first shouted all those years ago on this beach: 'Rangers lead the way.'"

After their remarks, Obama and Hollande laid a wreath and stood for a 21-gun salute. Then, they walked over to a grassy overlook to observe Omaha Beach directly. Obama put his hand on Hollande's back, and the two pointed out to sea.

Earlier Friday, in nearby Vierville-sur-Mer, veterans from the U.S. 29th Infantry Division returned to the shores of Omaha Beach at dawn, 70 years after their first landing on the beach.

At 6:30 a.m., the precise hour that the first waves of infantry began wading ashore under a storm of German machine-gun and mortar fire, the men -- most now in their 90s -- raised glasses of apple brandy to the memory of friends killed that day.

A military band of serving 29th Division members played taps and "Amazing Grace" before the seven veterans walked off the beach to the applause of hundreds of onlookers.

The 29th, a National Guard formation nicknamed the Blue and Gray, was one of six Allied infantry and three airborne divisions that assaulted a 50-mile stretch of heavily defended coastline. Nearly 1,000 members of the division were killed, wounded or went missing on the invasion's first day. Thousands more died in the ensuing three-month Battle of Normandy in addition to some 20,000 French civilians killed in Allied bombardments.

Retired doctor and author Harold Baumgarten, 89, of Jacksonville Beach, Fla., has returned to Normandy many times over the decades.

"I landed on this beach in the first wave and I got wounded five times -- three times on D-Day and twice on June 7," Baumgarten said. "I had to stop. I ran out of blood."

Another 29th Division veteran paid tribute to "those guys on the bluff" -- referring to the 9,387 men killed during the battles in the summer of 1944 who are buried at the U.S. cemetery in Colleville-sur-Mer.

"They're the ones that are responsible for guys like me and the rest of the vets you see to get back home," said Steven Melnikoff, 94, of Cockeysville, Md.

"They paid the price. They are the heroes," he said. "We have a lot of people with a lot of ribbons, but those guys probably didn't get a single ribbon. But those are the guys I come back for."

The French president also paid tribute to the American dead.

"France will never forget what it owes these soldiers, what it owes the United States," Hollande said at the cemetery. "Vive l'Amerique! Vive la France! And long live the memory of those who fell here for our liberty."

Information for this article was contributed by Zachary A. Goldfarb of The Washington Post; by Greg Keller and Mark Carlson of The Associated Press; by Margaret Talev and Julianna Goldman of Bloomberg News; and by Kathleen Hennessey of the Tribune Washington Bureau.