Floyd to Baptist pastors: Go up, come down, lead 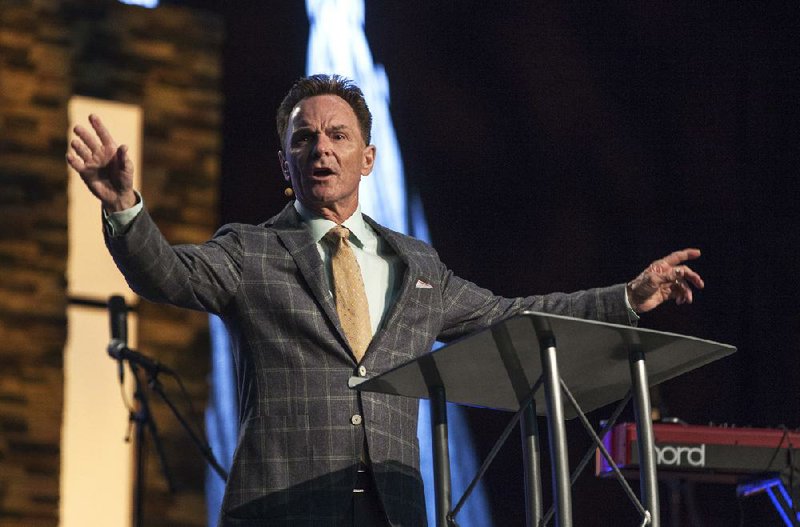 BALTIMORE -- In front of thousands of other Southern Baptist pastors Sunday, the Rev. Ronnie Floyd displayed on a big-screen television a picture of his grandson who just turned 4 years old that same day.

The senior pastor at Cross Church in Northwest Arkansas told his fellow pastors that one day, his grandson got hungry. Sneaking into the kitchen, the grandson opened the refrigerator and scaled up the panels inside the door just to reach one slice of cheese, Floyd said.

Floyd opened up the two-day Pastors' Conference, which precedes the annual Southern Baptist Convention annual meeting, where Floyd is one of three pastors who will be nominated to be the next president of the nation's largest Protestant denomination. The other nominees will be the Rev. Jared Moore, pastor at New Salem Baptist Church in Hustonville, Ky., and the Rev. Dennis Kim, senior pastor at Global Mission Church of Greater Washington in Silver Springs, Md.

Arkansas delegates, also known as messengers, usually make up between 3 percent and 4 percent of the convention's annual attendance, convention spokesmen said. Their votes will help elect the next president.

The pastors are gathering as their denomination is experiencing a seventh-consecutive yearly drop in church membership, as well as a two-year drop in baptisms.

At the Pastors' Conference on Sunday, the Rev. Bruce Frank, pastor at Biltmore Baptist Church in North Carolina, said pastors "are the most worn out," discouraged and distraught.

"What we're praying for is for God to speak to you," Frank said. "You be the person that engages and is open because there's a lot of things God wants to do in your life this week."

Minutes later, Floyd -- whom Frank called a "pastor of pastors" -- urged the other Southern Baptist pastors to, like his grandson and Moses, go up to God, come back down to be with the people and lead forward.

"That's the second action he did: coming down," he said. "Oh, listen, Moses also came down."

He did so continuously, Floyd said.

Some pastors are distinguished by their charisma, their intellect or even their discipline, Floyd said.

"All of those are your friends if you have them," he said. "But listen to me, if that's all you have, you have very, very little to offer. Because the only thing we ultimately have to offer is the gospel of Jesus Christ. That is what sets us apart as the people of God."

Other pastors count on other things, he said.

But that isn't what matters, he said.

"The only thing that distinguishes us is not our personality," Floyd said. "They're a dime a dozen. The people we know, everybody else knows them. It's the power and glory of God."

The Pastors' Conference will continue today and the annual meeting will be held Tuesday and Wednesday.