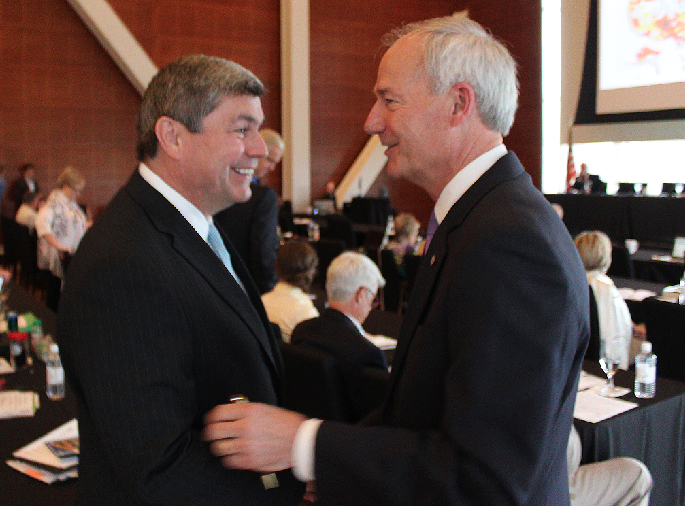 Former U.S. Rep. Mike Ross said Friday that he would work as governor to protect funding for the state's private option Medicaid expansion, while his opponent, former U.S. Rep. Asa Hutchinson, said further study is necessary to determine if an extension is warranted.

Hutchinson noted that the private option has provided health care so far to thousands of people and a needed financial boost to rural hospitals. But, he said, it needed to be evaluated "long-term" to see whether it's affordable and should be continued.

The state Legislature narrowly approved funding for the program earlier this year by a three-quarters vote, but it must do so again next year to continue it. It's unclear if the votes will be there to reauthorize it.

Hutchinson called it a "debate on whether we're going to extend insurance coverage for the working poor."

"I am optimistic that our legislators in our state will do the right thing with the 150,000 that have enrolled in the private option," Hutchinson said. "We'll do the right thing in terms of making the adjustments that are needed to reflect the values of Arkansas and to make sure this program is an incentive for people to work and not an incentive for people not to work."

He added later that doing away with the private option would say "we're going to subsidize middle income folks but we're going to leave the working poor out of the equation."

"And so that puts us in a quandary in Arkansas," Hutchinson said.

In his remarks, which followed Hutchinson's, Ross said it doesn't make sense to turn down the federal money for the private option. He said some rural hospitals would close if it isn't reauthorized.

But, he said, the biggest reason he supports the program is because it helps people who are "trying to do the right thing and stay off welfare and working the jobs with no benefits."

"As a Christian, I think it's the right thing to do," he said. "And I'm going to do my best as governor to make sure we continue to fund it."

In remarks afterward, Ross said he believes legislators will ultimately vote to continue the private option because not doing so would be so harmful to rural hospitals and because it would take health care away from those already enrolled.

"When you combine all those factors, I think at the appropriate time, at the end of the day, a lot of the political rhetoric will subside and people will do the right thing and renew the funding for the private option," he said. "I just have trouble believing the legislature is going to refuse 900 million of our tax money and stop it from coming back to Arkansas."

Ross and Hutchinson offered responses on a variety of topics during the caucus, which is in its second day at the Clinton Presidential Center.

Ross detailed his plan to expand pre-kindergarten offerings, saying studies show children who attend are more likely to graduate high school and go to college. But Hutchinson criticized the plan, saying the state isn't funding its existing pre-K program and can't afford to expand it.

"I think it's the wrong direction for us," Hutchinson said. "There's a lot better ways to use that money."

And each candidate pitched his tax plan: Hutchinson calling for a gradual reduction in income tax rates so Arkansas can be "competitive" with surrounding states and Ross detailing his proposal to index the current tax brackets to inflation.

That was done in a 1997 law, but it wasn't applied retroactively. Ross' proposal would do so and would shift the top income bracket from those making $34,000 a year to those making $75,100 a year, he has said.

"There's nothing fair about [the brackets now] and as governor I'm committed to fixing it," Ross said.

Democratic U.S. Sen. Mark Pryor and the two ex-congressmen running for Arkansas governor are among the speakers set to appear at the second day of the Delta Grassroots Caucus conference.

The caucus planned to hear from candidates and other officials Friday about issues related to the Delta. Pryor is facing a re-election challenge from Republican U.S. Rep. Tom Cotton.

Gov. Mike Beebe opened the first day Thursday of the caucus's conference, which provides an opportunity for the candidates for Arkansas governor, U.S. Senate and the three congressional districts with November elections to speak and answer questions. The caucus, which represents the states that make up the Mississippi Delta region, for the first time moved its meeting from Washington, D.C., instead choosing the Clinton Presidential Center in Little Rock.