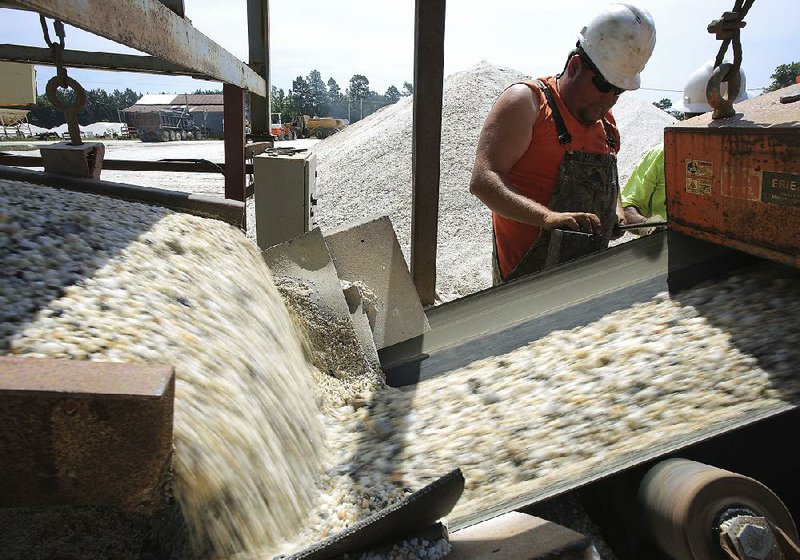 SHERIDAN -- The quartz in Premier White, a pure white sand that's a favorite at golf courses around the South and Midwest, comes out of the ground in Sheridan looking like dirt.

The sand has made national television, too. Every bunker shot from the PGA Tour's Byron Nelson Championship and Crowne Plaza Invitational kicks up some Premier White.

Company General Manager Will Hayden said the sand is praised by both golf course superintendents and golfers. He said superintendents like the aesthetics of the pure white sand and its drainage and packing capabilities. Golfers, on the other hand, say balls sit high on the sand, making it easier to make a good shot.

"We sell out every year," Hayden said. "As soon as the sand hits the ground, it's sold."

Workers use excavators to mine the quartz, which is located anywhere from 2 feet to 20 feet underground on the company's 800 acres. The Sheridan area has a high water table, so it takes pumps to keep water out of the mining area long enough to remove the quartz. Once mined, the quartz must be dried so it doesn't stain the color of its reddish outer layer. Lignite, a low-grade coal, lies beneath the rock and also must be removed from the mined material.

"It's very difficult to mine," Hayden said. "Not only do we fight off-color material, we fight water and the lignite that lies underneath it."

The rock goes through several washes and screens. Larger rocks become landscaping stones, which are sold to a company that packages them for sale at Wal-Mart, Lowe's and Home Depot, while medium-size pieces are crushed into sand.

Sand alone isn't Arkansas Decorative Stone's biggest product. It sells much of its quartz to a Scottsdale, Ariz., company called Pebble Technology International, which buys stone for swimming pool finishes. But the pool industry is heavily tied to the housing market. Hayden saw sales slump when home prices plummeted in 2008, though the market is slowly coming back.

"We had to do something a little bit different," Hayden said of manufacturing during the recession. "We just had to weather the storm, really."

The sand was introduced in 2001 but took on the Premier White brand name in 2008. Word-of-mouth recommendations drive sales. Hayden said the company can't keep up with the demand and is upgrading its plant to increase output.

Arkansas Decorative Stone works with Turf Materials Inc., a distributor based near Dallas, to market and sell the sand in Texas, Louisiana, Oklahoma and New Mexico. The sand is particularly popular with courses in the Dallas and Fort Worth area.

Turf Materials Inc. President Tony Campagna first saw the white quartz when delivering a different sand to a Dallas golf course in 2006. Struck by the bright color, he immediately knew he wanted to market the product. His company is now Premier White's exclusive distributor.

"The bright, white color is just a spectacular contrast on the green grass," Campagna said. "We refined the crushing process and made it into one the best bunker sands on the market."

Campagna said most golf courses that use Premier White don't need to replenish their sand too often, as the sand stays put on windy days and doesn't pack down when it rains. The golf courses on the PGA Tour usually order a couple of loads of sand before their tournaments to keep bunkers neat.

Brandon Wright, the golf course superintendent at the Country Club of Little Rock, has been with the club for a decade and started using Premier White to fill bunkers after the club renovated its course's greens, tees and bunkers in 2010.

The club had previously been working with other sand companies but had trouble finding a nearby supplier that met the United States Golf Association's sand quality specifications.

"Having such a quality sand locally is a really big luxury," Wright said. "They're highly sought in the industry."

Arkansas Decorative Stone trucks sand to golf courses and also loads it on rail cars to send to distant locations. Hayden said delivery often costs more than the sand itself.

Wright said his maintenance crew rakes the sand daily but the course's combination of new bunkers and higher-quality sand makes upkeep easy. He said his golfers, particularly the ones with lower handicaps, have also called the new sand an improvement.

"It's a night and day difference in terms of quality," Wright said.

The company also produces a natural sand which is mostly used for beaches and construction. It's not pure white or golf course grade, but it's in the concrete beams that hold up the Clinton Presidential Center.

To keep up with demand for Arkansas Decorative Stone's products, Hayden will have a second crushing operation by mid-July. Sand production goes year round, and the business employees 15. Hayden says that even after years in the business, the company remains small and tight-knit. His father Darrell Hayden first purchased the land to mine in 1989 and remains the company's president and CEO. The company's land is adjacent to the Hayden family farm.

Wright and Campagna have both made trips to Sheridan to see the production, and say they value the company's family roots.

"It's been a really good fit," Campagna said. "We're happy to have such a unique material."