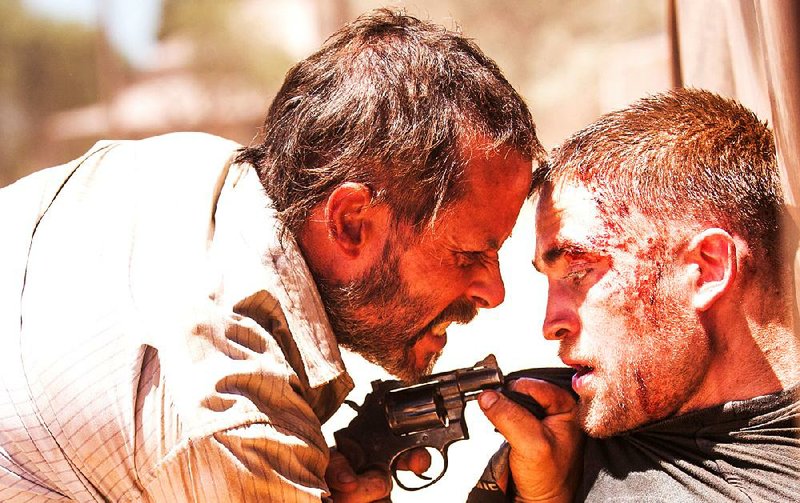 Eric (Guy Pearce) convinces a gut-shot Rey (Robert Pattinson) to help him in his quest to retrieve his stolen car in the dystopian thriller The Rover.

More a futuristic take on Western mythology than a true dystopian nightmare, David Michod's The Rover is set in the Australian Outback "10 years after the collapse" and presumably at least a few years before the emergence of (Mad) Max Rockatansky as the Main Force Patrol's top pursuit officer. A provisional layer of civilization remains -- there are things to be bought and sold, though most merchants generally refuse worthless Australian currency in favor of the slightly more stable U.S. dollar. 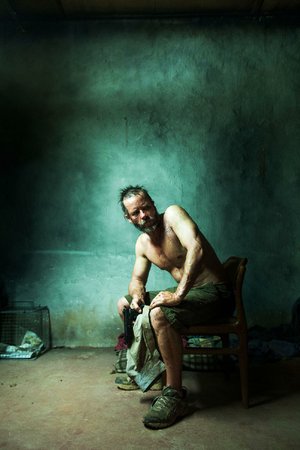 Eric (Guy Pearce) is an embittered and unstoppable denizen of the blasted Australian Outback who wants his stolen car back at any cost.

It's bleak -- but not unimaginably bleak. Anyone who lived through the past 40 years, with its cycles of economic crashes and fuel crises, might see this as a plausible horror scenario. There's not enough law to go around in the wide, featureless sun-bleached precincts where a guy like Eric (Guy Pearce)

lives, but the population density is such that it's usually easy enough to avoid the other scavengers. Eric has shelter, and a couple of quiet roommates. He also has a car.

And when the film starts, he's sitting in that car, in the heat, oblivious to the flies that flit about and even light on his face. It's a hard face, lean and somehow pulled back, as though the handsome actor had somehow managed to rearrange his angles. His forehead slopes; facial hair gives him a rough and weather-beaten aspect. Pearce is able to suggest much in the first, silent scene of The Rover: Before a word of dialogue has been spoken, we understand that this character is an afterimage -- a kind of ghost. Whatever kind of life he had before was different from this one.

Bad people soon come tumbling into his life: A trio of violent if inept robbers racing away from the scene of a bungled robbery -- where they left one of their number, Rey (Robert Pattinson), the feeble-minded kid brother of one of the gunmen, dying in the dust -- roll their truck on the dirt road in front of Eric's home. In a panic, they leap out of the upright but stuck truck and take off in Eric's battered 2006 Holden Commodore as he watches dumbfounded. He then jumps into the robbers' truck, rocks it free and takes off in pursuit.

Again, we sense there's something more at work here than Eric just being possessive. First of all, the truck for the car seems at least a fair trade. And Eric is unarmed, going after three obviously desperate, deadly guys. But he's not deterred by their weapons, and when they finally stop to confront the road rager, Eric attacks them with his bare hands. Why they only knock him unconscious (and why they leave him with the truck) is one of those logical questions best glided over by critics -- the point is they did, and so our movie can really get underway.

When Eric wakes up, he immediately begins to track them, which leads him to a little outpost where we learn exactly how serious and ruthless Eric can be. And it's there that Rey stumbles up, gut-shot and addled and wondering how this stranger got hold of his brother's truck. Eric realizes he needs Rey to track down the car thieves, so he takes him to nearby Dr. Peeples (Susan Prior) to be patched up. There we find out that more trouble is pursuing Eric, and that Eric is possessed of some very specific skills.

After a couple of bonding instances of violence, Eric and Rey come to an understanding. (After all, Rey's brother and his pals did leave Rey behind.) And so we're posed for a bloody denouement. And after that, a wry revelation that's as satisfying as it is surreal.

But that's not really what's important. What's important is how deftly Michod -- whose Animal Kingdom was a similarly accomplished take on the crime family genre -- balances black humor with tiny, near-tender moments that alert us to the residual humanity of these burnt-out souls. Things have happened to Eric and Rey, and they've been changed by those things. They're still changing, albeit only a little bit.

Despite its epic setting, The Rover is an intimate movie that's as much about the shift in the Eric/Rey dynamic as it is Eric's Terminator-esque drive for revenge. (The ultimate violence is really Rey's call -- we get the feeling Eric would have been satisfied stealing his car back.) It's a movie about men without women (or much of anything else), and there's a telling scene where Rey justifies a convoluted story by acknowledging that "not everything has to mean something."

While I'm still not sold on Pattinson as a forceful actor, he's very good here as the jumpy, dimwitted American Southerner Rey. Pearce has played this sort of taciturn menace before, and most of this nihilistic film's considerable allure derives from the Of Mice and Men-style exchanges between the two. By the end of the film, we're not sure that Eric actually feels anything for Rey -- but we know he still feels something.