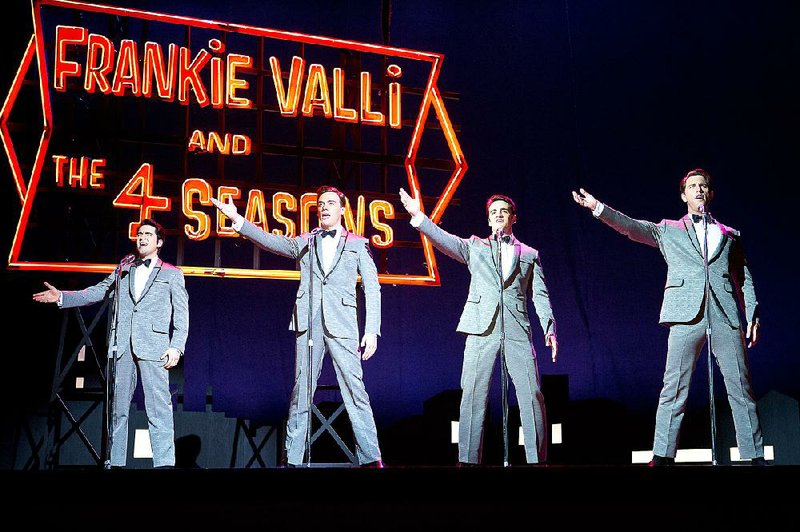 Rating: R, for language throughout

Clint Eastwood’s new film of the Broadway musical Jersey Boys delivers enough moments of wit and candor to nearly escape this sort of reductive criticism. It helps that the actual story of how the Four Seasons rose, young men trying to stay a step ahead of the law, to formidable hit makers is compelling and that it has a few turns that aren’t the stuff of rocker bio-pics.

The founder of the ensemble was a now mostly forgotten guitarist named Tommy DeVito (Vincent Piazza). DeVito, like every other young man of limited means in the Garden State during the 1950s, dreamed of getting out. Because the only sure ways of getting ahead at the time were through the Army or the mob, it’s easy to understand why Tommy, a capable if not exceptional ax man, would want an option that wouldn’t put him in a body bag.

When he and his pals aren’t committing petty crimes to get by, they’re trying different combinations of musicians to create a sound that could make them rich. After several false starts, he finds what he needs is a small man with a huge voice named Francesco Castelluccio (John Lloyd Young). Later known as Frankie Valli, he was effortlessly able to reach high notes that no one else with Y chromosomes could hit. In addition, he still maintained the same level of volume in that range and even managed to make some of that register sound oddly macho as well as sensitive.

Director Eastwood and screenwriters Marshall Brickman (Annie Hall, Manhattan) and Rick Elice, who also happen to be the authors of the stage play, seem a little too constrained by the Behind the Music format. We learn what any regular listener to a Pink Floyd album already knows. Uh, fame sucks. It also might have helped if somebody like Martin Scorsese, who has a feel for the milieu, were behind the camera. The Jersey in Jersey Boys sometimes feels a little too much like a back lot.

Nonetheless, Eastwood does make several prudent decisions. Several of the cast come from the Broadway production, so they’re guaranteed to nail the roles. Young, in particular, wails Valli’s tunes and does the original vocalist proud. This is especially impressive because Eastwood had several vocal parts recorded on set.

Brickman and Elice’s script is loaded with juicy lines. One choice sequence is when prison guards greet perennial troublemaker DeVito as if he were a regular customer at a restaurant instead of a correctional facility.

The two also tweak the chronology and have the individual members of the group tell their own versions of the Four Seasons story directly to the camera. One almost wishes that Brickman and Elice had gone farther with this Rashomon approach because it would have given the story more credibility. Each of the guys in the band had different perspectives on their careers, and it would have been fun to imagine how each viewed the inevitable collapse.

There are some intriguing wrinkles in the Four Seasons story that keep it from fitting Leary’s caustic description. For example, Valli’s unique gifts behind a microphone moved a hardened made man (Christopher Walken) to tears and even led the veteran wise guy to protect Valli and company from other criminals. It might have also benefited the film if Valli’s awkward relationship with his daughter (Freya Tingley) could have been explored more fully. These scenes give the film a little more emotional weight than a musical revue usually has.

Nonetheless, it’s great to hear the Four Seasons’ uniquely ragged but not dissonant harmonies on a big-screen sound system. Still, one wishes that a production of Jersey Boys had some of the bile of Leary’s tirades.