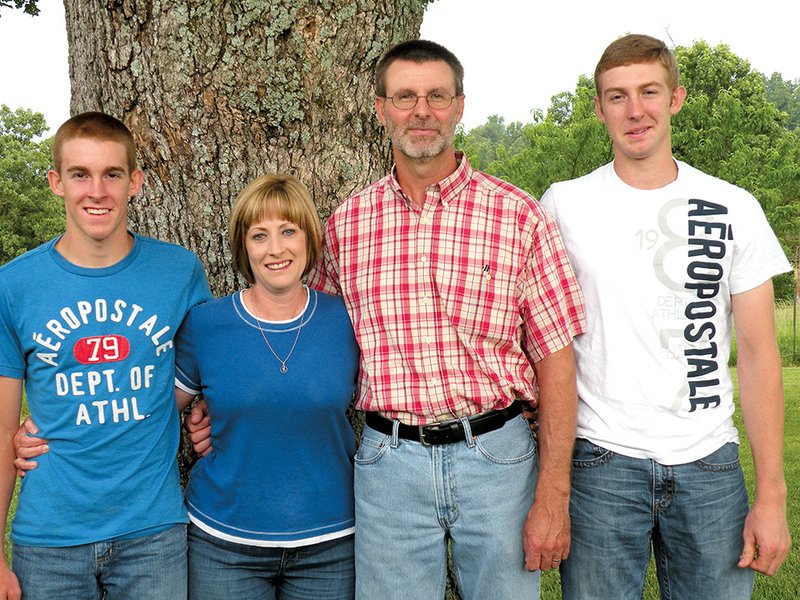 The Wade Powell family of the Fryatt community is the 2014 Fulton County Farm Family of the Year. Family members include, from left, Coltin, Sherry, Wade and Collin. The family raises hay and timber and has a cow/calf operation on 739 acres.

FRYATT — The Wade Powell family of the Fryatt community has been named the 2014 Fulton County Farm Family of the Year.

“It is an honor to be Farm Family of the Year,” said Wade, who grew up on a farm. “I’m a fairly private person, more of a behind-the-scenes person, and I’m a little reluctant to share the details of our farm. But for these two (Collin and Coltin) to see people recognizing us, it is a motivation for them to go into farming. It’s good for them to see this recognition.”

Wade said he hopes other small farmers will see this recognition as a motivation as well, a motivation to carry on the farming tradition to help feed the people of the world.

Sherry, who is a first-grade teacher, said she talks with her students about farming and agriculture.

“These kids need to know where their food comes from,” Sherry said.

Wade, the son of Arlus and Patricia Powell, grew up on a farm, where his father raised cattle and hogs.

“I grew up farming,” said Wade, who has been farming for 26 years. “I had my own sows. Those 10 sows paid my way through college and beyond.

“If I got up in the morning and didn’t have something to do on the farm, I don’t know what I’d do.”

Wade said the most rewarding part of farming for him is just being with the cattle.

“I like seeing the baby calves that have just been born,” he said, smiling.

He said there are always other things that need to be done on the farm that are not as rewarding.

“Putting up fences, … picking up rocks. Doing those things are not fun,” he said. “They’re just work. But working with the cattle, seeing them grow, that’s the most enjoyable part of farming.”

Wade said the family plans to increase its cow herd, primarily by keeping heifers from the farm. He said he plans to better utilize cross-fencing to improve pasture efficiency with rotational grazing.

The family markets its cattle though local livestock auctions and also sells hay to individuals when there is a surplus, and the Powells market the timber that is harvested by using local loggers.

Wade and Sherry, who were married on July 10, 1993, have full-time jobs off the farm. He is principal of Mammoth Spring Elementary School, and she teaches first grade at the school.

Wade is a graduate of Mammoth Spring High School and Arkansas State University, where he earned a bachelor’s degree in elementary education and a master’s degree in school administration.

Sherry graduated from high school in Thayer, Missouri. She has a bachelor’s degree in early-childhood education and a master’s degree in gifted-and-talented education from ASU.

“I have to do something on the farm every day of the week before I leave for school,” Wade told visitors to their farm on June 5. “We spend our vacation on the farm.

Wade said fencing “is a work in progress.

“Fencing is the biggest challenge. We have been able to replace one-half mile of older fence each year.”

He said another big challenge is brush and weed control.

Sherry, the daughter of Sharon Todd of Springfield, Missouri, and Jody and Ronnie Todd of Salem, said she did not grow up on a farm.

“I married into it,” she said with a smile.

She does help on the farm as much as she can.

The couple’s sons, Collin and Coltin, also help out on the farm.

“They help me work on the corrals and with the fencing,” Wade said. “They’ve made it much better for me when working the cattle.”

Collin and Coltin attend Mammoth Spring High School. Collin is a senior, and Coltin is in the 10th grade. They are both members of the Beta Club and FFA, which Collin serves as president. Each is on the school’s basketball and baseball teams.

Coltin runs track and cross country and participates in school plays. He is playing his final year in the Mammoth Spring Little League baseball program.

Both have been involved in the Mammoth Spring High School Shooting Sports team.

Collin and Coltin plan to show heifers at this year’s Fulton County Fair.

The Powells are members of the Pilot Church of Christ. Wade is also a member of the Fulton County Hospital board of directors.