It's been 20 years since service companies were first listed on the Fortune 500, and over those two decades, Arkansas companies have distinguished themselves with rapid revenue growth and job creation. 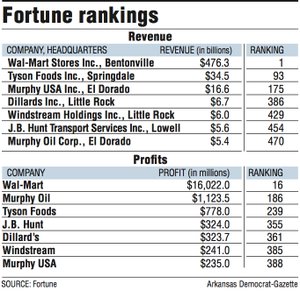 Fortune magazine places Arkansas in a grouping dubbed "the hot nine" in its June edition, which features its famous 500 list.

Arkansas makes the cool-kids clique on the strengths of megaretailer Wal-Mart Stores Inc., ranked No. 1 in revenue in seven of the past 10 years, along with the help of other stalwarts like Tyson Foods Inc., Dillard's Inc. and Murphy Oil Corp. and with a push from newcomers to the list -- Windstream Holdings, J.B. Hunt Transport Services and recently spun-off Murphy USA Inc.

Marc Anthony Fusaro, associate professor of economics at Arkansas Tech University's College of Business in Russellville, said the state's place on the Fortune 500 over the 20 years is a story that heavily features Bentonville-based Wal-Mart. With $476.3 billion in revenue, it dwarfs its competitors in the retail segment like Target, and also easily bests specialist companies like warehouse club Costco and grocer Kroger.

Being prominent on the world stage is what sets Wal-Mart apart from its competitors, he said. The retailer's ability to grow and learn from its missteps overseas have been keys to its continued success.

But it's not just a Wal-Mart story, he said. All of the companies on this year's list have succeeded in their particular sectors over the years or recently added their muscle to the mix, attracting the eye of the Fortune analysts.

"Every company on the list contributes in a significant way," Fusaro said.

The Fortune 500 began in 1955 and for its first 20 years was dominated by industrial companies. The service sector was added in 1995. Revenue from service companies initially accounted for 50.4 percent of revenue on the list. Now it totals 60.5 percent.

Michael Pakko, chief economist at the Institute for Economic Advancement at the University of Arkansas at Little Rock, said the list and its changes reflect the nation's shift toward the service sector.

Companies are ranked by total revenue for their fiscal years. Once on the list, the companies are classified by many other factors like profit, number of employees and market capitalization and also are subdivided by sector. The methodology allows for a mix of both publicly held and private companies.

In the 2013 list, total revenue was a record-setting $12.21 trillion. Total profits for the 2013 list stood at $1.08 trillion, the first time profits have gone over the $1 trillion mark, smashing the previous record of $824.5 billion in 2011. But the profits are coming without jobs, the magazine found. It noted that profits for the top 500 companies grew nearly 32 percent compared with 2012 but added only about 180,000 jobs.

Fortune noted that over the past 20 years, the combined market capitalization, or the total value of a company's issued shares, of the nine "hot" states has increased an average of 12 percent annually. The hot nine make up 44 percent of the Fortune 500's total revenue, up from 26 percent in 1995, and added 5.5 million jobs, making up 40 percent of the list's employment, an increase from 26 percent in 1995.

"We punch above our weight," Pakko said, noting Arkansas' seven companies on the list made up just 1.4 percent of the Fortune 500 and with 3 million residents, the state makes up about 1 percent of the nation's total population.

Scott Hardin, a spokesman for the Arkansas Economic Development Commission, said in an email that seven Fortune 500 companies in a state the size of Arkansas is a key recruiting tool.

The commission's new marketing campaign, ArkansasFavorsTheBold, highlights the fact Arkansas entrepreneurs built companies and brands known around the world, Hardin said. The story of Sam Walton, the founder of Wal-Mart, is used often as an example of being "Arkansas Bold."

Arkansas growth has been faster than any other on the Fortune 500 over the past two decades, according to the magazine. Revenue from the state's companies on the list was $450 billion, an annual gain of 9.4 percent. The Arkansas companies on the list added 1.6 million jobs over the period, 76 percent more than No. 2 California, much of that job growth attributed to Wal-Mart both inside and outside the state.

Over the past year, Wal-Mart has struggled with sales in stores open at least a year in the U.S., a key retail metric. The company said winter weather and economic pressure on some of its core customer segments have hurt sales.

In an update to investors in early June, Charles Holley, Wal-Mart chief financial officer, said the company has a strong financial foundation and it will invest in acquisitions where it sees opportunity. Chief Executive Doug McMillon said the company wants to drive more sales and is focused on improving the basics and being a better merchant to its customers.

Tyson Foods has moved steadily up the list and now sits at No. 93, with $34.5 billion in revenue. In ranking fellow food production companies, Springdale-based Tyson Foods comes in at No. 2, behind Archer Daniels Midland and ahead of Smithfield Foods.

Tyson Foods also was featured on the list of fastest-growing companies based on profits between 2008 and 2013, ranking No. 4 with 54.6 percent annual growth in earnings per share. Tyson recently announced it plans to buy Hillshire Brands in an $8.55 billion deal, which -- when finalized -- will make it the largest seller of prepared meats.

Arkansas Tech's Fusaro said he couldn't speculate as to what the acquisition would mean for Tyson Foods' ranking but predicted it should significantly increase both its revenue and profit. Hillshire generated about $4 billion in revenue in its 2013 fiscal year.

Murphy USA, a specialty retailer spun out of Murphy Oil, debuted on the list this year at No. 175 with $16.6 billion in revenue. The El Dorado-based company ranks No. 6 on the list of 24 other specialty retail companies. The new outfit also found its way onto the listing of most bang for the buck. Murphy USA ranked No. 3 on that list based on revenue per dollar of assets at $8.80 and ranked No. 13 on another list based on revenue per dollar of equity at $25.20.

Fusaro said the Murphy USA spinoff seems to have been a success, but it will bear watching. He noted the company is unique on the list as a retailer focused on gasoline, noting it's lumped in with companies like Best Buy and Costco because it's hard to classify.

"It's something nobody has done so far," he said.

Murphy Oil, which now focuses on oil exploration, ranks No. 470 on the Fortune 500 list with revenue of $5.4 billion. On last year's list, before the split, Murphy Oil ranked -- including its retail operations -- No. 104. Murphy Oil also is based in El Dorado.

Clothing retailer Dillard's ranked No. 386 with revenue of $6.7 billion. It ranked No. 378 on the 2012 list. Dillard's came in last on the list of 10 general merchandisers, behind Family Dollar Store.

The Little Rock company ranked No. 4 on the fastest-growing-companies list, showing 51.7 percent annual growth in earnings per share over the past 10 years and ranked No. 3 on the list for total return for shareholders for the past five years with a 93.2 annual percentage rate gain.

In a May statement, Dillard's CEO William Dillard II said the company's balance sheet had improved over the past five years, noting Dillard's returned more than $1.7 billion to shareholders in dividends and share repurchases during the period. He said Dillard's expects to continue to return excess cash to shareholders.

"We are proud to be one of Arkansas' homegrown Fortune 500 companies and we are particularly pleased to rank No. 3 in five-year return to shareholders," said Julie Bull, Dillard's spokesman. "The Fortune 500 rankings are a highly regarded measure of success and it is rewarding to place highly among some great companies."

Telecommunications company Windstream ranked No. 429 on the 2013 list, shifting slightly after debuting last year at No. 414. The Little Rock company has doubled in size since it was formed in 2006.

Its revenue increased by 2 percent in 2013 and it returned $600 million to shareholders in a dividend. The company ranked No. 11 out of 12 telecommunications companies based on revenue, but if the list was sorted by total profits, it was ranked No. 8 with $241 million.

"We are executing on our key priorities this year to improve our competitiveness, enhance the customer experience and drive sales, which should improve our revenue trends going forward and hopefully advance our position in future rankings," Dave Avery, Windstream's vice president, corporate affairs, said in a statement.

Lowell-based transportation company J.B. Hunt, shouldered its way onto the list last year at No. 486 and moved up in the general rankings on the 2014 list to 454. The company had revenue of $5.6 billion, an increase of more than 10 percent. J.B. Hunt is categorized as a trucking/truck leasing company and came in behind Ryder Systems, the only other trucking company on the list, based on revenue but bested it when ranked on total profits, which were $342 million.

Michael Hargis, dean of the College of Business at the University of Central Arkansas in Conway, said Arkansas' history on the Fortune 500 for the past 20 years is one of solid, mostly home-grown companies that have continued to grow and thrive. He noted Wal-Mart is a mammoth presence but the other companies on the list add depth, spanning multiple sectors, including oil and gas, telecommunications, food, as well as transportation and logistics.

The power and clout that Fortune 500 companies bring to Arkansas gives the state an advantage, helping to recruit and keep talented workers, draw and create new businesses, and spur existing companies, he said.

"We have had a solid presences in the business world for a long time," Hargis said.