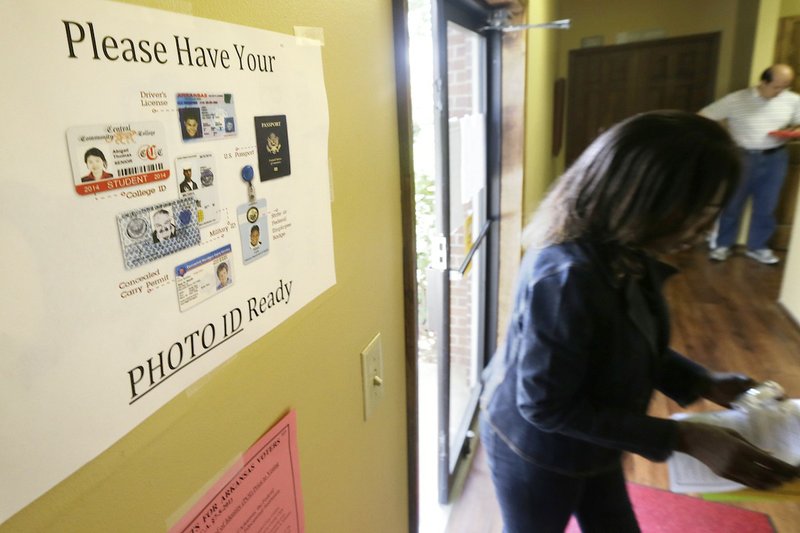 In this photo taken Tuesday, May 20, 2014, an election worker walks past a voter ID sign at a Little Rock, Ark., polling place. The American Civil Liberties Union of Arkansas asked a Pulaski circuit judge on Tuesday, June 24, 2014, to lift the stay on his ruling last month that it was unconstitutional to require voters to show photo identification before casting a ballot.

LITTLE ROCK — A civil liberties group asked an Arkansas judge Tuesday to block the state from enforcing its voter-ID law, saying more than 1,000 people were disenfranchised during last month's primary election because of the requirement that they show photo identification before casting a ballot.

Pulaski County Circuit Judge Tim Fox ruled last month that the voter-ID requirement was unconstitutional but suspended his ruling, allowing the requirement to stay in place during the May 20 primary and June 10 runoff election. The primary was the first statewide test of the law, which took effect in January.

The American Civil Liberties Union of Arkansas on Tuesday asked Fox to lift his stay, saying 933 absentee ballots and 131 ballots cast in person during the primary were thrown out because of the new law.

The ACLU of Arkansas and the Arkansas Public Law Center sued the state on behalf of four voters they said would be harmed by the law.

The law allows voters who don't show ID at the polls to cast a provisional ballot that won't be counted unless they show ID to election officials by noon on the Monday after the election. No such "cure period" is allowed for absentee voters, who must include a copy of their ID with their ballots.

Fox ruled in May that requiring voters to show photo identification before casting a ballot violated the Arkansas Constitution by creating a new qualification to vote. He also said lawmakers did not properly approve the measure, citing a constitutional amendment that requires a two-thirds vote in the Legislature to change the voter registration process.

Attorney General Dustin McDaniel and Secretary of State Mark Martin have appealed Fox's ruling. Both said through their offices that they were reviewing the ACLU's filing.

Fox had found the law unconstitutional in April in a separate case that focused on absentee ballots. The state Supreme Court tossed out that decision, saying the judge didn't have the authority to address the law's constitutionality in that case.

Thirty-one states have laws in effect requiring voters to show some form of identification, according to the National Conference of State Legislatures. Seven states have strict photo ID requirements similar to Arkansas.

Under previous Arkansas law, election workers were required to ask for photo ID but voters don't have to show it to cast a ballot.