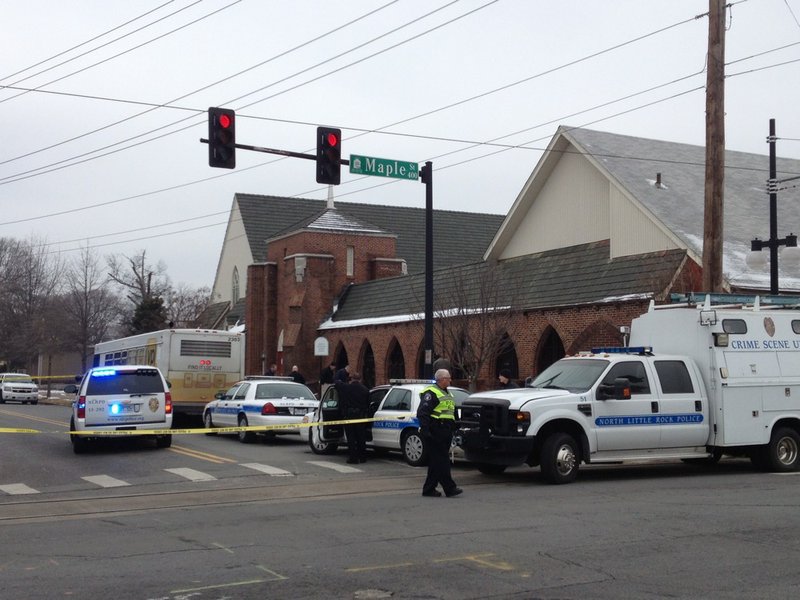 Crime scene tape blocks off Fourth Street between Maple and Orange in downtown North Little Rock on Wednesday, March 5, 2014. A city bus is within the crime scene.

A man who had been causing a disturbance on a Central Arkansas Transit bus was fatally shot Wednesday afternoon on a downtown North Little Rock sidewalk after he attacked a police officer with a cane, authorities said.

North Little Rock Police Sgt. Brian Dedrick said an officer responded about 12:15 p.m. at Fourth and Maple streets after a reported disturbance on the vehicle. Police say the officer got the man off the bus, but the man proceeded to attack the officer with a cane in front of First Presbyterian Church, which sits on the northwest corner of the intersection.

It appeared the cane the man had been wielding — a wooden cane with a gold knob at the end — ended up on the sidewalk between the bus and the church. A police evidence marker was placed beside it.

Dedrick said the officer, whose name was not released, opened fire, hitting the man at least once.

The man, who also has not been identified, was taken to UAMS Medical Center in Little Rock where he later died.

The officer was taken to Baptist Health Medical Center for treatment of unspecified injuries described as non-life-threatening. The officer has been placed on administrative leave pending the outcome of the investigation — a standard policy for officer-involved shootings.

Dedrick said it wasn't clear what started the disturbance, which he said was described as a verbal and physical altercation in which a person was "trying to assault people on the bus."

He said there were a number of passengers on the bus, and all were taken to the police department for questioning.

"This will take quite some time," Dedrick said. "We'll be interviewing at least 20 to 25 individuals that were on the bus at the point in time when the CAT driver called it in."

Dedrick said the man who was shot was an "older gentleman" and the officer was a veteran lawman whose been on the force about 17 years. 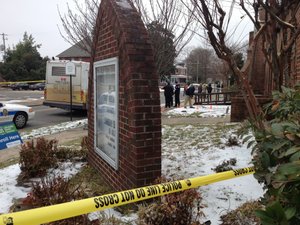 Photo by Gavin Lesnick
Crime scene tape blocks off Fourth Street between Maple and Orange in downtown North Little Rock on Wednesday, March 5, 2014. A city bus is within the crime scene.
ADVERTISEMENT