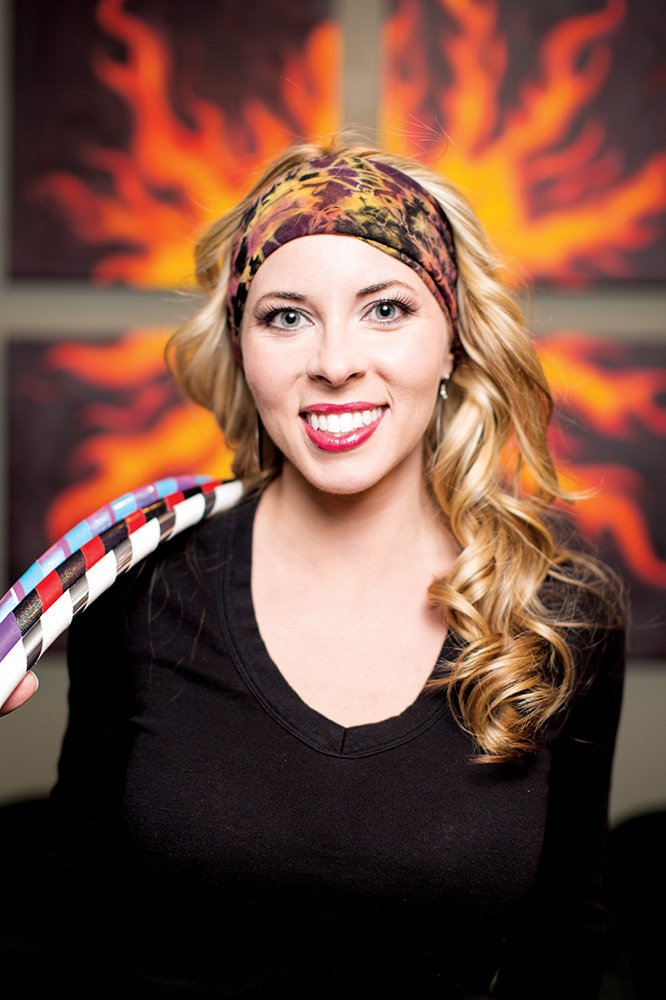 Katie Wilson, 28, of Conway holds some of the hula hoops she uses when she performs at events and at home. Wilson’s talent caught the eye of a producer, and she is part of a country-music video with singer Jerrod Niemann. Wilson teaches art to kindergartners through fifth-graders at Academics Plus Charter School in Maumelle.

Wilson, 28, who teaches in Maumelle and lives in Conway, was fascinated by something she saw a few years ago at a music festival.

It had nothing to do with what was happening on stage.

“I saw another girl hula hooping. … She was the first girl I’d ever seen do that. I was totally mesmerized by her,” Wilson said. “I wasn’t even watching what was going on onstage. I said, ‘I have to be that girl. I have to learn how to do that.’”

She not only learned; she made it a second career.

Her skills are so impressive that country-music singer Jerrod Niemann featured Wilson in his latest music video, released in February.

“I’m in the video a lot more than I expected to be,” she said.

Wilson, aka Katie Sunshine, picked up a hoop about five years ago.

“It was baby steps. It took a lot of practice,” Wilson said.

First, she had to buy a hula hoop. Most adults don’t have one hanging in the garage.

“I hadn’t hula hooped since I was a kid, and I couldn’t even keep it around my waist anymore,” she said.

Now, she can keep as many as seven hoops rotating around her waist, and she uses her wrists, knees, ankles, neck and rolls the hula

hoop across her back, chest and shoulders. “I can spin up to three hoops on different body parts at once,” she said.

Wilson said she watched some how-to videos on YouTube to learn the skill.

About 1 1/2 years later, in 2010, she created her own video, hooping to a song by Goldfish to show her friends and family her new skills.

“I had a few tricks down I was proud of,” she said.

That’s when her hula-hooping career went spinning into orbit.

The video went viral in Denmark, getting hundreds of thousands of views.

“That was crazy,” she said. “That’s when I started getting fan messages and people contacting me for events. It’s just surreal, absolutely surreal.

“Another [video] got a million views in a week — one week. Is that not insane?”

Now that Wilson has appeared in Niemann’s music video, her popularity is likely to grow.

The video’s song is called “Drink to That All Night.”

Wilson said that at first, she was skeptical when a man contacted her about performing in Niemann’s video.

“I thought, ‘Is he directing a garage-band video?’ The name didn’t ring a bell immediately. After I Googled him, I recognized his other songs,” she said.

After back-and-forth emails, she was flown to Nashville, Tenn., to make the video.

The video starts with the singer and two band members asking the bartender for something “different” and getting glasses of milk, which skews what they see.

Katie is hula hooping in slow motion in several scenes of the video.

“I started all slow and sexy, but they said, ‘No, [we] want to make it slow motion, so you have to go fast.’ I was hooping like crazy,” she said. “[During] breaks, I could hardly catch my breath.”

“Believe it or not, I already owned all that stuff,” she said, laughing.

“It was amazing. It was just an unforgettable experience,” she said. “Everybody has been really, really happy with it. I couldn’t be happier.”

Making the video also helped her score points with her 15-year-old stepson because he is a fan of Niemann’s, she said. She told the producer that, and Niemann gave her a signed guitar, poster and CD for her stepson.

Wilson, whose performance name is Katie Sunshine, is an elementary art teacher at Academics Plus Charter School in Maumelle. Her husband, Chad, is a Conway police officer (and yes, she said, he can hula hoop).

A fan named her Katie Sunshine because she only posts her first name online for safety.

“He said, ‘I don’t know your last name, but you’re a little ray of sunshine, so I’m going to call you Katie Sunshine.’

“I was flattered that he called me that to begin with,” Wilson said. “I feel like it’s fitting. I’m a pretty happy, positive person, so I feel like it fits.”

Another hula hooper told Wilson, “‘You need a hula-hoop name, a performance name — we all have one,’” so she picked Katie Sunshine.

Wilson said she sometimes performs hula-hoop tricks for her students. It’s great exercise, she said, and, more importantly, it allows her to be creative.

“I’ve always loved art, and I started off as an interior-design major at the U of A. I hated it because it was all computerized, and I’m a creator, so I switched my major to art,” said Wilson, a Fayetteville native. “I didn’t know what I was going to do, but I knew I had to do what I loved.

“Both of my parents are so supportive; I’m very lucky. I’ve been an artist my whole life, and they’ve always supported me.”

When she graduated, Wilson reluctantly decided to find a job teaching art and was certified through the nontraditional licensure program.

She said that to her surprise, she “loved it.”

Academics Plus Elementary School Principal Diane Gross said she wasn’t aware of Wilson’s hula-hooping talent, but she is impressed with Wilson’s artwork and teaching.

“She is incredible herself, and the kids have been producing wonderful art,” Gross said. “They’ve really done some remarkable art.”

When she’s not teaching art or painting for herself, Wilson is practicing or performing with her hoops.

“Last year in Little Rock, they had Shorts-N-Suds, a fundraiser for Special Olympics, where you come out in boxer shorts. I came out, and I hula hooped in my boxer shorts,” she said.

She was flown to Philadelphia and danced on top of the baseball dugout with Phillie Phanatic, the major league team’s furry, green mascot.

“I didn’t know until I got into hula hooping, there’s a whole world out there,” she said. “It’s like a lifestyle for people — like people who are into yoga, or coffee, or running.”

After spending a small fortune on hula hoops, Wilson said, she started making her own.

“I bought tubing at the hardware store and decorated it with ribbon or duct tape,” she said.

Wilson said she has about 15 hula hoops at any time in her garage, but she gives them away to encourage her friends to try hula hooping.

She’s posted several other videos since her first foray into hula hooping, including one where she pours paint into the hoop, does her thing and lets the paint sling onto a canvas to create unique art.

Wilson also is a finalist in a poster-design contest for the Wakarusa Music Festival that will take place this summer in Ozark.

Although she praised the other works of art as “amazing,” she said “I’m proud of myself for being the only hand-to-paper artist of the bunch. It’s a watercolor painting with pen accents on top.”

Anyone who wants to vote in the contest can do so through March 28 by going to www.wakarusa.com and clicking on “Activities.”