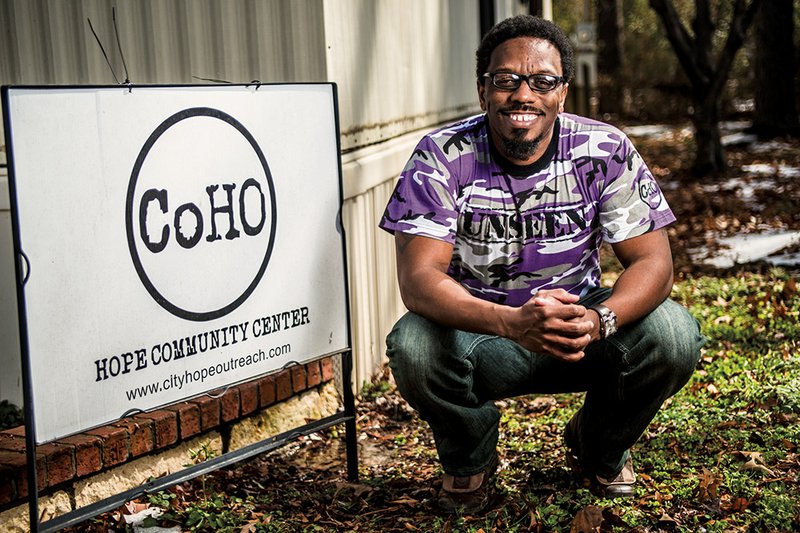 City of Hope Outreach founder Phillip Fletcher of Conway said the Unseen Campaign, launched March 1, is about creating awareness that homeless people exist and exploring why they are homeless, as well as raising funds for Hope Shelter. The shelter is in Oakwood Village, a mobile-home park in Conway, and is primarily used by homeless men, Fletcher said. Unseen T-shirts are for sale on the campaign website, www.conwaysunseen.weebly.com.

Phillip Fletcher of Conway said his outreach organization is focusing on homeless individuals this month to make “the unseen visible.”

“Even though you may not see a homeless individual, it doesn’t mean they’re not there,” Fletcher said.

Fletcher, founder of City of Hope Outreach, said the Unseen Campaign was launched March 1 to focus on homelessness and raise money for Hope Shelter in the Oakwood Village mobile-home park.

“For our organization, advocacy is a big thing — one of the advocacies is

poverty — looking at poverty as a big umbrella, underneath that you’ve got food insecurity and homelessness,” Fletcher said.

“Specifically with homelessness, what is our part in creating and increasing awareness about the men and women in our city and in our county who are homeless, but they go unseen?”

The Unseen Campaign kicked off with a panel discussion with homeless and formerly homeless people, held at The Locals, 1024 Van Ronkle St. in downtown Conway.

shelter and a guy who has come out of a homeless shelter, to hear what it’s like emotionally and physically, that’s better than reading any type of paper or research. It was moving,” Fletcher said.

Purple ribbons were distributed that day for businesses to display.

The campaign will culminate with Embrace the Unseen: A Celebration at 7 p.m. March 21 at The Locals.

A scavenger hunt will be held Monday through March 20, and people can sign up online at www.conwaysunseen.weebly.com. The prize will be awarded at the March 21 event.

“Who are the unseen? Obviously, it’s men, women and children,” Fletcher said. “It’s made up of people who had jobs and who were doing well but through circumstances, they hit hard times. It’s individuals who have been released from incarceration. It’s individuals who have mental illness. They’re people. They’re not just a stereotypical, ‘Oh, they’re lazy; they’re drug addicts.’ No it’s people who have had good jobs, but they hit rock bottom.”

He said there are homeless in Faulkner County, but they live in wooded areas, are sleeping in cars or staying temporarily with other people, often called “couch surfing.”

Fletcher founded City of Hope Outreach, referred to as CoHO, a mobile-home park mission in Oakwood Village in 2007 in Conway and later in Brookside Mobile Village. The ministry includes tutoring and educational opportunities for schoolchildren, English as a Second Language classes for parents, summer programs and more.

A trailer at Oakwood Village was used as a community center, but a larger facility was built. The trailer then was utilized by people mainly to wash clothes, Fletcher said.

“We would get calls from people looking at a place to stay. We said, ‘Let’s get a couple of beds and put them in the community center,’” he said, referring to the trailer.

That was three years ago, and he said about 20 people, mostly men, have stayed in the shelter.

He said often it’s men who have lost their jobs; therefore, they’ve lost a place to stay, or they have been released from incarceration.

“Some stay a couple of nights, others a little longer term until they financially have the means to get back on their feet again,” Fletcher said. “We try to be flexible with the individuals that come [to the shelter].

“We’ve got a format we go through: who they are, how they got in the situation, what resources they have. An individual may have food stamps, may have some sort of assistance, but it hasn’t started yet,” he said.

Fletcher said that only once in three years has someone who came to the shelter been a sexual offender, so he was denied.

Fletcher said he and his staff work closely with Judi Lively, executive director of Bethlehem House in Conway, a transitional homeless shelter.

He said Hope Shelter will house someone if there isn’t room at Bethlehem House, or let him stay at Hope until he can interview to get into Bethlehem House.

“There are some people we are unable to serve for some reason that he is able to serve, and then there are times that some of his folks may transition over here,” she said. “I have the utmost respect for Phillip and his organization.”

“We can’t help everybody, but when you have that impression of ‘I need to do something,’ my answer is Hope Shelter,” Fletcher said. “Other people have to figure out for themselves what they want to do.

Fletcher said one of the goals of the Unseen Campaign is to raise $2,000 for Hope Shelter’s operations, transportation for men who stay there to get to job interviews, cleaning supplies and toiletry items.

“People may donate those items as well,” he said.

Unseen campaign T-shirts are for sale for $20 on the website www.conwaysunseen.weebly.com.

The second category of the campaign is “Why are they unseen?”

One man who came to the panel discussion was homeless because he helped someone else by taking her in, “and her bad decisions made him homeless,” Fletcher said.

“A woman who was abused has nowhere to go. She ends up on the street or on a person’s couch. She didn’t choose that; somebody did that to her,” Fletcher said.

“You can’t make this blanket statement that, ‘Oh, they’re homeless because of their own decisions.’”

A Why Are They Unseen? discussion and fundraiser will be held from 8 a.m. to 1 p.m. Sunday at Stoby’s Restaurant, 805 Donaghey Ave.

The cost is $5 for a pancake breakfast.

The third category, he said, is “How do we go about making them seen?”

“We don’t really have a homeless problem like in a big city like in Little Rock where you can see people every day, like driving downtown,” Fletcher said.

“Here in Conway, it’s a little different. We have Bethlehem House. … We have Renewal Ranch in Perry County, just outside Conway, and we have a domestic-abuse center for the women, but that’s about it. It’s not like Little Rock where it’s got some major services for homeless individuals,” he said.

“We want people to creatively think, ‘How can I pay attention to a person’s circumstances, and how can I act?’ It doesn’t necessarily mean you have to give someone money, and you may not be able to take them into your home.”

Fletcher said the moderator at the panel asked the homeless and formerly homeless people which was more important, their emotional or physical needs?

“They all said emotional,” Fletcher said. “They said, ‘I’ll find some way to make it through the day; I’ll find some type of food.’ But that emotional support of someone saying, ‘Hey, I see you. It’ll be OK,’ or ‘I’ll pray for you.’ That was important.

“You don’t need to put somebody in your car, just, ‘I see you as a human being who’s suffering.’”

Fletcher said CoHO has homeless kits that include a blanket and toiletries.

“Put one in your trunk, and if you see someone in that situation, … it’s not just a smile and ‘How are you?’ but here’s something I can give to them.

“We want to empower people to be human and love your neighbor,” Fletcher said.