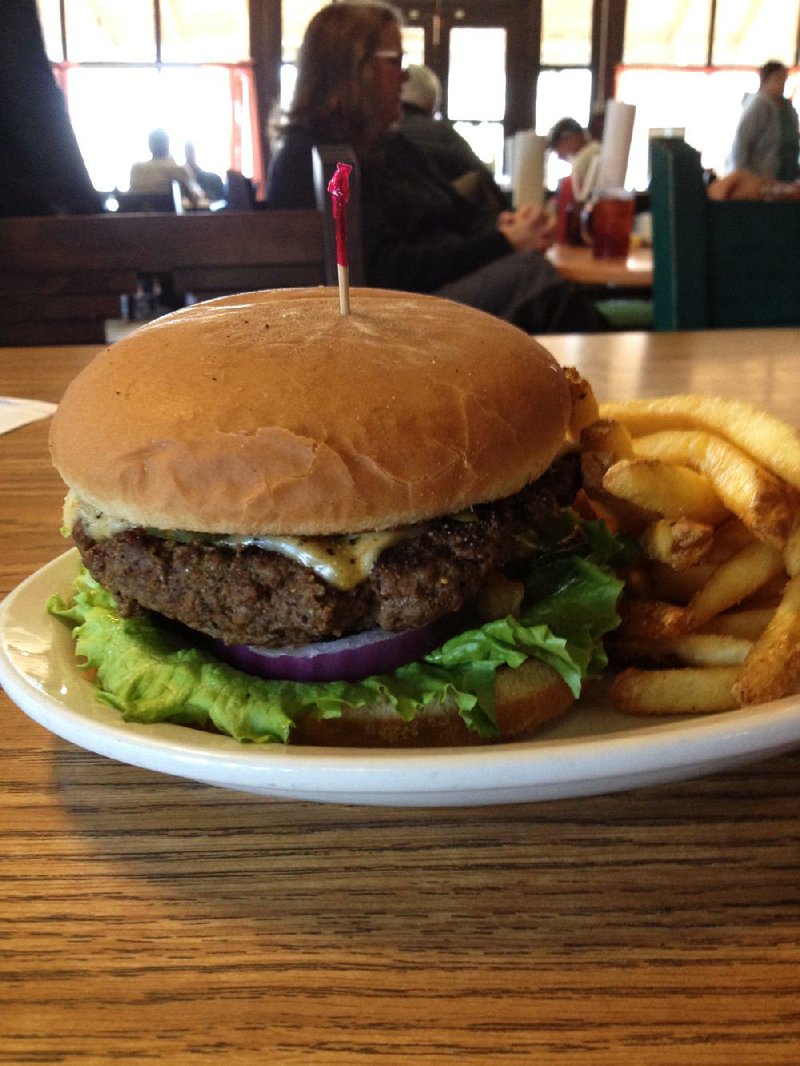 Cotham’s Mercantile serves up its 17-ounce Hub Cap burgers and, for smaller appetites, a regular-size patty like this Jalapeno Cheeseburger, with fries.

Local treasures, dining establishments included, are often found in the most unlikely or modest of places.

Sure, central Arkansas has a respectable standing in its offerings of white-cloth dining establishments. But it’s best to keep those tastebuds open to other options as culinary delights can flow forth from the humblest of kitchens and land on the scuffed, faux-wood-grain tables of the most rustic of restaurants.

Cotham’s Mercantile in Scott is such a spot in the old two-lane road southeast of Little Rock. A former general-store-turned-restaurant, Cotham’s was cool before shabby was chic. Adding to the ambience are the store’s vintage wooden floors and wooden shelves and glass display cases filled with vintage framed photographs and a hodgepodge of antique hats, bottles and cans.

The menu may be down-home but the patrons who flock to it are often high profile. If fellow diners at the table across the aisle look familiar, it’s probably because they are. Amid the prominent politicians and businessmen who frequent it, tourists and visitors to the area also make their way there.

The present store, constructed in 1912, once served as a general store to local farmers and plantation owners. And, according to Cotham’s history on the front of the menu, it has also served as a military commissary and a jail for local law violators awaiting trial by a circuit-riding judge.

Things began heating up in 1984 when a small dining area was opened to serve lunch to area farmers. After politicians like Gov. Bill Clinton and Sen. David Pryor discovered the place and began frequenting it, the restaurant adopted the slogan “Where the Elite Meet to Eat.” Even as president in 1995, Clinton, complete with his entourage, returned to Cotham’s during a visit to Arkansas.

Throw in the novelty of a 17-ounce “Hub Cap” burger and a culinary landmark was born.

Beyond the Hub Cap ($10.79) and another version made with jalapenos ($10.99), most of the sandwich offerings are dressed with mayonnaise, lettuce, tomato, pickle and onion. All of them are served with fries ($2.29 to substitute onion rings, $2.59 for cornmeal-coated fried green tomatoes, or $2.29 for fried pickles). Sandwich choices in the $7 to $8 range include chicken-fried steak, fried chicken breast, grilled chicken breast and fish.

In addition to side salads, there are also entree versions ($8.09) featuring grilled or fried chicken breast.

When it comes to fish, there’s a choice of two-piece, three-piece or five-piece cornmeal-coated fried catfish dinners which come with french fries, coleslaw, hush puppies, and corn fritters priced from $8.99 to $14.99.

Specials, priced at $7.29 and including a choice of two vegetables, rolls, and regular or jalapeno cornbread, feature fried pork chops on Monday, chicken and dumplings on Tuesday, meatloaf on Wednesday, and fried chicken on Thursday (no specials on Fridays or Saturdays).

Cotham’s doesn’t forget the kiddos; those 12 and under can order children’s meals with fries. Choices include the Lug Nut hamburger or cheeseburger, grilled-cheese sandwich, chicken nuggets, and catfish nuggets ($2.99-$5.99).

On my visit, the jalapeno cheeseburger ($7.59) and accompanying fries were as good as anticipated, the pepper jack cheese and slices of jalapenos topping the burger adding just the right amount of zest. The fries arrived warm, crispy and perfectly salted.

Those who need to top off their meal with a sweet finale won’t be disappointed in the choices at Cotham’s. There are peach or blackberry cobblers ($3.29) and hot fudge sundaes ($3.59) and Cotham’s specialty Mississippi Mud Pie (half for $3.99 and a whole for $6.39) featuring vanilla ice cream wedged between two layers of chocolate cake, covered in hot fudge and topped with whipped cream. Then there are the homemade fried pies (peach, chocolate, apricot, apple, blackberry, sweet potato and strawberry) for $2.39.

A word to the wise - those who have their appetites set on a certain flavor need to arrive early and order their pie with their meal.I craved chocolate, but by the time I got around to ordering it, they were out so I had to settle for strawberry, which, as it turned out, wasn’t settling at all.

After having first visited Cotham’s upon moving to Arkansas in the early 1990s, the most recent visit was like revisiting a dear, longtime, trusted friend I hadn’t seen in a while. Although some time had passed, it didn’t seem that way. Cotham’s is comforting, reliable and always a joy.