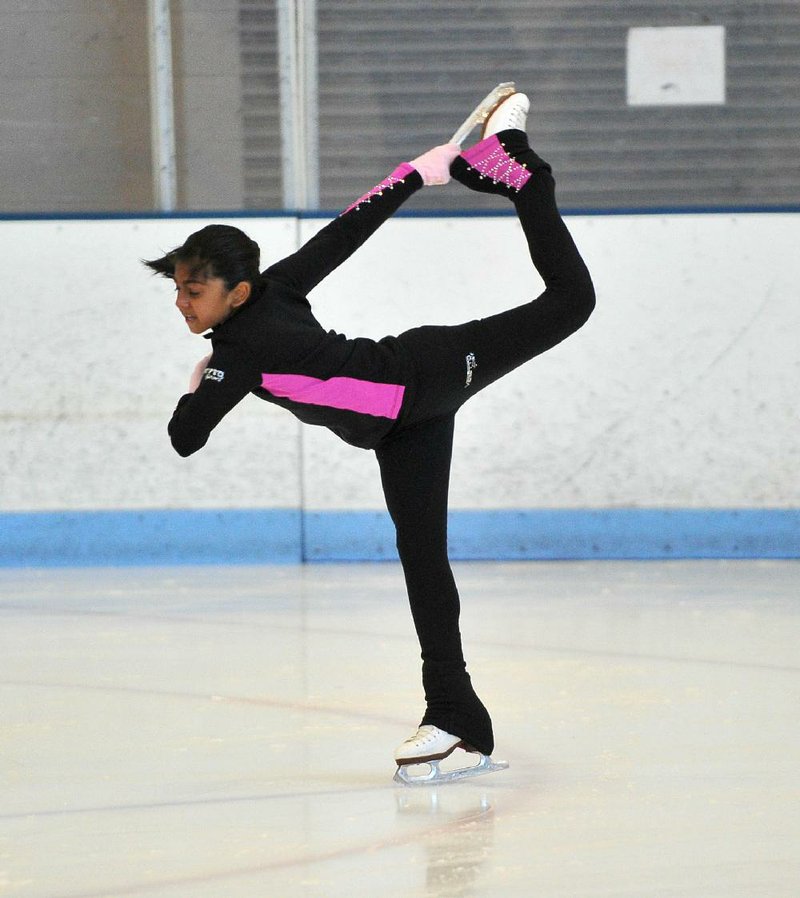 Some states churn out elite figure skaters. New York has more than 40 clubs. Massachusetts has 36. California has 27 and a history of producing Olympians.

Arkansas, meanwhile, has only two clubs sanctioned by U.S. Figure Skating, the sport’s governing body since 1921. Together these clubs contribute fewer than 150 to the 165,000 U.S. Figure Skating members nationwide. But each of Arkansas’ clubs - Diamond Edge in Little Rock and Ozark Figure Skating in Springdale - nurtures at least one pre-teen Olympic hopeful.

For those children and the other members, the clubs stage annual shows, negotiate ice time at multiuse facilities and organize test sessions to determine competition levels.

“It’s like a booster club to support the athletes,” says Robin Aprea, 40, who coaches Pooja Kalyan, the highest ranked skater in the state.

Aprea is a member of Ozark now, but she grew up in Little Rock. In the early ’80s, her family helped found Diamond Edge Figure Skating Club, which has been around 15 years longer than Ozark and is twice as large.

As such, she sits on panels at regional test sessions and competitions. To become a judge, she had to get sponsorship from a veteran judge, take a two-day training intensive at Minnesota’s Mall of America, pass tests and trial-judge for a year. And that’s the accelerated path, for people with skating experience. It’s more complicated for those who come in cold.

Doray grew up in Atlanta. As a child, she traveled to California to train, staying with 1976 Olympian Dianne DeLeeuw’s family.

She still competes, although less seriously than she once did, and she juggles Diamond Edge duties with a full-time psychologist gig.

“To get out there and glide and float on the ice, the strength that you get from jumping and spinning - it kind of melts away everything else. Skating is my sanity,” she says.

For other Arkansans, like 11-year-old Pooja, skating is tantamount to breathing.

She enjoys violin, which she has played for six years, and ballet and track, but when she talks about these activities, she relates them to skating. Violin helps with “musicality,” ballet with “flexibility” and track with “endurance.”

Pooja started skating with Ozark Figure Skating Club at 5. By 6 she was competing. At 7, in addition to taking local lessons, she began traveling to Tulsa bi-weekly to train. She kept up this grueling travel schedule for the next three years.

U.S. Figure Skating has two general competition tracks, one for youth and one for adults. There’s also a “qualifying track,” open only to youth who have passed the first four levels of testing. Qualifying skaters who do well at Regionals may advance to Sectionals and then Nationals.

Pooja began skating this qualifying track during the 2013 season. She placed first at Southwest Regionals, second at Midwest Sectionals and fifth at Nationals that year. This year she skated in a higher division, competing against girls who were landing triple axels, despite not having a solid double. (She does now.) She won Regionals again, placed third in Sectionals and ranked 10th at Nationals.

She spends a month each summer and many of her school breaks training in California with Frank Carroll, who coached Michelle Kwan and currently coaches Evan Lysacek and Gracie Gold. She skates in custom-fit boots costing more than $1,000 a pair and costumes made by a dressmaker in Dallas. A choreographer from Colorado creates her competition programs.

Pooja’s mother, Suguna Madaiah, estimates that they spend $12,000 a year on skating. And since Madaiah and her husband are full-time physicians, sometimes their daughter’s travel schedule is difficult to swing. But Madaiah tries to keep perspective: “My biggest thing is, as long as she’s happy and she still loves it and is putting 100 percent in, I’m not worried about the results. If it gets to a point where it’s not what she wants, we’ll do something else or just do itfor fun.”

Skating has taught Pooja discipline, focus, how to accept defeat and how to set goals.

“She’s very mature for her age. Even if there are girls who’ve done better or are technically stronger, she still seems to handle the pressure well. We have instilled in her to keep the focus on the self and not on what someone else is doing, to just go out there and do your best,” Madaiah says.

Pooja loves competing. “I really like presenting myself and showing all my hard work … I’m excited and confident, all at the same time,” she says.

Her best trick is the Biellmann spin, where she grabs a blade and raises a leg over and behind her head, rotating quickly on her standing leg. But she also likes to do double lutzes, double loops, double toe jumps. (The lutz is basically a counter-rotated axel, and the “loop” and “toe” refer to takeoff and landing methods.)

She knows that, one day, she may have to leave Arkansas permanently for training: “If I’m good enough, and I have all of my jumps and everything that I need to go to the Olympics and succeed in world competitions, I think I would be able to do that. Otherwise, I’ll probably just stay here and train here.”

Madaiah worries about having to make that decision. “I probably get more overwhelmed than she does, because you don’t know what the endpoint is. It’s such a gamble to just pack up and move for skating,” she says.

Pooja and Madaiah love Ozark and say the club has been supportive.

Aprea, who has coached for 16 years, says Pooja has an incredible work ethic: “She’s on the ice first, and she’s the last one off … she’s an amazing spinner and an amazing jumper. Right now she’s trying to develop her presentation because, as you get a little older, that comes out more.”

Aprea and Jennifer Kelly, another of Pooja’s local coaches, stay in touch with Carroll and the extended team. “We all pretty much know the goals and the plan and work toward that,” Aprea says.

Another Arkansas skater, Alex Han, 12, with Diamond Edge, advanced to Regionals this year as well. He hopes to make it to the Olympics and eventually, he wants to coach. Like Pooja, Alex travels for training, spending time with a Dallas coach several times a year.

On a recent Friday evening, the ice rink at the Arkansas Skatium is packed. Coaches give private lessons; a trio of middle-school girls skate through a show piece; kids dart about, goofing off; and individual skaters practice spins and jumps.

Pop music plays over the loudspeakers, and dozens of conversations bleed into the scrape of dozens of blades on ice. The temperature indoors is somewhere in the 40s. Parents huddle under blankets in the stands, and skaters sport gloves and limbs sheathed in spandex.

Billie O’Neel, 51, tall, lean and a former show skater, does a few warm-up circles before launching into an axel. She’s one of Diamond Edge’s best adult competitors.

O’Neel picked up the sport at 12, after watching Dorothy Hamill deliver a delayed axel in the 1976 World Championships on her family’s TV set.“I cut my hair, bought the doll, bought the shampoo,” she says.

She went the show route, touring with the chorus of The Ice Follies when she was 18.

“I guess I knew when I was 14 or 15 that the Olympics wasn’t going to happen, but that doesn’t mean that I can’t still skate. Most of my competitive success came in my 30s,” she says.

Next month, O’Neel will travel to Massachusetts for the adult U.S. Figure Skating Nationals. Her goal is to “skate clean,” meaning, no falls.

“And then, if you can make it seem inspired and like something decent people would pay money to see, that’s frosting on the cake.”

For Nationals, O’Neel is relearning skills she lost over the years: “I’m doing a flying back sit-spin that I haven’t done in 10 years. And I wouldn’t be if I hadn’t entered a competition where a flying spin is required. …

“When you do something perfectly, it actually takes very little effort. It’s when you drop your shoulder or go in wrong or land wrong that it takes effort to hold onto it.”

It’s this - the sensation of effortlessness, the lift of near flight, that draws Alex to the ice almost daily. Even while nursing Olympic dreams, he admits that for him, figure skating is not about competing.

“It’s fun to just skate around, because of the wind. It’s really smooth,” he says. “At competitions, you just do your program once, and then it’s over. You don’t have much time.”