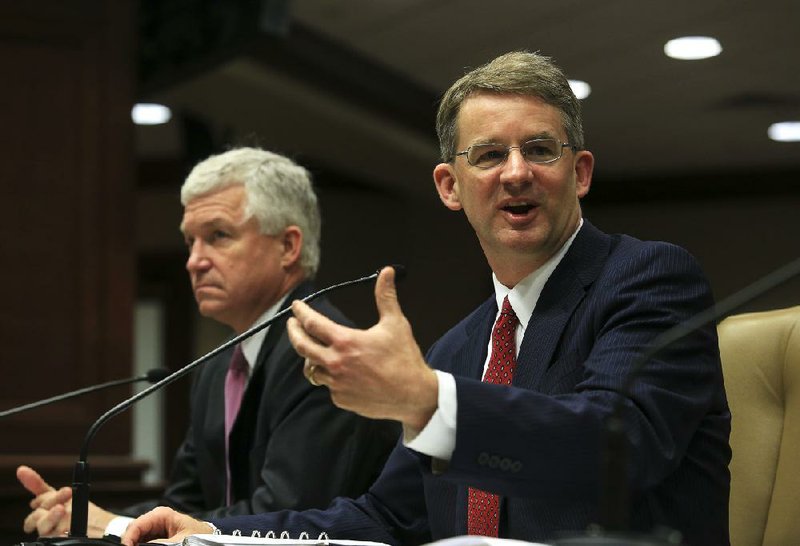 Clarification: Legislation authorizing the spending of federal funds for the private option in the expanded Medicaid program during the fiscal year that starts July 1 requires the state of Arkansas to secure federal approval by Feb. 1, 2015, for changes to the program. This article omitted the year of the deadline.

Those benefits, which are not among those mandated by the federal healthcare overhaul law, will likely not be included in the plans available to people who enroll in coverage under the so-called private option next year, Director Andy Allison said.

“We are paying for benefits that we did not anticipate paying for,” Allison told lawmakers during a joint meeting of the House and Senate public health committees.

Marketed under the name Ambetter of Arkansas, the plans that include adult vision and dental benefits are offered by St. Louis-based Centene Corp. through the state’s health insurance exchange in 29 of the state’s 75 counties.

Of the four companies offering plans on the exchange, Centene is the only one with plans that include those benefits as part of a comprehensive package.

Under the private option, most people who qualify for coverage under the state’s expanded Medicaid program can sign up for silver - or medium-coverage level - plans on the exchange and have the premiums paid by Medicaid.

That includes the premiums for those who sign up for the Centene plans with vision and dental benefits. However, enrollees in those plans in some cases must make co-payments associated with the benefits.

Arkansas Surgeon General Joe Thompson described the inclusion of the extra benefits as a “one-year glitch” that resulted from the rush to implement the private option, including gaining federal approval and crafting requirements for insurance companies, after the program was approved by the Legislature last year.

“This was one of the wrinkles that we didn’t identify,” Thompson said.

The U.S. Department of Health and Human Services’ Centers for Medicare and Medicaid Services approved the inclusion of the benefits,but they were not part of the state’s estimate for the cost of providing coverage, Allison said.

Starting in 2015, Allison said, private-option enrollees will likely be able to enroll only in silver-level plans that include the essential health benefits mandated under the health-care law, plus benefits required under state law.

People who enrolled in the plans this year would have to move to different plans, he said.

Kate Luck, a spokesman for the state Department of Human Services, said private-option enrollees would still be able to choose standalone vision and dental plans on the state’s health-insurance exchange but would be responsible for the premiums.

The state Insurance Department has not yet issued guidelines for insurance companies for plans that will be offered on the exchange next year.

Anna Strong, health policy director for Arkansas Advocates for Children and Families, said the state is “really under served when it comes to dental coverage.”

At the same time, she said, she understands the importance of “keeping an eye on the cost of the private option.”

“I think there’s a lot to consider, and we still have room for discussion,” she said.

The expansion of the Medicaid program extended eligibility to adults with incomes of up to 138 percent of the federal poverty level - $16,105 for an individual or $32,913 for a family of four, for instance.

As of Saturday, 149,666 Arkansans had been approved for coverage under the program.

In addition to paying the premiums for those on the private option, the Medicaid program makes additional payments to the insurance companies to reduce or eliminate any required out of-pocket spending by the enrollee for medical expenses.

As long as Arkansas’ costs are under the limits set in the waiver’s terms, the federal government will pay the full cost of the program through 2016.

If Arkansas’ costs exceed the limits, the state will owe the difference to the federal government at the end of the three years. But the terms of the waiver also allow the state to request that the cap be adjusted if it has information indicating that the spending caps “may under estimate the actual costs of medical assistance for the new adult group.”

Arkansas’ payments to the insurance companies for March averaged just over $485 per enrollee. That was up from an average of $476.48 per enrollee in January and $483.15 in February.

In addition to the vision and dental benefits, Allison said the average age of the enrollees was slightly higher than state officials had predicted, resulting in slightly higher premiums.

State Rep. David Meeks, R-Conway, asked whether Arkansas will end up owing money to the federal government as a result of the higher costs.

Allison said he was confident that the state could get the spending caps adjusted, but that his goal is to “beat the targets by as much as we can even without adjusting them.”

During the first year or two of the program, state officials want to encourage as many insurance companies as possible to participate.

In the future, state policies will encourage those companies to compete on price, which should lower the cost of providing the coverage, Allison said.

“This is a test of whether competition and price-selective purchasing can obtain a better value than an expansion of [the traditional Medicaid program] would,” Allison said. “I think the state stands a terrific chance of succeeding in that, even if we don’t adjust those targets.”

Legislation authorizing the spending of federal funds for the private option during the fiscal year that starts July 1 requires the state to secure federal approval by Feb. 1 for changes to the program.Those changes would include requiring co-payments or other charges to be paid by enrollees who have incomes of 50 percent to 100 percent of the federal poverty level; establishing a limited nonemergency medical transportation program; and allowing enrollees to establish health savings accounts.

Allison said his staff is working on those proposals, but that he wasn’t ready to share details Thursday.

Since coverage took effect on Jan. 1, Thompson said, doctors have not reported a surge of new patients seeking treatment, although traffic at pharmacies has increased.

He added that hospitals have reported that their spending on uncompensated care so far is lower than at the same time last year.

At the same time, he said, patients have been getting treatment for health conditions they’ve known about for some time or have just discovered.

“I think this is offering real help to people who historically have never had health insurance,” Thompson said. “You have removed financial barriers for them to be able to utilize those services.”