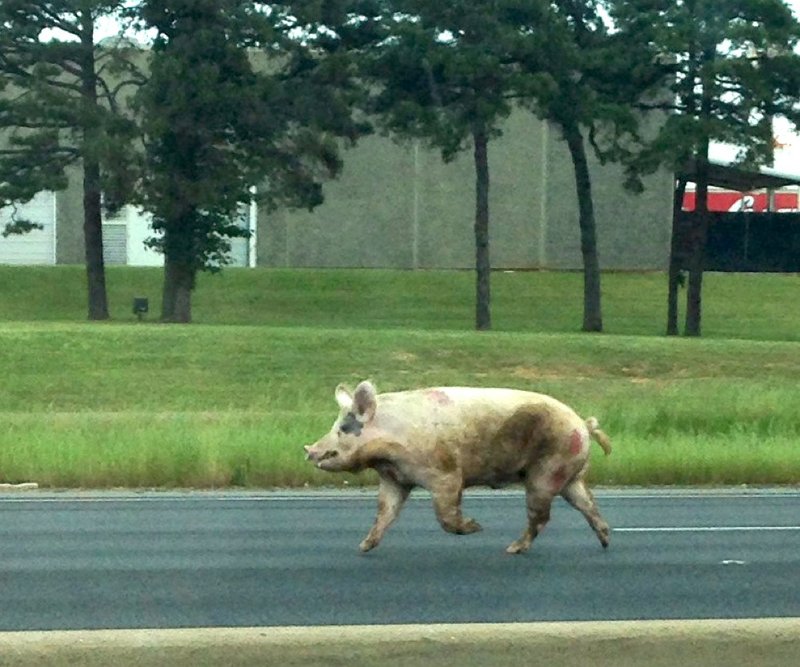 A pig runs down westbound Interstate 30 near 65th Street in Little Rock on Thursday, May 8, 2014.

A large pig enjoyed a few moments of freedom before being caught and put down after it escaped from its trailer on Interstate 30, snarling morning traffic.

It happened before 8:30 a.m. in the westbound lanes near the Scott Hamilton Drive exit.

Arkansas State Police on scene say the pig — which one estimate put at 300 pounds — jumped out of its trailer and ran around the interstate before its owners could corral it. At one point, one trooper said, they believed they had it surrounded when it made its way over the side of a police car.

The pig was ultimately tackled and moved to the shoulder, where it was killed. Several men in the vehicle that was hauling the pig said it was set to be slaughtered anyway. It wasn't clear if it was killed on the highway because it was injured or because officials feared it would escape again.

A second pig that was also in the trailer did not escape.

Little Rock Animal Services workers retrieved the escapee's carcass, and firefighters then washed it blood off the interstate with a hose.

Traffic was moving again through the area by 9:30 a.m.

Pig gets loose on Interstate 30