Mizzou nothing new for Vitello 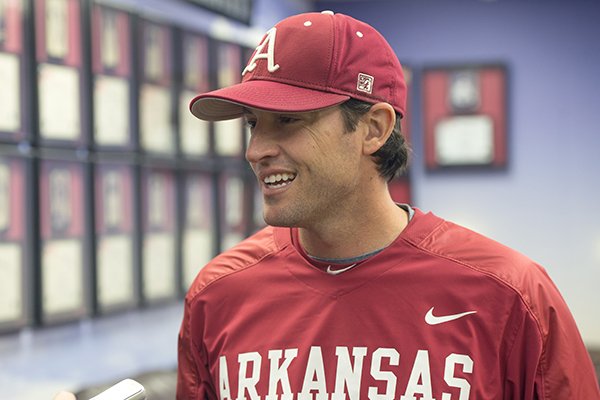 FAYETTEVILLE -- Arkansas assistant coach Tony Vitello may need to remind himself not to go into the home dugout this weekend when the Razorbacks play at Missouri.

"I definitely spent a lot of days -- and enjoyable ones -- in that particular dugout, but I'm a Razorback now," Vitello said. "I'll just go wherever the guys in red are."

RADIO Razorbacks Sports Network stadwide network. Not all games will be carried by all affiliates. Check local listings.

Vitello, 34, spent 11 years with the Missouri baseball program: three as a player, one as a volunteer assistant and seven as a full-time assistant coach.

When the Razorbacks open a three-game series against Missouri on Thursday night in Columbia, Mo., it will mark the first time Vitello has coached against his alma mater.

"I had a great experience at Missouri, and I love the city of Columbia and got a chance to really see it grow when I was there," said Vitello, who lettered three seasons as an infielder for the Tigers from 2000-2002 and earned a bachelor's degree in management and master's degree in business from Missouri. "I think Fayetteville's kind of going through the same process as enrollment has shot up at the university."

Vitello, from St. Louis, played and coached for Tim Jamison, who is in his 20th season as Missouri's coach. As a member of the coaching staff, Vitello helped the Tigers make seven NCAA regional appearances. He was the recruiting coordinator and pitching coach and assisted with the hitters.

"Coach Jamison introduced me into Division I baseball and was very generous to do so with a walk-on opportunity, and then to hire me at a young age and introduce me into college coaching," Vitello said. "Those two things will never go away for me."

"It's definitely been a hectic transition this first year, but I've grown to love Fayetteville," Vitello said. "I've honestly never enjoyed going to the office more as it relates to the setting I get to work in and how I'm treated and the people I'm around and what I'm learning.

"I'd like to think I'm every bit as much of a competitor as a baseball coach. I really do love to compete, and there's no better place to compete than the SEC. It's the best."

Arkansas Coach Dave Van Horn praised Vitello's contributions as a coach and recruiter. The Razorbacks have raised their batting average from .261 to .266 since opening a series against then-No. 1 South Carolina in early April.

"Offensively, we've actually jumped it up the last month of the season," Van Horn said. "That's with a lot of at-bats and facing the best pitching we've faced all year.

"So just thinking about the future and the guys that will be in the program next year, we should continue to get better offensively."

"He's just a ball of energy," Spoon said. "He's always focused and ready to go and gets us ready to play as well."

Vitello said he hasn't been feeling special emotions about his return to Missouri.

"That may change when I get on campus," he said. "For right now, I just want to win on Thursday night."