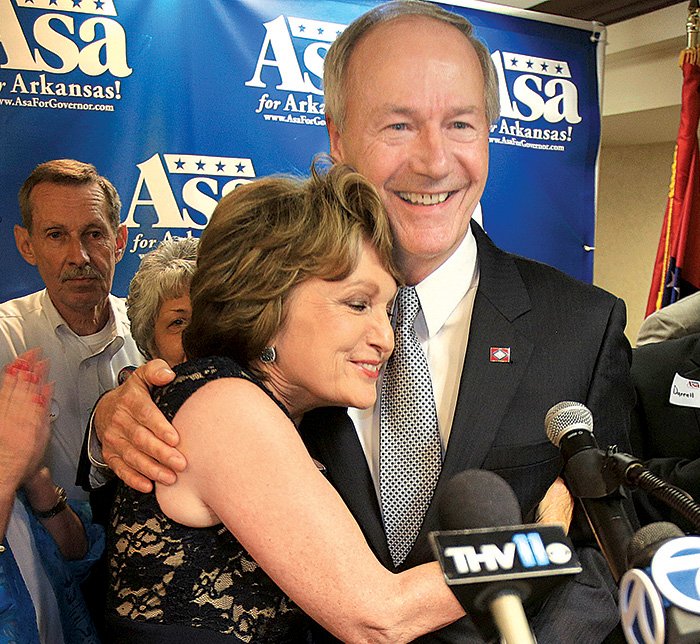 Asa Hutchinson celebrates with his wife, Susan, after addressing supporters Tuesday night at an election-watch party in Little Rock.

Ross said Tuesday that there are “huge differences” between himself and Hutchinson.

“He has a history of being partisan. I’m not. I am known for working across party lines to get the job done. I believe my experience, my temperament, my steadiness is really what the people of the state are looking for,” Ross said in an interview. “I am proud to be an Arkansas Democrat, but I am not running to be governor for the Democrats or Republicans. I am running to be governor for all the people in Arkansas.”

In response, Hutchinson said that when Ross gave more than $1 million to help House Democratic leader Nancy Pelosi and her allies to retain Congress, “that is pretty partisan in my book, so he chose his team and I chose my team. He gets all offended whenever I make an association between him and Pelosi. Well, he could make an association between me and [President George W.] Bush. That’s my team. That’s his team.”

Asked about the key issues in the race, Ross said he has a plan to achieve lower and fairer taxes, to improve education and to create more and better-paying jobs that he’ll discuss with people in each of the state’s 75 counties.

Hutchinson said Ross has “a pro-government approach versus a private-sector solution approach that I bring” and that their tax cut proposals “are totally different in objectives.”

“There is a net difference in his aiding and abetting the Affordable Care Act, the national health-care program that went through,” Hutchinson said.

Ross has repeatedly noted that he voted in Congress against the bill that became the federal Patient Protection and Affordable Care Act and for measures to repeal it, adding he voted for another version of health-care overhaul that died.

Neither Coleman nor Bryant could be reached for comment by telephone Tuesday night.

Democratic Gov. Mike Beebe, who has served since 2007, is barred from seeking re-election under the state’s term limits amendment.

The governor is paid $86,890 in salary in the current fiscal year and his salary will increase to $87,759 in the fiscal year starting July 1. Beebe’s successor will be sworn in into office in January.

Hutchinson announced his intention to run for governor in January 2013, and Coleman began his bid a month later.

According to his latest campaign-finance report, Hutchinson raised $2.2 million through May 10. Coleman reported total contributions of $497,777.

Hutchinson also is a former U.S. attorney for the Western District of Arkansas, administrator for the U.S. Drug Enforcement Administration and undersecretary for the U.S. Department of Homeland Security. He has lost bids for the U.S. Senate in 1986, attorney general in 1990 and governor in 2006.

Hutchinson has proposed cuts in state individual income tax rates that he estimates would reduce state tax revenue by about $100 million a year, saying it would make the state’s tax rates more competitive and lead to job creation.

Ross entered the race in April 2013 after Democratic Attorney General Dustin McDaniel of Little Rock withdrew from the race after an admission of an inappropriate relationship with a Hot Springs lawyer.

Bryant, who lost a 2010 race for the state House of Representatives and two races for a seat on the Little Rock Board of Directors (in 2010 and 2012), surprised Democratic officials by challenging Ross for the nomination.

According to his latest campaign finance report, Ross reported raising $4.4 million as of May 10. Bryant reported $250 in contributions and loaned her campaign another $15,004.

Ross has proposed overhauling the state’s income-tax brackets to gradually phase in changes that he said would ultimately reduce state revenue by about $575 million a year. He’s also proposed gradually cutting the state’s sales-anduse tax on partial replacement and repair of machinery used in manufacturing, saying that would eventually reduce state tax revenue by about $40 million a year.

Ross has proposed a phased-in expansion of the state’s pre-kindergarten program within the next decade, saying it would cost the state about $37 million more a year after it’s fully implemented.

Ross has said that he would protect the state’s program that uses federal Medicaid dollars to purchase private health insurance for low-income Arkansans. More than 120,000 Arkansans have been enrolled for health-insurance coverage through the program, known as the private option.

Arkansas’ version of Medicaid expansion will help hospitals survive cuts in Medicare reimbursement and get paid for treating people whom the hospitals previously treated for free, according to Ross.

But Hutchinson has said that he wants to learn more about the low-income Arkansans who have enrolled in the state’s private-option program. He wants to determine the cost to the state three to five years from now to help decide “whether this is working and right for our future.”

Hutchinson went to cast his vote early Monday in Bentonville but forgot his photo ID. “He was able to get somebody to bring his ID to him before he tried to vote, and then he didn’t have a problem,” said Hutchinson spokesman Christian Olson.

Ross presented his photo ID before he voted in west Little Rock on Tuesday afternoon.