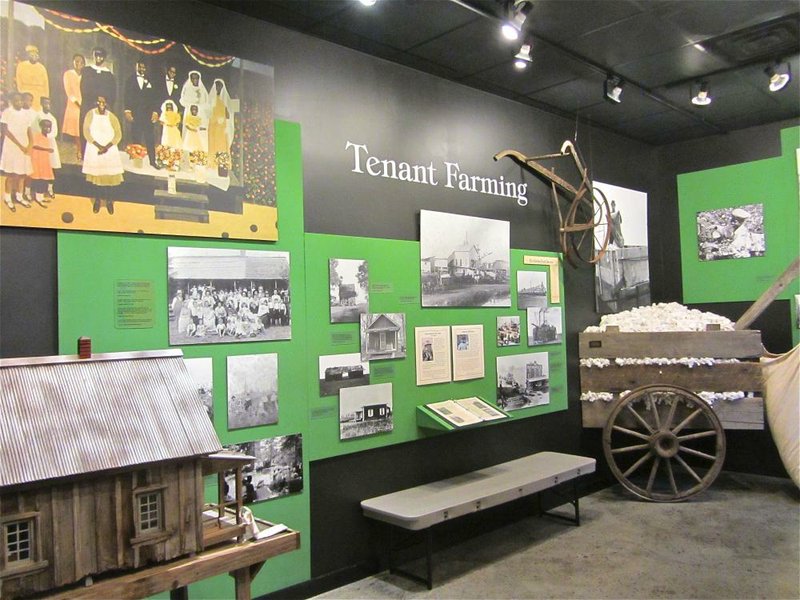 The Southern Tenant Farmers Museum in Tyronza tells the story of a racially integrated union that made its mark during the Great Depression of the 1930s.

This is the third of four stories about Northeast Arkansas’ Sunken Lands, areas that literally sank during the 1811-1812 New Madrid earthquakes, transforming verdant forests into mosquito-infested swamps.

TODAY: The Southern Tenant Farmers Museum in Tyronza chronicles the story of a sharecroppers' labor union established in 1934.

SUNDAY: Wilson, a former corporate town, is reborn as its own municipality.

TYRONZA -- One of Arkansas' most enlightening and unlikely museums is tucked away in tiny Tyronza, in the Delta flatland of the state's northeast corner.

Opened eight years ago, the Southern Tenant Farmers Museum tells the story of a labor union established in 1934. That was peculiar enough in rural Arkansas -- given that even today, only 4 percent of Natural State workers are unionized.

Even stranger, at a time when the rigors of Jim Crow kept the races strictly segregated by law in Arkansas and the rest of the South, the Southern Tenant Farmers Union was formed by 11 whites and seven blacks. Membership remained racially integrated throughout its short and tremulous history. The union also welcomed female members at a time when that was exceptional.

A recent visit to the museum, an Arkansas State University heritage site, was enlivened by a guided tour from staff member Cathy Hunt. She steered wife Marcia and me through the exhibits with informed commentary that brought the past alive.

Part of the union's background, Hunt explained, stemmed from the severe alteration of Poinsett County's landscape in the devastating New Madrid earthquakes of 1811-1812. The ground sank or rose by several feet in some places, which made the farming of cotton and other crops over the next century even more challenging.

The sharecropping that succeeded slavery after the Civil War fell on severely hard times during the Great Depression that followed the stock market collapse of 1929. When Franklin D. Roosevelt's new presidency tried to deal with the rural crisis by offering compensation for the plowing under of crops, many landowners refused to share the proceeds with their tenants.

That brought about the union, organized by H.L. Mitchell and Clay East. In an odd juxtaposition, both were socialists who also operated businesses in Tyronza.

Mitchell ran a dry-cleaning shop, while East owned an adjoining service station. Those two structures and the former Bank of Tyronza, on what was facetiously labeled "Red Square" in the mid-'30s, house the museum.

The voices of Mitchell and East can be heard at kiosks from interviews recorded in the 1980s. In one, East talks about the integration that ran several decades ahead of its time in a union whose membership totaled 35,000 by 1938.

"We didn't have any troubles about the race situation for the simple reason I told them they were all working for the same thing," he is heard saying. "You're eatin' the same kind of food, everything is the same. You can't have two unions. If you do, one of them will be fightin' the other one. It has to be integrated."

Attacks by vigilantes in thrall to the planters forced the union to move its headquarters to Memphis after a couple of years. By the early 1940s, it no longer functioned. But it achieved real if short-term success in raising pay for sharecroppers, as the museum records.

Bringing the union to wide national attention was a segment in The March of Time, a popular newsreel series shown in movie theaters in the 1930s. An eight-minute video version can be viewed at the museum. Even with staged dramatization and overwrought commentary, a potent story is told.

Accenting the union's story is music from a museum jukebox that plays the songs of John Handcox and other labor troubadours. The union's songwriter and poet, Brinkley native Handcox wrote the memorable "There Is Mean Things Happenin' in This Land," with such Delta-inspired lines as "Too much cotton in our sacks, but we have none on our backs."

The museum hopes to increase its visibility with the opening this summer of Johnny Cash's boyhood home near Dyess, some 16 miles to the northeast. Cash's family, like the union members, labored on the land for pitifully little reward.