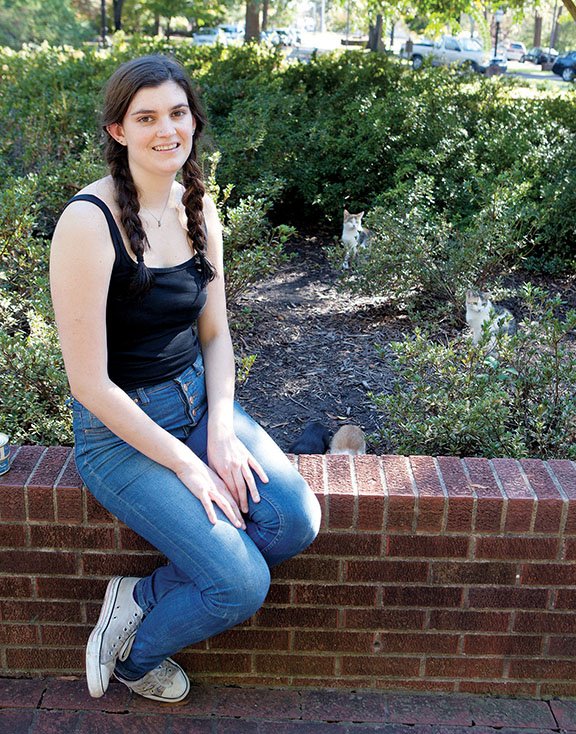 Hendrix College freshman Hannah McCarthy, 18, and an employee of the college care for the feral cats on school’s Conway campus and have recently gotten 10 of the 17 animals spayed or neutered. McCarthy has applied for $1,500 to make stabilizing the cat colony one of her required Odyssey Program projects. At press time, McCarthy had not yet been notified about the funding, but she was optimistic that it would be granted.

CONWAY — Hendrix College freshman Hannah McCarthy and staff member Darryl Manes drive to campus about 5:30 p.m. every day, and the cats come running — all 17 of them.

“We know exactly each cat; each one has a name,” McCarthy said. On Wednesday afternoon, she immediately saw Paint, Milkshake, Georgia and Charlie, whom she named after her cat at home in St. Louis, Missouri. “He reminded me of my spunky little cat at home. Each one has its own personality.”

McCarthy has requested “just under” $1,500 through the Odyssey Program to stabilize the Hendrix cat colony by spaying and neutering them. Each student at Hendrix College must complete three Odyssey projects in three different categories before graduating.

“We’re supposed to hear on funding any day now,” she said. McCarthy said officials in the Odyssey Office on campus indicated that her project would be approved, so she’s already started taking the cats to be “fixed” at Companions veterinary clinic in Greenbrier.

McCarthy said of the 17 cats, 10 have been spayed or neutered, and then their ears are clipped. “After we spayed and neutered … they’ve

actually become a little more domesticated,” she said. “There are two dads in this colony; we neutered one of the dads, and the other is on the list.”

She describes the cats as “semi-feral.” “None of them are mean, or aggressive, or anything like that — it’s more the scared aspect of feralness,” she said. ‘They let me touch them quite a bit and the same with Darryl, because they’re so used to us. We show up every single day without fail to feed them. They’ll all run out to us and meow till we have the food out.”

McCarthy, who is a pre-veterinary major, said she has a background in animal rescue. “I worked at a no-kill, no-cage animal shelter,” she said. “I also interned at a vet’s office and got to oversee some awesome surgeries.”

She said she became interested in the welfare of the Hendrix cats when she was a junior in high school and visited her older sister, Gretchen, then a freshman at Hendrix. Gretchen is a junior now.

“I would visit her, and I saw all these cats on campus. I kept telling my sister, ‘You need to do something; you need to do something!’ When I decided to come here, I knew I had to do something,” McCarthy said. “Everyone loves the cats, likes to see them, but nobody knew how to step up and do something. Even the president of the school, upon seeing them, went to Walmart with his wife and came back and fed them — and some of the teachers feed them as well,” she said.

McCarthy said during the first week of school in August she heard Manes talking about cats, and they discovered they had similar backgrounds in animal rescue. They started the project toward the end of August, she said, buying their own cat food. Through her work at a vet’s office in Missouri, she befriended a distributor of pet food, she said, and her father brought 100 donated pounds from St. Louis when he visited her.

Manes, a Conway resident, works in Academic Support Services at Hendrix, where he runs the testing center and started the Braille Center.

“I’ve just always had a love for animals, and I’ve always enjoyed the company of animals and the reciprocity you get when you help a dog or cat,” he said. “They thank you a million times over.”

The colony includes two fathers and three mothers, he said, and the rest of the cats are their offspring.

“The goal in the project was to stabilize the colony; they wouldn’t reproduce from within, because we get everyone spayed and neutered,” he said. Cats are territorial, he said, so they won’t let any other cat in the colony.

Although some feral cats might be trouble to catch, these have been easy to handle, so far.

“I think we’ve done 10 now; I think nine of them have walked into the carriers,” Manes said. “They are feral, and you wouldn’t want to try to pick one up and pet it, because they are still wild.”

He said if the cats became domesticated, he and McCarthy would try to find homes for them.

“It’s a wonderful Odyssey,” he said.