Hutchinson projected to be next Arkansas governor 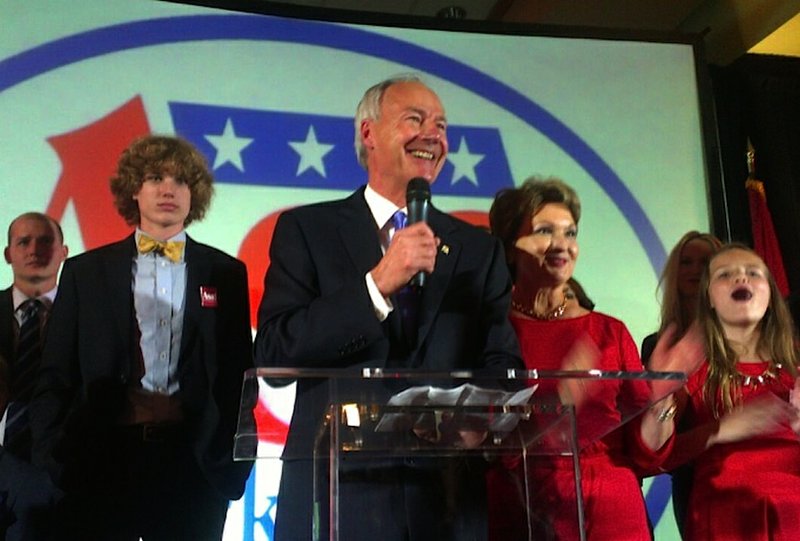 Republican Asa Hutchinson accepts victory in the race for Arkansas governor Tuesday evening at the Embassy Suites in Little Rock.

Republican Asa Hutchinson has won the election for governor, beating Democratic opponent Mike Ross and ascending to the state's top office eight years after his bid came up short, according to The Associated Press' projections as the polls closed at 7:30 p.m.

The Associated Press called the race for Hutchinson at 7:31 p.m.

“It’s great for me personally, but I think whats more important is what this means for the people of Arkansas and what I can do for them,” Hutchinson said about his win before retreating from his election watch party to spend time with his family.

Hutchinson is a former congressman who represented Arkansas's 3rd District before being tapped to lead the U.S. Drug Enforcement Administration under President George W. Bush. He went on to be the first undersecretary of the Department of Homeland Security before his unsuccessful run for governor in 2006 against Democrat Mike Beebe.

Hutchinson's platform includes plans to reduce income taxes beginning with middle-income earners and the addition of computer-science classes in all Arkansas high schools.

Ross represented Arkansas's 4th District from 2001 to 2013, choosing not to seek reelection because, he said, he was tired of Washington politics. He announced he was running and quickly became the frontrunner for the Democratic nomination for governor after Attorney General Dustin McDaniel admitted to an inappropriate relationship and dropped out of the race.

Ross positioned himself as an extension of popular outgoing Gov. Mike Beebe while calling for funding pre-kindergarten programs across the state and an overhaul of the state's tax code by redrawing tax brackets based on historical inflation.

Ross spoke at the Marriott in downtown Little Rock, applauding the efforts of his supporters who helped him during his campaign. He said he had called Hutchinson to congratulate him on his victory.

“He ran a great campaign, but so did we. I’m so proud of the policies and ideas we put forth, and the principles for which this campaign was fought,” Ross said. “I leave this campaign loving our state and its people even more than I did on the day that I announced for governor."

In addition, Ross said, he will continue to do his part to make Arkansas a better place.

“While I may not have the opportunity to lead this state, I will never stop believing in our state and its people,” he said. “I’ll never stop doing my part to make Arkansas an even better place to call home, and I call on all Arkansans to do the same.”

Hutchinson walked out on the stage to give his acceptance speech and was greeted by raucous cheers from the crowd.

"A few minutes ago I received a call from Mike Ross who conceded the election very graciously, who wished Susan and me the best of luck in the governorship and who congratulated us all on this victory,” Hutchinson said.

Hutchinson thanked his wife, Susan, whom he said “will make a wonderful first lady of Arkansas.”

"We need to earn the respect of the people of Arkansas by reaching out to those who may not have supported us," Hutchinson said. "But to say, 'You’re a part of this team,' and to make sure this is a new day in Arkansas, not just for us, but for all Arkansans.”

Read Wednesday’s Arkansas Democrat-Gazette for more on this story.