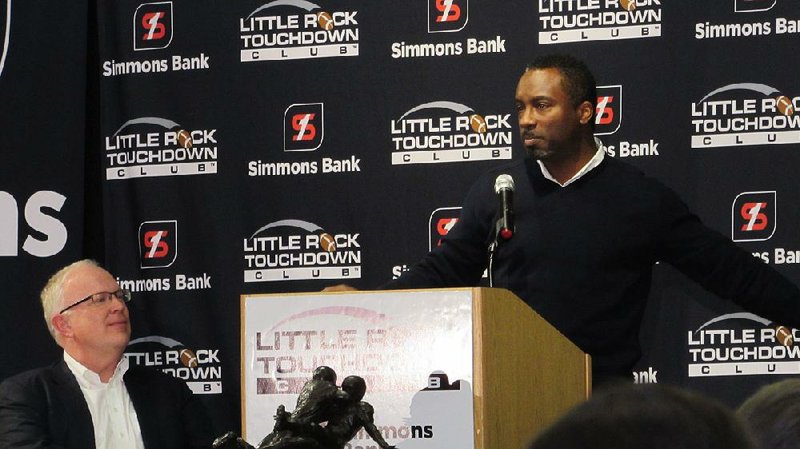 Ismail was one of the most electrifying players in college football in 1990 and finished second behind Brigham Young quarterback Ty Detmer for the Heisman Trophy.

The Fighting Irish faced Colorado in the 1991 Orange Bowl in Miami, which turned out to be Ismail's last collegiate game.

Notre Dame trailed Colorado 10-9 with 1:06 remaining and the Buffaloes were forced to punt. Ismail, a junior, was deep to return. He recalled a moment he had with Irish Coach Lou Holtz on the play while speaking at the Little Rock Touchdown Club at the Embassy Suites in Little Rock on Monday.

Ismail returned the punt 92 yards for a touchdown that would have given the Fighting Irish a 15-10 lead with 43 seconds left. However, the touchdown was called back on a clipping penalty.

Colorado (11-1-1) held on to win 10-9 and earned a share of the national championship with Georgia Tech. The Buffaloes were named No. 1 in the Associated Press poll, while Georgia Tech (11-0-1) topped the coaches poll.

Instead of going to the NFL in 1991, Ismail signed a four-year contract worth $18.2 million with the Canadian Football League's Toronto Argonauts. He spent two years in Canada before going to the NFL, where he played nine seasons with the Los Angeles/Oakland Raiders (1993-1995), Carolina Panthers (1996-1998) and Dallas Cowboys (1999-2001).

"I think because of that, the playoff is a good thing."

Ismail, 44, travels around the country as a motivational speaker, but he still finds time to keep up with Notre Dame football. The Fighting Irish, under fifth-year coach Brian Kelly, is 7-1 with its only loss coming at Florida State last month.

Notre Dame's loss to Alabama in the 2013 national championship was an eye-opener for the Fighting Irish, Ismail said.

"The SEC, I don't care if people hate on them or not, to me, as far as college football as concerned, that's the king of the hill," Ismail said. "You have to compare yourself to the standards they hold and the product they put on the field. When he [Kelly] saw that, it changed his recruiting philosophy. Outside of the call we got two weeks ago at Florida State, I think it's working."