'Need to have time' on private option 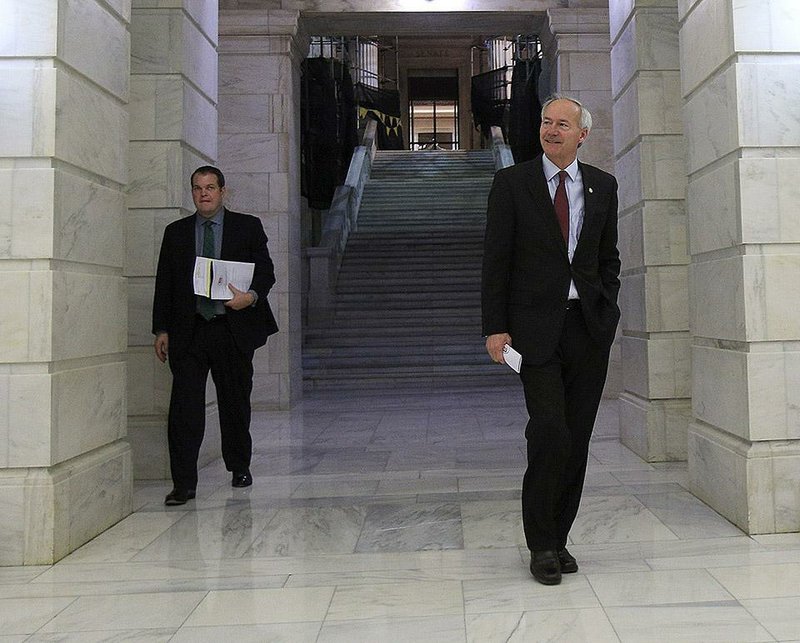 Gov.-elect Asa Hutchinson said Thursday that he won't decide whether he'll ask the Legislature to reauthorize the state's private option until at least the end of January.

The program, which uses federal Medicaid dollars to purchase private health insurance for low-income Arkansans, barely received approval votes in 2013 and early this year and is opposed by several newly elected lawmakers.

"I need to have time during the transition to get a better handle on the specifics of the budget and what revisions I want to make in the budget once I'm sworn in as governor," the Republican from Rogers said during a news conference at the state Capitol. He said he also wants to work with state Department of Human Services officials on changes to the program.

He also announced who he has selected for his transition steering committee.

Hutchinson's comments about the private option came two days after several Republican private-option opponents unseated Democrats who had voted for the program.

The results of Tuesday's election led one of the three legislative architects of the program, state Sen. Jonathan Dismang, R-Searcy, to declare on Wednesday that "in its current form, I don't believe there is any way it survives." Dismang said he's not sure what the program could look like in the future.

In 2013 and 2014, funding for the program narrowly cleared the House and Senate with the required three-fourths supermajority of the 100-member state House of Representatives and 35-member Senate.

The current program extends insurance coverage to adults with incomes up to 138 percent of the poverty level -- $16,105 for an individual, for instance, or $32,913 for a family of four. More than 180,000 Arkansans have been enrolled in private health insurance through the program, according to the Department of Human Services.

Federal Medicaid funds pay for 100 percent of the program until fiscal 2017, when the state will pick up 5 percent of the cost. The state's share of the tab will gradually increase up to 10 percent in fiscal 2020.

The state is financing $85 million in tax cuts in fiscal year 2015 from the state's savings from the private option such as reduced uncompensated care costs, according to state officials.

Asked about Beebe's recommendation, Hutchinson said Thursday that Beebe "is governor until Jan. 13, and so he has to present his budget [for fiscal 2016] and he's outlined that, which is fine.

"I am going to take a second look at it," he said. "Obviously, tax cuts are important to me. My highest priority is the middle-class tax cut, reducing the tax rate. ... That's not factored into the governor's budget, so I've got to factor that in, so there will be some changes that I will make, and I think the voters would expect that."

"It is important that this is not about Republican leadership. It is about our bipartisan leadership and cooperation in the state of Arkansas," he said.

A day after he named Sen. Michael Lamoureux, R-Russellville, as his chief of staff and transition director, Hutchinson said his steering committee for the transition will be composed of six leaders across the state who will give him guidance and work with the transition team and state agencies.

He said those on the steering committee will be Mike Carroll of Fort Smith, a certified public accountant; Stacy Hurst, who owns a floral shop company and is on the Little Rock Board of Directors; Alec Farmer, a Jonesboro farmer; Philip Taldo, a Springdale real estate agent; Arnell Willis, Helena-West Helena mayor and a former state representative; and Steve Lux of Hot Springs Village, retired vice president of operations for Central Moloney Inc.

Hutchinson said he was surprised to get a call from President Barack Obama on Tuesday night and it was "a very gracious [and] congratulatory call."

Obama "recognized the key role that governors play in directing national policy and he wants to have a good partnership with the governors. I certainly expressed my support for that and willingness to work with him on key issues that impact our state," he said.

Print Headline: 'Need to have time' on private option