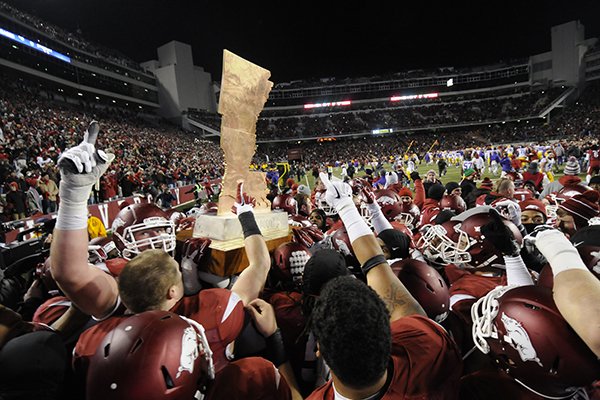 FAYETTEVILLE — Arkansas' long Southeastern Conference losing streak is over and the Razorbacks have a trophy to prove it.

Jonathan Williams and Alex Collins each ran for touchdowns, and Arkansas' defense recorded its first shutout in eight years in a 17-0 win over No. 20 LSU Saturday at Razorback Stadium. The Razorbacks snapped a 17-game SEC losing streak, winning their first conference game since 2012.

Arkansas (5-5, 1-5 SEC) won the Golden Boot Trophy by beating LSU for the first time since 2010. The win was also the first in 14 conference games for second-year Razorbacks head coach Bret Bielema.

Arkansas dominated the Tigers with a defensive effort that will go down as one of the best in program history. The Razorbacks held LSU to only 123 yards of total offense and forced a turnover after LSU had moved inside Arkansas' red zone midway through the fourth quarter.

Tigers quarterback Anthony Jennings, who came off the bench to engineer a last-minute touchdown drive to beat Arkansas last season, was under pressure all night. Arkansas sacked Jennings four times and held him to just 87 passing yards.

LSU (7-4, 3-4) twice had chances to cut into the Razorbacks' lead, but kicker Colby Delahoussaye, who had missed only once all season entering the game, missed two field goal attempts from 27 and 47 yards. Prior to Saturday, the Tigers had not lost back-to-back games since 2008.

The win was a culmination of a season worth of frustration for the Razorbacks, who had lost five games to teams ranked in the top 10. Arkansas lost three of those games - to Texas A&M, Alabama and Mississippi State - by seven points or less, blowing a fourth quarter lead in all of them.

The Razorbacks took the lead against LSU on a 32-yard field goal by Adam McFain early in the first quarter. Williams added a 1-yard touchdown run with 8:40 left in the second quarter to give Arkansas a 10-0 halftime lead.

Collins' 5-yard touchdown run came with 11:03 remaining in the fourth quarter to cap the scoring.

The shutout was Arkansas' first since a 20-0 win over Utah State in 2006. It was the Razorbacks' first shutout in a SEC game since beating South Carolina 23-0 in 2002.

LSU had not been shut out since the 2011 BCS National Championship Game against Alabama.

The temperature at the start of Saturday's game was 33 degrees, making it the coldest in Fayetteville since 1995. Despite below-freezing temperatures for much of the game, the majority of an announced crowd of 70,165 stayed until the end.

Thousands of Arkansas fans rushed the field after the game ended. The university could face up to a $25,000 fine from the SEC office as a result of fans entering the playing surface.

Arkansas will host No. 10 Ole Miss next Saturday in Fayetteville. The Razorbacks would become bowl eligible with a win against the Rebels or in their season finale against Missouri the following week.