Giving is both job and joy for Hot Springs philanthropist 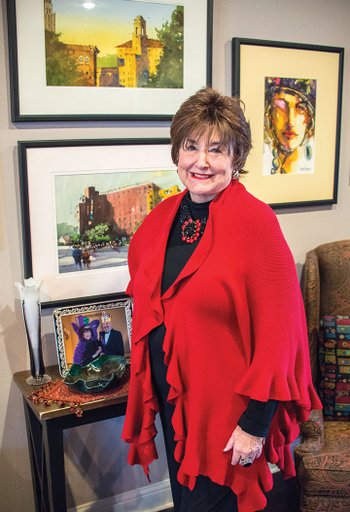 Dorothy Morris stands in front of some the artwork that she loves and collects from local artists in Hot Springs. Morris heads the philanthropic foundation that carries her last name and received an award at Hot Springs High School on Thursday related to her giving.

Dorothy Morris said she has written in her journal every day since she was 13. On Thursday, she said she would write about being given a wonderful gift at Hot Springs High School.

“Several years ago, a young dancer won a scholarship from the Thea Foundation and studied dance around the world,” Dorothy said. “She now teaches dance to some 300 students at Hot Springs High School. Some of her students did not have the money for dance shoes and other equipment, and Paul Leopoulos of the foundation asked if I could help.

“I gave them $3,500, and others also gave money, and today the students danced for us, and they were brilliant. They gave us notebooks, and the teachers and students wrote letters thanking us for helping. It was a touching morning and for a minimum investment. This is why I love my job.”

Morris said she provides seed money for good ideas to grow. She is a great patron of the arts in Arkansas, sponsoring Arkansas Symphony Orchestra performances in Hot Springs for schoolchildren in the region. She also promotes artistic talent of any kind, from young singers trying out for the national audition for the Metropolitan Opera to young dancers needing shoes.

She is president of the Morris Foundation, which gives back to her community by providing support for culture in Arkansas. The foundation has invested more than $1 million for nonprofit projects and organizations in the state, including Garvan Woodland Gardens, the Arkansas Rice Depot and the Hot Springs Documentary Film Festival, to name a few.

She is also the co-founder, with shoe manufacturer Don Munro, of the Hot Springs Giving Circle, a group that offers support through grants for local projects in Garland County.

“We have given more than a half-million dollars since our inception in 2007,” Morris said. “We meet about three times a year and look for worthy projects. I love it; it’s fun.”

Morris is an Emmy winner for a public-television show about a project by Linda Palmer to create pictures of the Champion Trees in Arkansas with paint or colored pencil. Palmer, who is a local artist and a member of the Hot Springs Giving Circle, traveled around the state, often with Morris, to look at the oldest or largest tree of a species found in the state.

“Traveling with Dorothy is always fun,” Palmer said several months ago. “She is larger than life and a joy to be around. We were talking once that we ought to make a film about the trees and the art, and she said, ‘I’ll pay for it and find the people to do it.’”

Even Morris called herself “a dash of Auntie Mame and Glinda the Good Witch” with an excitement and zest for the adventure of life that is infectious.

“It seemed I was always giving. I learned it at church,” she said. “My husband, Walter, helped me, and I took to it like a duck to water. It is the most exciting job.”

During a conversation with Morris, it is not unusual to find out she is in New York, Kansas City or even Europe, but she is always from and of Arkansas.

Morris was born in Bismarck, one of four children of Eunice and Doyle Looper. Her father worked laying roads for the Arkansas Highway and Transportation Department. When Morris was about 5, her mother started fainting frequently and falling down. It took several years to determine that Eunice had multiple sclerosis. She was in a wheelchair for the rest of her life.

Morris’ father loved to sing and play his 1930 Martin guitar. After he died, the guitar was passed back and forth between Morris and her sister, Mary Margaret Causbie, who both thought they would take guitar lessons. Morris has it now, and she has wanted to have it restored.

Morris never learned to play, but she always loved music, and trips to Ouachita Baptist University brought her into contact with classical music.

The family moved to Malvern, and Morris graduated from Malvern High School in 1960. She worked at the Totem Pole gift shop on U.S. 67 in Malvern for several years, selling moccasins and American Indian souvenirs to tourists.

“Then I moved to Big D,” she said. “I took some courses at [Southern Methodist University], but I went to work for the Southland Corp., which started the 7-Elevens around the South. I was a secretary. This was the days of carbon paper, and I would type pages and pages of numbers without a mistake.”

In Dallas, she met Sam Geeteh, a successful Dallas businessman who owned a dry-cleaning-chemical company. They married in 1969 when she was 27.

Geeteh developed diabetes and heart problems and died in 1979. Morris sold real estate during the boom years of the 1980s and then moved back to Arkansas in 1985.

“My sister Katherine became ill,” Morris said. “She was the one looking after my parents, and they were getting older. I moved to Little Rock to be closer.”

Morris said she rented an apartment at Quapaw Towers in downtown Little Rock. One evening, she was taking her niece to the building’s swimming pool when she ran into Walter Morris. She started chatting with the New Yorker.

She said Walter was a king of Wall Street, an investment banker who had made his fortune and had become a philanthropist. He moved to Arkansas to serve on the board of Heifer International.

The two became good friends, and it took him a year to talk her into marrying him. The two wed in 1988.

“He was the most wonderful person I ever met,” Morris said. “He was compassionate and kind. He did not care about material things. He had shoes that were so old I was embarrassed to be seen with him, and his hair was long. I cut it myself.”

After they married, Dorothy and Walter devoted their time to the Morris Foundation.

“Our whole world was the foundation,” Dorothy said. “We were on boards. We gave money. We lived for our foundation.”

The couple moved to Hot Springs in 1996. He worked on the foundation until the day he had a stroke in March 1999. He died two weeks later.

She built a chapel in his honor — Morris Chapel — on a cliff near the confluence of the Caddo River, Cox Creek and DeGray Lake. The brochure for the chapel includes a version of The Serenity Prayer, a prayer credited to Walter’s friend, theologian Reinhold Niebuhr.

Dorothy said she has no intention of retiring but plans on giving away the funds of the foundation in 10 years.

She said she seems to be winding up some of the major projects she has worked on for years, including the film on the Champion Trees, but she said she has an even bigger project in mind.