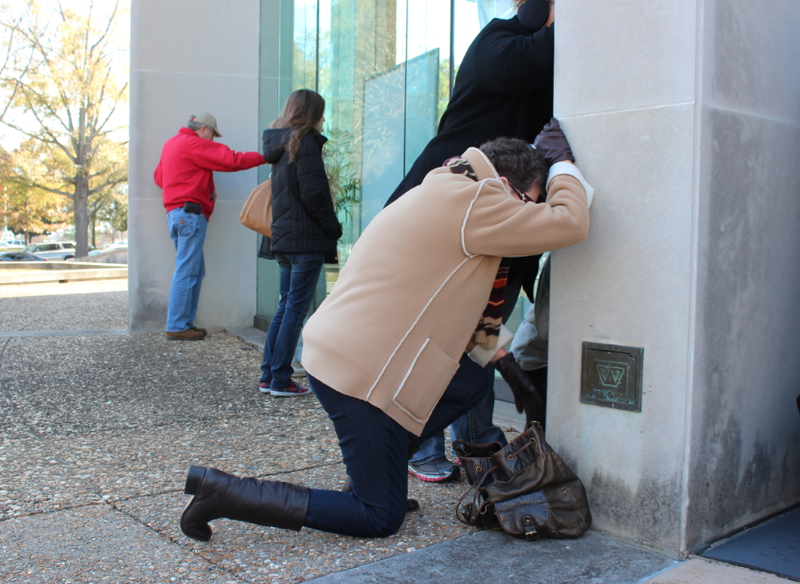 Barbara Matchett of Vilonia joins other opponents of gay marriage Wednesday in prayer outside the Arkansas Supreme Court.

Supporters of a 2004 ballot measure that defined marriage in Arkansas as being between one man and one woman rallied Wednesday outside the state Capitol, urging the state's high court not to allow gay marriages, a day before oral arguments on the subject are scheduled.

About 300 people, most against gay marriage but some there to voice support for it, first gathered on the Capitol steps and listened as Family Council Director Jerry Cox, FRC Action Executive Director Josh Duggar and others asked the court not to reverse the 2004 vote. Then many in attendance marched to the Arkansas Supreme Court on the Capitol grounds, where they bowed their heads or kneeled in prayer.

The court on Thursday is set to hear oral arguments on an appeal of Pulaski County Circuit Judge Chris Piazza's ruling earlier this year that allowed same-sex unions in the state for several days until the high court issued a stay. A federal hearing in U.S. District Court on gay marriage is also set for Thursday.

Duggar, the oldest child of the Tontitown family featured in the TLC reality show 19 Kids and Counting, said America's strong economy is linked to its strong families and strong faith, adding that there is an "agenda to silence us, to silence those of us who believe in what is right."

"Let me tell you, they're taking away your right to speak," he said. "And I call on the Arkansas Supreme Court to stand with the people and to honor their vote."

Afterward, Cox acknowledged several recent rulings in other parts of the country had come down in favor of gay marriage, and he said he thinks defending marriage as an exclusively heterosexual privilege it is an "uphill battle."

"The courts have tilted the field the other direction," he said. "Every time the people have had the chance to vote on marriage, almost every time, they define it as the union of a man and a woman. But when the courts get involved, it's almost like referees running onto the field saying, 'Let's change the score, we don't like the outcome.' That's what the people today are concerned about is judicial activism. We need to put a stop to that if we can."

Some at the rally voiced support for gay marriage, including Pastor Randy Eddy-McCain of Open Door Community Church in Sherwood. Eddy-McCain carried a sign reading "Christian Pastors for Marriage Equality," which he held up behind the speakers after organizers invited pastors to stand in the area.

Eddy-McCain said a man told him a short time later that he had to leave but he declined and stayed in place. A woman holding a sign in favor of heterosexual-only marriages then stood in front of him.

"I understand it, I grew up in Arkansas and I understand some of the thought processes," he said. "But as a person who is a pastor who has seen many gay/lesbian couples that are followers of Jesus ... we felt like we needed to be a voice for them."

See tomorrow's Arkansas Democrat-Gazette for more on this story. 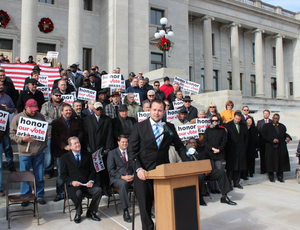 Photo by Gavin Lesnick
FILE — Josh Duggar speaks at a rally at the state Capitol to urge the Arkansas Supreme Court not to uphold a ruling that allowed gay marriage in the state in this 2014 file photo.
ADVERTISEMENT