Brushing up on history 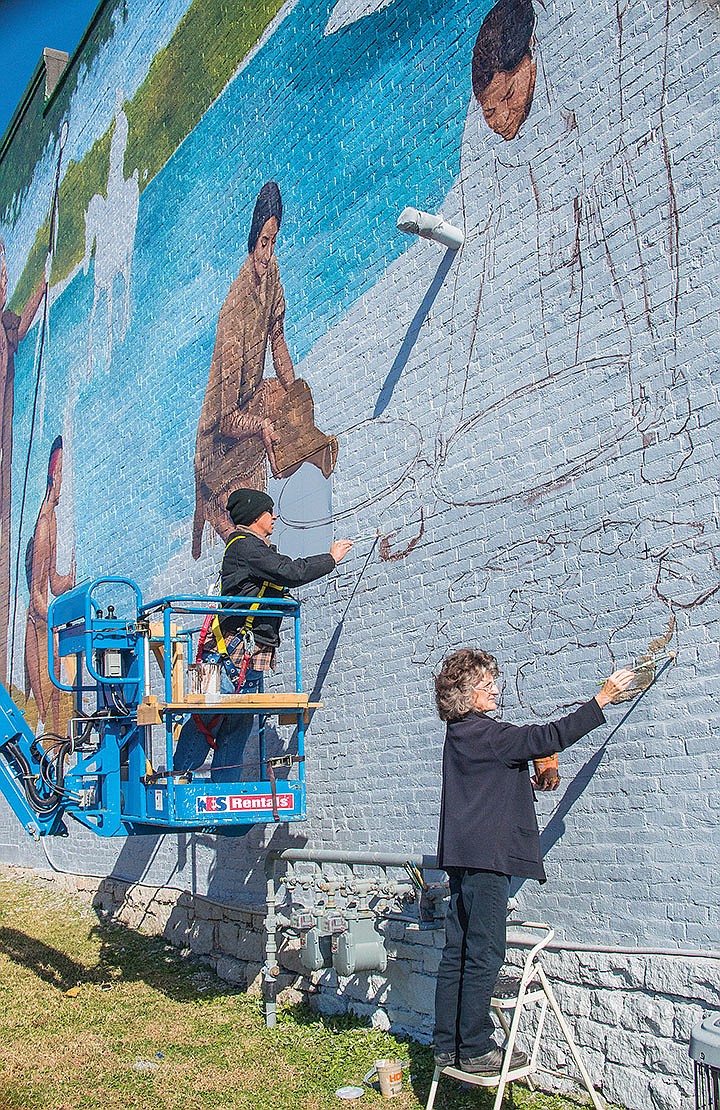 Mark Davey, left, uses a cherry picker to attain a high position as Dianne Roberts works near ground level on a mural that will depict the history of the Saline County area on this formerly blank wall of the Bell Building in downtown Benton.

History is in the making at the corner of South and Main streets in downtown Benton.

Artists Dianne Roberts of Benton and Mark Davey of Arlington, Tennessee, are painting a mural on the west side of what is referred to locally as “The Bell Building.” Roberts, who has been working on the mural for at least 1 1/2 years, said this is the first outdoor mural that has been painted in a public spot in Benton.

The mural is a timeline of Benton’s history.

Roberts said the idea for the mural came from a conversation between Freddy Burton, who is leading the efforts to raise $40,000 for the project, and Arlene Rainey, who, at 98, has been a strong supporter of the community for many years. The project is managed by the Gann Museum of Saline County and headed by Burton; Rainey is a member of the museum’s board of directors. Roberts has supported the museum as a volunteer.

“We had been in a meeting and were talking,” Burton said, “and Arlene said, ‘Every time I look at this corner and see that blank wall, it just screams, ‘Put something on me.’

“That just set a spark off in me, and I got with John [Young, the current owner of the building],” Burton said. “We got with Dianne, and the project was off and running. This would not have happened without Arlene, … without Dianne. I just passed the baton off to Dianne, who then found Mark, who, I believe, is the best artist we could have ever found.”

Burton said the fundraising campaign has gone “very smoothly, but we still lack about $5,000. We’ll get it. I know we will,” he said. “We are still taking donations.”

The mural’s story of Benton’s history begins with the 1400s when Native Americans inhabited the area and ends in 1900 when the trains were in their heyday and pottery was a thriving industry. Central to this timeline is the Saline River, which brought people to the area and was one reason why they stayed; the river is depicted in the background of the mural.

Roberts readily admits that many parts of Benton’s history are not represented on the mural.

“It’s about everyday people,” Roberts said. “It’s about how they lived and worked, even though other things were going on around them (slavery, the Civil War, the Trail of Tears). It’s just about hardworking people.

“It’s like taking pictures of your children,” she said. “You don’t want to show the bad times; you just want to showcase the good times.”

Among these hardworking people were the Native Americans (primarily Caddo and Quapaw) who inhabited the area as early as the 1400s.

Roberts said she did a lot of research on these early settlers, conferring with Mary Beth Trubitt, who teaches courses in archaeology and North American Indians, among other subjects, at Henderson State University. Roberts has even had discussions with representatives of the Caddo Nation in Oklahoma City.

“I wanted these figures to be as accurate as possible,” Roberts said, noting that all of the figures on the mural are painted from photographs she and Davey have taken of local people dressed in period costumes. Many of the costumes came from the wardrobe closets of the Royal Theater.

Four Caddo figures highlight the beginning of the timeline depicted by Roberts and Davey.

Davey, who has been painting murals for about 20 years, works up high on the mural, using a boom lift. Roberts, who taught art in public schools for many years and now operates her own art studio in a building across the street from the mural site, usually works down low, painting scenes that are closer to the ground.

Roberts said the Native Americans lived and hunted along the Saline River.

“They also learned to make salt,” she said, noting that salt and timber were two of Benton’s most valuable resources in the late 1800s. Both of those industries are represented on the mural.

Farmers are also represented on the mural.

Another thriving industry in Benton in the late 1800s was pottery.

“We had 13 potteries here,” Roberts said.

The last figure featured prominently on the mural is that of Charles Hyten, founder of Niloak Pottery.

Arlene Rainey is the daughter of Hyten.

“Arlene didn’t ask for this to be included in the mural,” she said, “but pottery was one of the main industries here, and Mr. Hyten was the founder of one of the best-known potteries here. Niloak is well known and sold all over the world.”

Roberts said bauxite was also a main industry in the area.

“But that’s a whole other story,” she said with a laugh. “Bauxite could be the subject of the next mural.”

With the Saline River in the background, Roberts also has shown forms of transportation.

At the top of the mural, the viewers will see Hernando de Soto, crossing the river with his men on horseback as they explored the area in the 1500s. Next comes a ferry that was built to transport people across the Saline River, then a bridge that was built to replace the ferry. The final form of transportation shown on the mural is a train, which, Roberts said, is an engine and passenger car representing the St. Louis, Iron Mountain and Southern Railroad before it became the Missouri Pacific Railroad.

“Dianne is such a historian,” Burton said with a smile. “She has done so much research to ensure that everything represented on that mural is as historically correct as it can be.”

Roberts, Burton and, occasionally, Rainey traveled all over Arkansas looking at cities and parks that had outdoor murals.

“This is different from anything that we saw,” Burton said. Davey said the mural measures 31 feet tall and 141 feet long.

“It’s over 4,000 square feet,” he said, adding that the wall is masonry brick that had to be repointed and primed before he and Roberts could begin the painting process.

Davey and Roberts are using acrylic paint and will add a clear-coat finish to the mural in hopes of making the colors last longer.

“I hope we have it finished by the second week in December,” Davey said.

“This has been a community project,” Burton said. “The enthusiasm has been great.

“I’ve had several people tell me they drive by it in the morning and look forward to driving by it in the afternoon to see what has been done in a day’s time. For some people, this just rings a bell with them.

“It’s been an easy project. Everything has just fallen into place.”