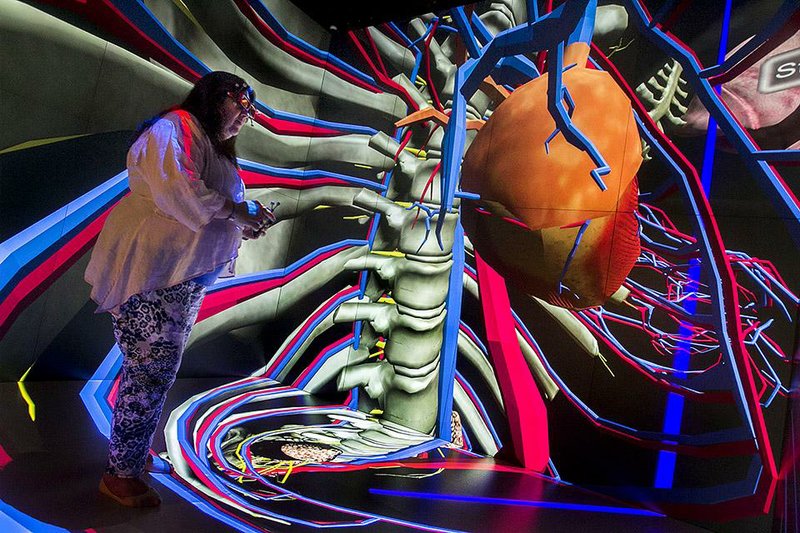 Recently hired as director of the Emerging Analytics Center at the University of Arkansas at Little Rock, Cruz-Neira completed her doctoral dissertation in 1995. The dissertation centered on developing a virtual reality facility, technology that she co-invented.

Since then she has worked on improving the technology at centers in Iowa, Louisiana and Arkansas.

The showpiece of the Emerging Analytics Center at UALR is the virtual reality room. It has 26 computer monitors integrated into the walls of a single room, with the capability of projecting a lifelike, three-dimensional scene onto the monitors that can give an individual the sense of being transported to another environment.

Cruz-Neira compares it to the "holodeck" on the Star Trek: The Next Generation television show, which was a simulated reality platform that crew members use for entertainment.

On a recent visit, she demonstrated the technology, first projecting a larger-than-life view inside the human body, showing the spine and organs. Then she projected a street scene with people inside buildings and walking along the street.

The internal view of the body was an enlargement of an MRI that pinpointed an inflamed disc in a spine, something that may not have been visible on a normal MRI.

"Here it is pretty obvious and you can see exactly which one [is inflamed]," Cruz-Neira said.

Cruz-Neira earned her master's degree and doctorate in electrical engineering and computer science from the University of Illinois at Chicago.

The technology has been at UALR since 2013, when the center opened and was led by Mary Good, former dean of UALR's College of Engineering and Information Technology. Good is now a special assistant to UALR Chancellor Joel Anderson.

Cruz-Neira is refining the technology to make it mobile and said she has found a way to display the same technology on a computer or a cellphone.

"This was first designed for people to come [to UALR] to do work, but realistically that is not always possible," Cruz-Neira said. "There are a lot of activities, especially for industry, that they need to do on-site. Many industries may not be able to bring their customers here. They may have to be in a position to take the technology to the customers."

Doctors at the University of Arkansas for Medical Sciences are benefiting from the mobile technology, said Dr. T. Glenn Pait, professor of neurosurgery and orthopedics and director of the Jackson T. Stephens Spine & Neurosciences Institute at UAMS.

The technology will be good for Little Rock and other universities in the state, Pait said.

"It will have the impact of more people coming here at the Stephens Institute," Pait said. "To have this in Arkansas and have [Cruz-Neira] here is just incredible."

The UALR Emerging Analytics Center is the third similar center that Cruz-Neira has been hired to expand. The first was in the late 1990s at Iowa State University. There were fewer than five faculty members in the program when Cruz-Neira joined and there were 50 faculty members and 250 research students when she left in 2006.

Next, Cruz-Neira was hired as the founding chief executive officer and first employee at the Louisiana Immersive Technologies Enterprise in Lafayette, La. The program wasn't part of the University of Louisiana-Lafayette, but was a state funded institution, Cruz-Neira said.

By the time she left this year, there were 30 employees doing applied research at the center, Cruz-Neira said.

She has 11 people, including faculty, researchers and students, who work at the UALR Emerging Analytics Center. She expects to hire five to seven new workers within the next six months, she said.

The applications for the technology are endless, Cruz-Neira said in a recent report by the Arkansas Research Alliance.

The center will work with many industries in Arkansas, such as construction, architecture, retailing and horticulture, Cruz-Neira said.

"She has an extraordinary amount of connections internationally and nationally," said Jerry Adams, chief executive officer of the Arkansas Research Alliance. "She's not a flash in the pan. This is going to allow UAMS to be able to do some things they've not been able to do."

How big the program at UALR can become will be dependent on the economy, she said. It typically takes three to five years to begin to see major results, she said.

"What limits what we can do is how far we can think, our imaginations," Cruz-Neira said. "If you can think about something, no matter how challenging, we should be able to make it happen."