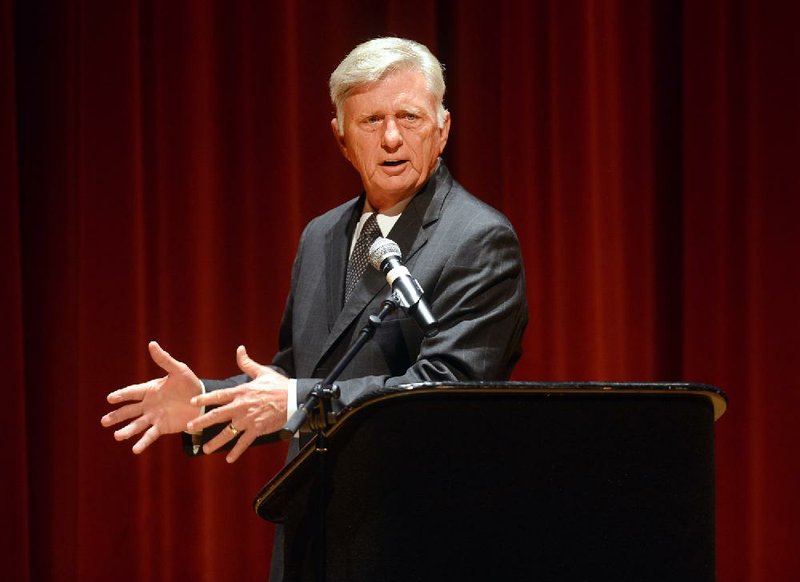 Arkansas Gov. Mike Beebe said Tuesday that he plans to present two budgets next month to legislators -- one that plans for $50 million in tax cuts scheduled to go into effect in July and one that recommends that those cuts be delayed.

With stagnant state revenue and a ban on deficit spending, lawmakers don't have enough money to cut taxes, Beebe said.

And that's before setting aside money for a new $100 million prison or additional tax cuts, which have been proposed by Republican gubernatorial candidate, Asa Hutchinson, and his Democratic opponent, Mike Ross.

A joint legislative committee began budget hearings Tuesday in preparation for the 2015 legislative session that will start Jan. 12.

The hearings began with fiscal 2016 budget requests from boards and commissions, many of them funded through license fees and fines, but lawmakers noted that expected demands for increased prison funding and increased kindergarten-through-12th-grade education funding are already on their radar.

"There is going to be a lot of demand for prisons both for construction and for operations, but they've got a problem that they have to address first, actually they've got two problems," Beebe said in an interview. "Two years ago when they passed all those tax cuts, I said they could afford $100 million not $150 [million], and they delayed that last $50 [million] to take effect in July of 2015 for fiscal 2016, so that would be the budget we're talking about. If they don't delay that, they've got a huge hole in the budget and serious, serious problems."

In 2013, the Legislature passed a series of incremental tax cuts that added up to about $140 million -- about $84 million that went into effect this year and another $56 million scheduled to go into effect in July.

Beebe said the anticipated hole is what inspired his plan to submit two budgets to legislators at a hearing scheduled for Nov. 13.

"I'm going to present them two, and that normally isn't done," he said.

Beebe, who leaves office in January because of term limits, will not get the final say on next year's budget. The incoming governor will also submit recommendations and a review of agency budget requests in November.

Mike Ross and Hutchinson have been promoting differing tax cut plans. But Beebe said whoever wins will have to consider whether the state's revenue numbers will allow for the scheduled cuts as well as any additional cuts.

"You know, I'll be gone, but I still have an obligation to make sure whoever comes next and whatever happens next is done in a sound fundamental way," he said.

Legislative leaders said Tuesday that they had heard about Beebe's plans to submit more than one budget proposal, but weren't aware of the details yet.

Sen. Larry Teague, D- Nashville, the current chairman of the Joint Budget Committee, said he doesn't think there would be much support for delaying the July cuts.

"I can't see there being any momentum to put that off," he said. "I just think those cuts hadn't come in yet and those authors are proud of what they did and anxious for that to happen. And some of the [tax cuts], most of them, were probably cuts that were worth doing. I don't see us taking them back, but I've been wrong before."

Rep. Jeremy Gillam, R-Judsonia, who will take over as House speaker in January, said he had heard that Beebe was thinking of submitting more than one budget proposal.

"I didn't know if that was something that was definitely going to happen. I think we were in wait-and-see mode," he said. "I think there's some wisdom in that, in giving a couple different options and paths to go down for the members. I haven't seen any support for that yet, but I think there's absolutely no harm in taking a look at what that would look like."

In addition to the about $50 million in scheduled tax cuts, Beebe said the Legislature would be facing an additional $100 million gap if the state's private-option Medicaid expansion plan isn't funded.

Beebe also warned of that funding gap if the plan hadn't been funded in this year's fiscal legislative session, when the program faced increased opposition in a heated election year in both chambers. Securing funding for the private option, which requires super-majority approval of three-fourths of members in both chambers, took haggling, compromise and five formal votes in the House before it passed.

The program extends insurance coverage to adults with incomes of up to 138 percent of the poverty level -- $16,105 for an individual or $32,913 for a family of four. More than 170,000 Arkansans have enrolled in private health insurance through the program.

Ross has said he would support the private option, while Hutchinson has not taken a firm stand on continuing the program.

Gillam said he believes upcoming reports on the progress, cost and coverage of the insurance plans will make the conversation easier in January.

Teague said he doesn't expect any fighting in the preliminary budget hearings because the goal is to build a base of legislation to work on in the session. He said he has other worries, however.

"I don't think there will be a fight, but there will be some hard decisions if there's less revenue," he said. "I continue to hear that we expect to have less money in the coming year, or at least have a deficit based on current spending levels. Now I haven't gotten that officially, that's just what I hear from people. That would be the first time in a long time if that is the case."

Gillam said he believed from the first day of hearings that responsible funding requests were being made, citing a few decreased requests from the boards and commissions that were presented Tuesday.

"We're looking at this thing very cautiously. We're not going to jump out and go into a whole bunch of increased appropriations knowing that our picture on the sales-and-use [tax] side of things at least is down from where we had hoped it would be at this point," he said.

The board of corrections voted earlier this year to request funding to build a $100 million prison to deal with overcrowding. And, while the major agencies won't present their funding requests until after the Nov. 4 election, Beebe and others said they anticipate a request for additional operating money for prisons, as well.

In addition, the state is looking at a $65 million gap in funding requests for K-12 school facilities. No formal request for increased funding had been approved by the Division of Public Schools Academic Facilities and Transportation as of Tuesday.