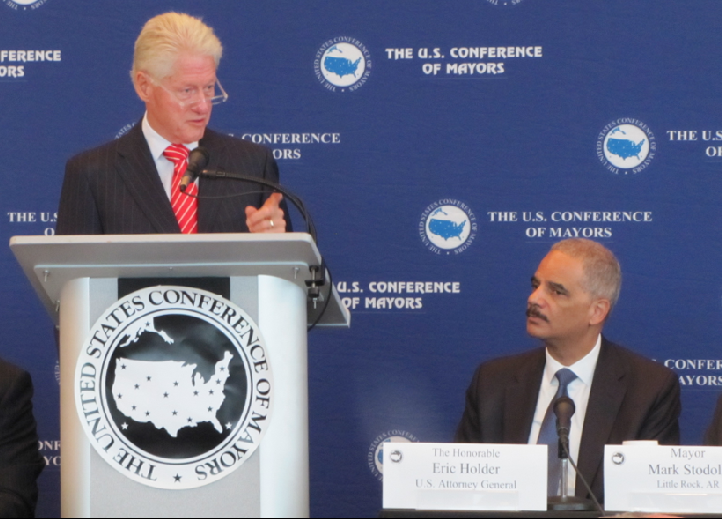 U.S. Attorney General Eric Holder said Wednesday that communities must work to address tensions that exist between residents and police to avoid situations like the riots that occurred in Ferguson, Mo., after a black teen was fatally shot by a white officer.

Holder joined former President Bill Clinton in speaking at the Clinton Presidential Center to the United States Conference of Mayors, a two-day gathering of police chiefs and mayors from around the country that marks the 20th anniversary of the Community Oriented Policing Services, or COPS, program. The program, established under Clinton's administration, added 100,000 police officers and placed an emphasis on officers becoming better connected with their communities.

Holder noted that the program's implementation roughly mirrored a huge decline in violent crime across the country.

Holder said the COPS program and others like it will be key to addressing "longstanding tensions" that exist in communities and came to a head in Ferguson.

"The events in Ferguson reminded us that we cannot and we must not allow tensions which are present in so many neighborhoods across America to go unresolved," Holder said. "With this gathering of leaders, thanks to the promise of community policing, we are declaring together that we will not."

Clinton, who took the stage shortly after Holder, recalled how the community policing effort formed in 1994 as a way to address a violent crime rate that in the previous 30 years had tripled, while the police force had only increased 10 percent. Community policing put an emphasis on placing officers on the street and establishing relationships with community members.

"The idea was to enable people like you to change the way you related to the community," Clinton told the group. "And that physical presence, that trust and relationships would create an environment that would reduce the number of crimes that would be committed in the first place as well as to enable you to solve them as quickly as possible with a minimum amount of violence and a maximum amount of cooperation."

The strategy works, Clinton said, noting a citizen was killed by police in Los Angeles shortly after the Aug. 9 shooting in Ferguson and "things went back to normal pretty quickly because of the aggressive community relations strategy that had been instituted and was implemented."

"Look, if we all live long enough and have responsibilities, we'll all make mistakes. Tragedies will happen. People will do bad things," Clinton said. "And the question is how are we going to relate to each other? How are we going to work through these things? What happens when something goes wrong?"

As officials work to "deal with the tragedy of what happened in Ferguson," law enforcement around the country need to strive to be inclusive and representative of their communities, Clinton added.

Several dozen police chiefs and mayors from around the country attended the conference, and many of them stood up after Holder's speech, speaking to him and acknowledging his work. Among them was St. Louis Mayor Francis G. Slay, who thanked Holder for coming to Ferguson in the days after the police shooting in the St. Louis suburb.

After the meeting the mayors are to develop a plan that can be used to help prevent situations like the one in Ferguson and present it to the U.S. Department of Justice.

See Thursday's Arkansas Democrat-Gazette for more on this story. 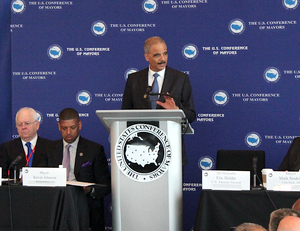 Some information for this story was contributed by the Associated Press.