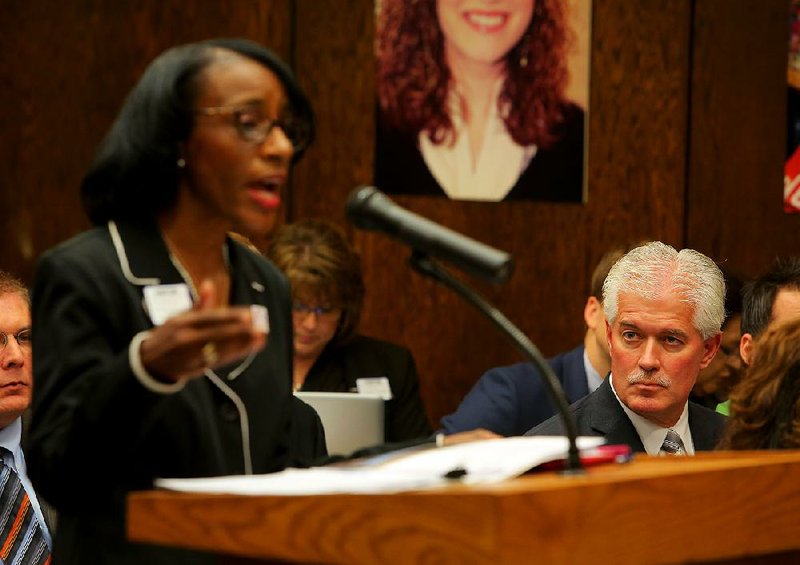 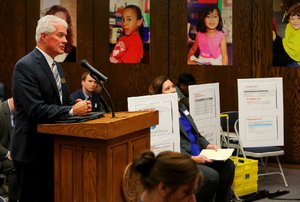 Photo by Stephen B. Thornton
North Little Rock School District Superintendent Kelly Rodgers speaks Wednesday against establishing a Lighthouse Academies independent charter school in the city. Beside him was a series of charts that the district provided to try to show the academies’ poor performance.

However, the state panel unanimously denied a request for a Bentonville-based online charter school that would have served kindergarten through 12th-grade students statewide.

The panel gave the go-ahead for the expansion of two of the state's highest-performing charter schools: KIPP Delta and Haas Hall Academy.

The KIPP Forrest City College Preparatory School -- which the panel unanimously approved Wednesday -- is expected to draw 1,500 fifth-through-eighth-grade students. The new campus will operate under the umbrella of the existing KIPP Delta Inc. charter, which already operates schools in Helena-West Helena and Blytheville.

KIPP, which stands for the Knowledge Is Power Program, is a national charter school organization. The chairman of the board of directors for KIPP's Arkansas schools is Randy Zook, president of the Arkansas State Chamber of Commerce and husband of state Board of Education member Diane Zook.

The authorizing panel approved by a 3-1 vote -- with panelist Eric Saunders dissenting -- the opening of a proposed 500-student Bentonville campus of Haas Hall Academy for grades seven through 12.

Martin Schoppmeyer Jr., founder and chief operating officer of The Academy Inc., told the panel that the new campus would follow the same principles and accelerated, college-preparatory curriculum as the group's high-performing Haas Hall Academy in Fayetteville.

Kathy Smith, senior program officer for the Walton Family Foundation's Arkansas Education Reform Initiative, told the panel that while Bentonville has strong and successful public schools, Haas Hall Academy would provide another "quality option, in my view, that parents around Bentonville can utilize."

Sen. Bart Hester, R-Cave Springs, told the panel that the Fayetteville campus "absolutely produces results" and that a Bentonville school would be a welcome addition to the community.

"The No. 1 reason is they have a culture of excellence," Hester said.

Panelist Debbie Jones questioned what the school would do to encourage a balanced student body in terms of minority groups and those below the poverty level.

Schoppmeyer said enrollment is open to all students regardless of race, class or disability. He added that the school's lottery system for filling vacant spots could be reviewed at any time.

Saunders inquired about the number of disabled students and English language-learning students at the Fayetteville campus.

Schoppmeyer replied that there are several "504 scholars" attending the school, but there were no disabled students. A 504 plan is a legal document under the federal Rehabilitation Act of 1973 that requires school districts to map out a program of instructional services for special-needs children who are in a regular classroom setting.

The panel also approved the request for Lighthouse Academies of Central Arkansas Inc. -- which currently has campuses in Jacksonville and Pine Bluff -- to open a North Little Rock school.

The approval of Capitol City Lighthouse Charter School comes after an unsuccessful attempt last year. The North Little Rock school is projected to host about 750 students in kindergarten through 12th grade.

North Little Rock School District Superintendent Kelly Rodgers opposed the proposed charter school, telling the board that the approval of the school would negatively affect the district financially. The district is about a third of the way into a planned $265.5 million capital improvement program, he said, adding that it will lose about $7.6 million a year in desegregation aid that will end after the 2017-18 school year and has been told by its financial adviser to shave $8.3 million off the district's annual budget.

"You have those and you start taking 200 to 300 kids out of the North Little Rock School District, the state might as well take us over financially because that's what's going to happen," Rodgers said.

The panel voted 3-1, with Jones dissenting, to approve the Lighthouse charter school application.

While the panel unanimously denied a request to establish Arkansas Connections Academy -- a proposed online charter school for 1,000 kindergarten-through-12th-grade students -- members voted to allow the group to resubmit the proposal next year.

In other business, the panel approved Northwest Arkansas Classical Academy's plan to phase in courses to meet the required 38 units of credit as the kindergarten-through-ninth-grade school in Bentonville adds additional grades up to grade 12.

The Charter Authorizing Panel will review proposals at 8:30 a.m. today for three other charter schools: Ozark Montessori Academy in Springdale, the Redfield Tri-County Charter School in Redfield and the Rockbridge Montessori School in Little Rock.