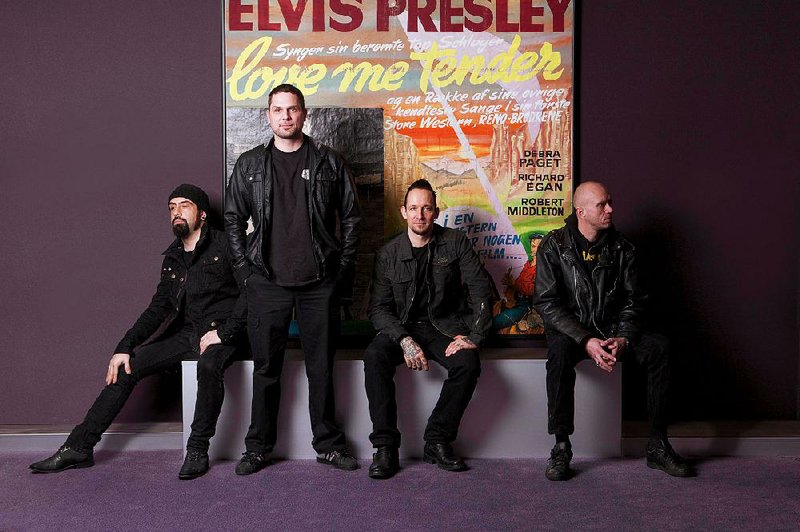 Denmark has more going on than large dogs and pastries. There's also loud rock 'n' roll -- at least the equal of our own homegrown hard rock.

Volbeat, for instance, a band from Copenhagen, is well versed in the art of noise, although the band's lead singer and rhythm guitarist, Michael Poulsen, started his career in Dominus, which he calls a "death metal" band. Poulsen felt more at home with a blend of heavy metal, rock 'n' roll and rockabilly, taking his inspiration from the likes of Johnny Cash and Elvis Presley.

"I grew up with parents who had a collection of records that leaned very heavily toward the Sun Records artists," Poulsen says from a stop on the road -- speaking in English, naturally, which he says is a widespread choice among Danes. "In school, most all of us kids learn Danish, plus English, French and German, although for me, English was the only one I mastered."

Starting in 2006, Volbeat began performing at some of Europe's most famous festivals, especially Denmark's own Roskilde, plus other gatherings in Switzerland and Poland.

"Our songs are all in English, of course, and we mostly do just our songs, but we'll do one cover each night, ranging from Hank Williams to Dusty Springfield and Johnny Cash, especially his 'Ring of Fire.'"

The band knows its way around America, he adds, with 15 or 16 American tours under members' collective belts. Metallica, especially, has chosen Volbeat as an opening act.

"We've probably done 20 shows with them, both in the U.S. and Europe," Poulsen says.

Poulsen formed Volbeat in 2001 with drummer Jon Larsen and bassist Anders Kjolholm. There has been a series of lead guitarists; the latest, Rob Caggiano, formerly of Anthrax, joined in 2013.

Volbeat has released five studio albums and one DVD. The group's latest album, Outlaw Gentlemen & Shady Ladies, released in April 2013, got a Grammy nomination for Best Metal Performance for the song "Room 24" and was named Album of the Year by Noisecreep, a fan site for heavy metal devotees. Noisecreep also named Volbeat the Artist of the Year.

Five Finger Death Punch, a Las Vegas band by way of Los Angeles, got together in 2005 and released The Way of the Fist, a debut album, two years later. Subsequent albums include War Is the Answer in 2009, American Capitalist in 2011 and The Wrong Side of Heaven and the Righteous Side of Hell, Volumes 1 and 2, both released in 2013. In August, the band made a video for the song "Wrong Side of Heaven," explaining that it concerned homeless veterans needing help for their post-traumatic stress disorders, depression and other problems after leaving the military.

Nothing More, from San Antonio, has released six albums since forming 11 years ago, the most recent of which, a self-titled disc, came out this year.