But that isn't saying much.

The best grade the Arkansas chapter of the American Society of Civil Engineers gave was a C+ in the bridges category, the same grade its national organization gave to the nation's bridges.

The other infrastructure in the state received D+ and D's, roughly the same or slightly better than the national infrastructure grades. Much of the report consisted of collecting and highlighting data from other reports. 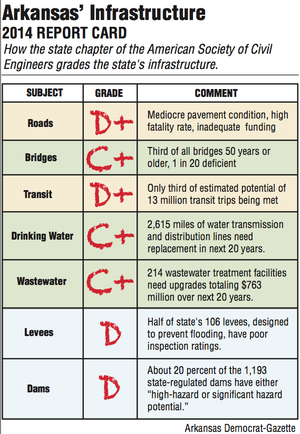 "I was surprised a little bit" by the mediocre grades, said Aaron Robinson, who is a regional governor for the state chapter and chairman of the committee that produced the state report card. "But I wasn't expecting all A's, either."

The 800-member state organization will release the 36-page report today as part of a keynote presentation at an 8 a.m. breakfast during its annual conference at the Wyndham Riverfront Hotel in North Little Rock.

Robinson, who is a project manager for Bond Consulting Engineers Inc. in Jacksonville, said he plans to see that the report is in the hands of the 135 members of the state Legislature before it convenes in January.

"We wanted to do [the report] to increase awareness among the general public and elected officials," he said in an interview. "We hope it will generate discussion and maybe lead to finding a way to address the funding shortfalls."

The national organization says infrastructure is not only vital to the nation's economy, security, recreation and safety, but it also has a direct effect on everything from the water people drink and the schools their children attend to the roads and rails the public travels.

The report uses the collective experience of the state's civil engineers, who also get paid to perform the work that they are recommending, to highlight "the needs of our community," Robinson said. "We live here. Our families live here. We drive on the roads. We sit in traffic."

The organization gave the state's roads a D+, which was a bit better than the D the nation's roadways earned.

The low grade for Arkansas came despite two major initiatives state voters approved in 2011 and 2012 -- renewal of a bond program designed to help pay for $1.2 billion in interstate improvements and a temporary half-percent sales tax over 10 years to help finance a $1.8 billion program targeting major noninterstate highways.

The report didn't include the half-percent sales tax initiative, dubbed Connecting Arkansas Program, because the report relied on data through 2012, Robinson said.

Even if the initiative was included, it wouldn't have made a material difference. That program will pay for work on just 656 miles of the state's more than 16,000 miles of roads, he said.

While the state has taken good care of the interstates in recent years, the pavement condition of other parts of the system are rated mediocre or poor. They include the national highway system, the Arkansas Primary Highway Network and the nonprimary highway network.

The financial outlook for highways also is uncertain. In Arkansas and elsewhere, revenue from fuel taxes is flat or declining, thanks to increased fuel efficiency in cars and trucks. On the federal level, Congress has been unable to reach an agreement on a long-term fix for the Highway Trust Fund, which doesn't have enough money to cover all the anticipated expenditures.

With the exception of the interstates and the national highway system in Arkansas, safety on state roads, although improving, remains poor, according to the report.

Robinson singled out the D+ that the state organization gave the state's drinking-water infrastructure for special concern.

"In order to sustain life, we have to have a clean, reliable source of drinking water," he said.

The pipes and other equipment in many state water systems are either old, too small or both, Robinson said.

The most pressing needs in the drinking-water distribution infrastructure are in medium-sized water systems serving between 3,301 people and 100,000 people, according to the report, which found "much drinking water infrastructure might be reaching the end of its useful life."

The report estimated the cost to be $6.1 billion over the next 20 years.

The report did highlight work at the state level to address the problem, which includes development of a 2014 Arkansas Water Plan by the Arkansas Natural Resources Commission.