Arkansas loses to No. 10 Georgia 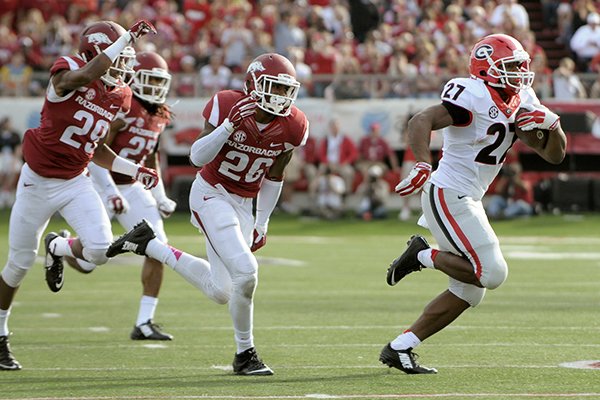 LITTLE ROCK — Arkansas played three solid quarters Saturday, but one lopsided one was the difference in another loss.

The Razorbacks gave up 31 points in the second quarter of a 45-32 loss to No. 10 Georgia at War Memorial Stadium. Arkansas lost its 16th consecutive SEC game in the same stadium the streak began two years ago.

One week after taking Alabama to the brink of an upset in Fayetteville, the Razorbacks looked one step behind for much of the game against the Bulldogs. Georgia amassed 250 yards of total offense in the first half, including 127 rushing yards by freshman running back Nick Chubb.

Starting his second straight game in place of suspended Heisman hopeful Todd Gurley, Chubb had touchdown runs of 43 and 3 yards in the second quarter. He finished the game with a career-high 202 yards rushing.

Arkansas kept the game close for much of the first half, but the Bulldogs scored three touchdowns during a 3 minute, 23 second span late in the second quarter to take command and leave the majority of 54,959 fans in stunned silence.

Chubb's second touchdown run extended the Georgia lead to 24-6 with 5:35 remaining before halftime. The Bulldogs recovered a fumble at the Arkansas 7 on the next offensive play to set up a touchdown pass from Huston Mason to Michael Bennett.

After driving the ball past midfield on the next drive, Arkansas quarterback Brandon Allen fumbled while being sacked. Dominick Sanders recovered the ball and ran it back for a 54-yard touchdown.

The Razorbacks tried to mount a second half comeback, scoring two touchdowns in the third quarter to cut the Bulldogs' lead in half. Allen had touchdown throws of 8 yards to Keon Hatcher and 4 yards to Hunter Henry in the quarter to pull Arkansas within 38-19.

Arkansas had a chance to cut further into the Bulldogs' lead early in the fourth quarter, but Allen was intercepted in his own territory by Damian Swann. Georgia scored three plays later on a 36-yard pass from Mason to Chris Conley to push the lead back out to 45-19.

Mason finished the game passing for 179 yards and 2 touchdowns. He also had a 1-yard rushing touchdown on the Bulldogs' first possession.

Arkansas added two touchdowns in the final 10 minutes, but failed to recover a pair of onside kicks. Allen threw a 4-yard touchdown pass to Kendrick Edwards and Alex Collins rushed for a 6-yard touchdown to cap the scoring.

Allen finished the game passing for a career-high 296 yards and 3 touchdowns. He was intercepted twice and committed three turnovers in all.

The Razorbacks out-gained the Bulldogs 422 to 387 in total offensive yards. Arkansas began the game with a 13-play, 75-yard drive capped by a 1-yard touchdown run by Alex Collins, but John Henson had an extra-point attempt blocked for the second consecutive game.

Collins finished with 31 yards and a pair of touchdowns. Jonathan Williams led the Razorbacks with 108 rushing yards on 18 carries.

Arkansas (3-4, 0-4 SEC) played one of its most undisciplined games of the year. The Razorbacks were flagged seven times for 79 yards and committed four turnovers.

Four of Arkansas' penalties were personal fouls, including a costly one against Tevin Mitchel in the second quarter. The Razorbacks' defense had stopped Georgia on a third down play, but Mitchel was called for a dead ball unsportsmanlike conduct penalty to allow the Bulldogs' drive to continue. Chubb capped the drive with his long touchdown run two plays later.

Arkansas linebacker Braylon Mitchell was also ejected from the game after being flagged for targeting in the second quarter.

The Razorbacks will play a nonconference game against UAB next Saturday at Razorback Stadium in Fayetteville.