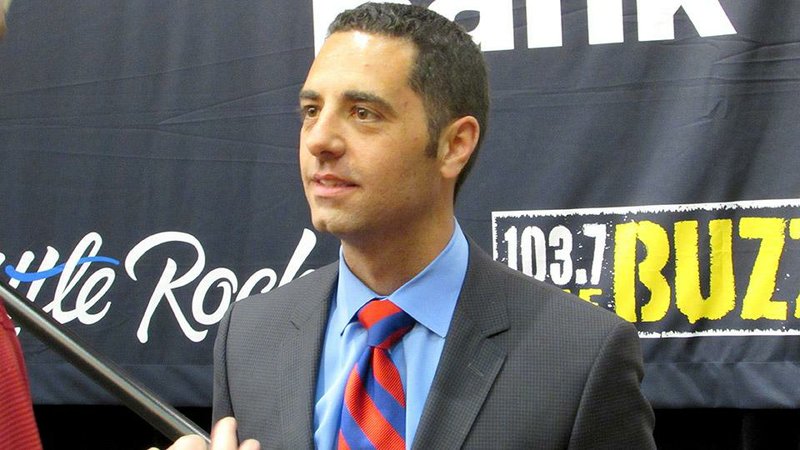 SEC Network commentator Dari Nowkah did his best to console Arkansas Razorbacks fans Monday when he spoke to members of the Little Rock Touchdown Club at the Embassy Suites Hotel.

Nowkah, 38, host of the SEC Network's nightly news show, SEC Now, as well as Saturday night's SEC Scoreboard, has had a front-row seat to the ups and downs of an Arkansas team that has been competitive despite seeing its SEC losing streak reach 16 games with Saturday's 45-32 loss to Georgia at War Memorial Stadium.

"I can't imagine the passion you guys have when I see the roller coaster you've been on," N0wkah said. "I can understand what you're feeling because I went on the air Saturday morning and said Arkansas would win by two touchdowns. I understand you didn't expect to win the West, but the thing about it is, you get up and go back at it again."

"My biggest thing to the fans is look where you were a year ago and look at the strides you're making," Nowkah said. "I don't think anyone at the start of the season would have thought Arkansas would have [Texas] A&M down by two touchdowns and have Alabama on the ropes. Keep things in perspective."

Arkansas (3-4, 0-3) is still struggling to improve off last year's 3-9 record, but Nowkah said it's important to remember last year when Arkansas was blown out 30-10 at Florida, 52-7 at home to South Carolina and 52-0 at Alabama on consecutive weeks.

A year ago, Arkansas was easily in the bottom third of all NCAA Division I FBS teams, Nowkah said.

Nowkah said Arkansas Coach Bret Bielema is not the problem.

"I have no question Bret Bielema knows what he's doing," Nowkah said. "Did you see how competitive you guys were Saturday when you outscored Georgia 26-7 in the second half? I have to believe you're going to get somebody and change the race in the SEC West."

When talking about the rest of the SEC. Nowkah said the biggest surprises are Mississippi State and Florida.

On the Bulldogs, who started the season unranked and are now No. 1 for the second consecutive week, Nowkah said at the beginning of the season he thought Mississippi State was a darkhorse, but didn't expect the Bulldogs to be competing for the championship.

When asked if he thought Gators Coach Will Muschamp would be fired, Nowkah said, "I hate to speculate on those things, but he's tied so much of his hope to quarterback Jeff Driskell and he's refused to move off of that. It's a matter of when and not if Muschamp gets fired."

Nowkah also discussed the status of Georgia running back Todd Gurley, who has been suspended while the school investigates whether he was paid $400 to sign 80 pieces of memorabilia on campus last spring. Nowkah said he favors student athletes receiving payment for helping their athletic programs be successful and if they help other businesses make money. However, he also said a line needs to be drawn, otherwise boosters will contact recruits and set them up with jobs while directing them to their schools.

With SEC teams winning seven consecutive national championships in 2006-2012 and having at least one team in each of the past eight BCS Championship Games, Nowkah said he understands anti-SEC sentiment from fans of other conferences. He compared it to the hatred many fans have for the Dallas Cowboys and the New York Yankees.

"If you don't like them, you root for their demise," he said. "You think they are are arrogant, selfish and overrated, but you still watch them."