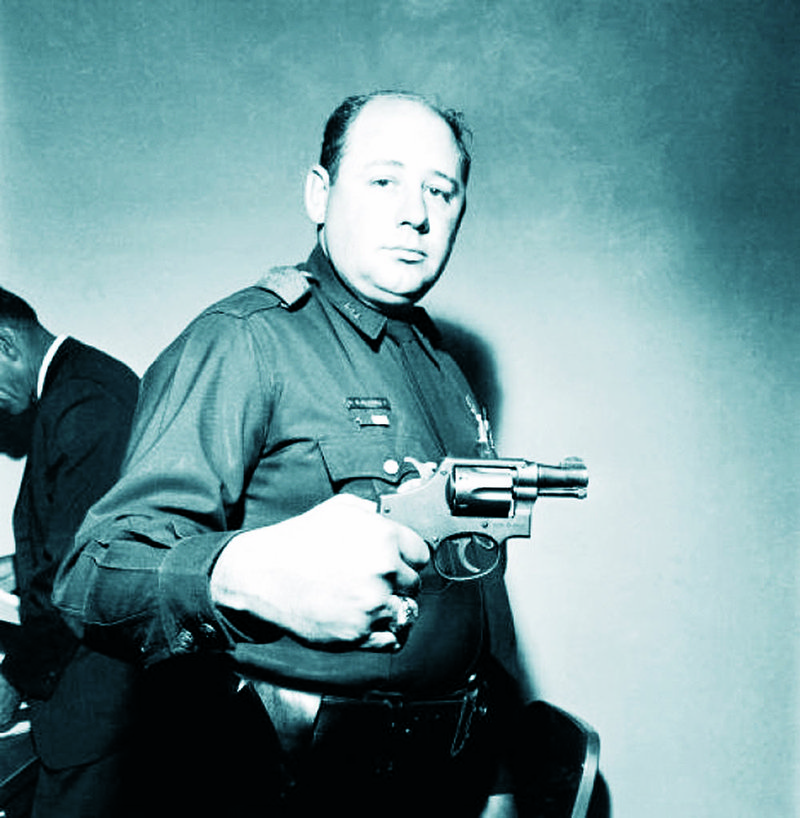 Above: Dallas police officer Maurice “Nick” McDonald displayed the gun he took during the arrest of Lee Harvey Oswald in Dallas, the day President John F. Kennedy was killed in 1963. The photo was taken the day after the assassination. McDonald moved to Hot Springs after he retired.

HOT SPRINGS — After almost 51 years, the details of the murder of President John F. Kennedy in Dallas on Nov. 22, 1963, remain a subject that fascinates Americans and still leads to all kinds of speculation.

“People are still talking about it, as interest during the 50th-anniversary year showed,” said Farris Rookstool III, an expert on the JFK assassination and a former FBI analyst. “Last year, there were television shows and books on the subject, and more will be coming.”

Rookstool, who spent nine years organizing the more than 500,000 pages of the FBI investigation into the assassination and who was part of a task force that declassified and opened much of the investigation for the public, was in Hot Springs last weekend to see one of his friends and a major figure in the story of the assassination who was being honored by the community.

Maurice “Nick” McDonald was one of four Arkansans honored Saturday with a plaque on the Arkansas Walk of Fame on Spring Street just off Central Avenue. McDonald was the Dallas police officer who arrested Lee Harvey Oswald at the Texas Theater just a few hours after the president was shot as his motorcade moved by Dealey Plaza in Dallas.

McDonald was born in Camden and moved to Hot Springs in 1980 after he retired from the Dallas Police Department. He died in 2005.

McDonald, who had been one of the officers called to the scene of the assassination but was removed to investigate the killing of Dallas patrolman J.D. Tippit, who the Warren Commission concluded was killed by Oswald as he was fleeing after shooting the president. Tippit was McDonald’s locker mate at police headquarters and a friend.

According to the commission’s investigation, witness Johnny Brewer saw someone who matched the description of the man wanted in connection with the shooting of Tippit entering the Texas Theater in Dallas. McDonald later testified that he talked with Brewer, and when McDonald entered the theater, the movie was stopped, and the houselights went up.

Thinking Oswald seemed about to surrender, McDonald asked Oswald to stand, and as he did, Oswald hit the officer, raised a revolver and pulled the trigger. Officer McDonald said he grabbed the gun so the hammer of the pistol came down on the webbing between his thumb and index finger and did not fire. McDonald said he then struck back at Oswald and disarmed him.

“Things are up-close and personal for Nick,” Rookstool said. “He let me experience sticking my hand between the hammer and the back of the pistol, and it hurt, believe me.”

For his actions, McDonald received the Dallas Police Medal of Valor and was honored by the National Police Hall of Fame.

Rookstool, who met McDonald after the former officer had moved to Hot Springs, said that after turning Oswald over to jailers, McDonald was told to look for a Lee Oswald, who was not present when employees answered a roll call of the Texas Book Depository, where the shots that killed Kennedy had been fired.

“Nick told them, ‘Captain, I know where Oswald is. I just put him in lockup,’” Rookstool said. “Nick and his captain decided this was the same Lee Oswald, and the prisoner was later charged with the murder of the president, along with killing Officer Tippit.”

Later in McDonald’s career with the Dallas Police Department, he was named supervisor of the department’s communications operation. A widower, he married a dispatcher with the department, Rose Daisy Brown, and they moved to Hot Springs after he retired as a sergeant following 25 years on the force.

Daisy McDonald, who walked with Rookstool to the covered marker on Friday afternoon, said she encouraged her husband to write about his experiences concerning the Kennedy assassination.

“I said he should write it,” she said. “And I said he could not make it sound like a police report.”

The result was a manuscript, Oswald and I, first copyrighted in 1993. Over the years, McDonald expanded the text with commentary, photographs and declassified documents. He completed the work before his death from complications of diabetes on Jan. 27, 2005.

When Rookstool and Daisy arrived at the walk, they found a covered marker at the corner of Spring Street and Post Office Court near the Hot Springs Visitor Center. Bo Ireland, a member of the Hot Springs Street Department who on Wednesday had installed the plaque that weighed over 100 pounds, confirmed that Nick McDonald’s plaque was placed next to a plaque honoring Maya Angelou.

Daisy said it took several years and several nominations to have her husband included in the walk’s honorees.

“I know some people voted against it every time,” she said. “I don’t know why.”

Rookstool said he provided information about McDonald to the Walk of Fame’s committee and wrote a forward to Oswald and I. Rookstool also aided in the book’s publication in 2013 during the 50th anniversary of the assassination. The city of Hot Springs proclaimed Nov. 22, 2013, as Nick McDonald Day.

“I wrote Nick a letter and told him he was a great role model for law enforcement officers, having arrested the most famous criminal in our time,” Rookstool said. “He wrote me back and invited me to meet him in Hot Springs.”

The historian and former G-man would visit McDonald several times over the years before 2005. Once Rookstool brought with him an artifact of the police officer’s fame.

“When the Texas Theater closed, they gave me a row of three theater seats, including seat No. 2, the one Oswald was sitting in when Nick approached him,” Rookstool said. “I got Nick to autograph them for me. I still have them.”

Rookstool had always been interested in the assassination. He remembers being at Love Field, the only major airport in Dallas at the time, to pick up his father on the day the president was killed. Flights were held up while Kennedy’s body was taken to Air Force One and Vice President Lyndon Johnson was sworn in as president.

“I remember my mother told me to take a seat and be still,” Rookstool said. “I hardly moved as Secret Service and White House people moved throughout the airport.”

Working as an analyst for the FBI, Rookstool was assigned to the Dallas office when, during the 1980s, the bureau’s files on the Kennedy slaying were returned to Dallas.

“They came back to the office of origin, and you know how it is when you show too much interest in something at work,” he said. “I was assigned to go through the records and organize them. I spent 9 1/2 years reading all the records.”

When the federal government decided to release the files, he and other officers worked on a JFK-files task force, deciding which records could be released and what would remain confidential.

“Less than 3 percent of the records remain closed,” Rookstool said. “They are files that include sources, methods and procedures, and some dealing with the CIA.”

After leaving the FBI in 1995, Rookstool earned a degree in history and worked for television stations and networks on documentaries about the JFK assassination. The programs Rookstool worked on earned a George Foster Peabody Broadcasting Excellence Award and several Emmy Awards from the Academy of Television Arts and Sciences and were nominated for an Academy Award Oscar by the Academy of Motion Picture Arts and Sciences.

The commission, led by Chief Justice Earl Warren, that investigated the Kennedy assassination concluded that Oswald had acted alone, a finding also agreed on by Rookstool and McDonald.

“I believe without reservation that Oswald killed the president and was the sole assassin,” Rookstool said. “Everything Oswald did seemed like someone who was just making it up as he went along. And after he was arrested, nothing he ever told investigators was the truth. If he had been trying to prove his innocence, something he would have said would have been the truth, but everything he said was a lie.”

“He was not into conspiracies at all,” she said.

“There are two heroes in the story,” Rookstool said: “Johnny Brewer, the shoe store manager who saw Oswald ducking into the Texas Theater, and Nick McDonald, who faced Oswald’s attempt to kill him at point-blank range and took him into custody.”