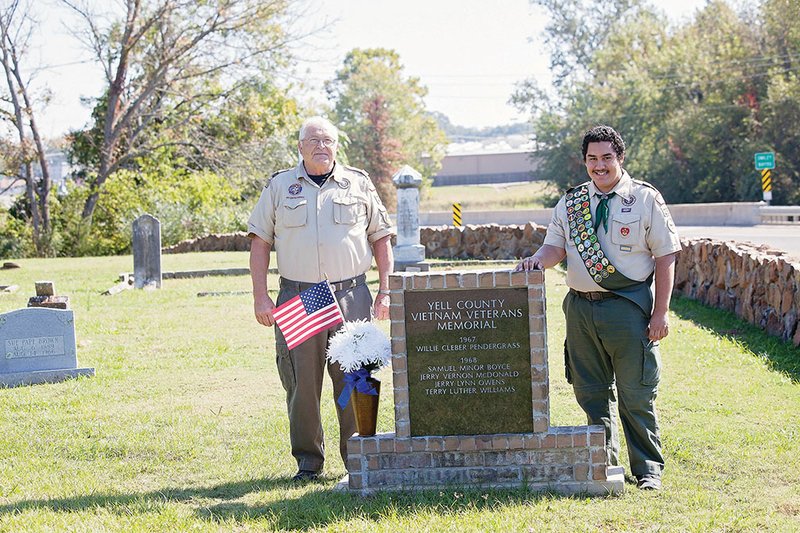 Aaron Hetland, 16, right, and Lyle Hawkins, his grandfather and scoutmaster of Troop 221, stand by the Yell County Vietnam Veterans Memorial. The memorial was Hetland’s idea for his Eagle Scout project. His work was approved at his board review this month, and he will be presented his Eagle Scout badge at an upcoming Court of Honor.

Judy Owens was in class at Danville Junior High School in 1968 when she found out that her brother had been killed in Vietnam.

“I was 14 when he got killed. … I can remember to this day, I was at school, and a lady that my mother worked with — my mother worked at a chicken-processing plant — she told me I needed to come home, something happened to my brother,” said Owens, who is now 60 and lives in the Yell County community of Mount George. “When we went to get in her car, it wasn’t her car; it was the Marines’ [car]. As soon as I saw that, I knew he was dead.”

Owens’ brother, Jerry Lynn Owens, was 20 when he was killed. His name, along with the names of four others who were killed in the war, are engraved in the Yell County Vietnam Veterans Memorial, a project of Eagle Scout Aaron Hetland, 16, of Dardanelle.

Hetland said that two years before, his Eagle Scout project — Troop 221, led by his grandfather Lyle Hawkins — took a trip to Washington, D.C., and visited the national Vietnam Veterans Memorial. The Scouts made etchings of the names of fallen soldiers in Yell and Pope counties.

“We made plaques for the families, and we’ve located more than half of them,” he said. “They were kind of surprised that someone besides them still cared.”

Hetland said that about eight months ago, his grandfather suggested that it was time for him to advance from Life Scout and asked what his Eagle Scout project was going to be.

“I said right away that I wanted it to be a memorial for the boys from Yell County from Vietnam that died in action. I didn’t really have to think about it,” Hetland said. “It’s bigger than a lot of projects for Eagle.”

Hetland is the son of Kay Hetland of Dardanelle and the late Jeff Hetland. Hetland said his father died at age 45 of an abdominal hemorrhage. Hetland was 7, but he said he remembers that his dad liked history and had books on Vietnam.

The teenager held a garage sale and solicited donations to pay for the granite memorial, which was erected in the Brearley Cemetery on Arkansas 27 in Dardanelle. The cemetery is on the National Register of Historic Places.

The memorial is dedicated to the following veterans:

Judy Owens said her mother was a strong woman, a widow who raised six children by herself; a seventh child died. Jerry and another of her brothers were Marines, Owens said.

“What’s funny, Jerry, when he was growing up, he was, I guess you’d call it a problem child in the family,” Owens said, laughing. “When he got into the Marines, you talk about an about-face. When he’d come home on leave, he’d make me learn every single march they did and every single song they sang. That gave him, I guess, a purpose in life.”

She said Jerry had been shot in the leg and had been on a hospital ship in Guam for a few months before he was killed.

“Mom didn’t cry much; she was a widow with all those kids. I said, ‘What’s wrong with Jerry?’ and she didn’t say anything. I said, ‘What’s wrong with Jerry?’ I thought it was just his leg. They sent him back to battle. Come to find out, he asked to go back. Before we even had the funeral, we got a letter from him, and he told us he’d asked to go back to battle because he felt it was his duty to go back and help his buddies, and that he had put himself in God’s hands.”

Owens said she doesn’t know what happened to the letters that her brother wrote.

She said her mother dreamed shortly before Jerry was killed that he was on a hill and had been shot, and he was calling out to her. Owens said her mother wrote to his commanding officer, who told her that Jerry actually had been on a hill when he was shot, and that he lived for three or four hours afterward.

Owens, whose mother is no longer living, attended the memorial dedication over the summer with members of three other soldiers’ families. The family of Willie Pendergrass is the only one that hasn’t been located, Hawkins said.

Hetland said the relatives of the soldiers killed in action are appreciative of the memorial.

“They were really enthused that someone actually still cares about their family members, whether it be an uncle, a son, a brother, a father,” Hetland said.

“Oh, it’s wonderful, wonderful,” Owens said. “You can’t repay anybody. I gave him (Hawkins) money for the Boy Scouts to have a pizza party. You can’t repay somebody for doing something like that for your family member, for honoring them in that way.”

Owens said she has seen the traveling replica of the Vietnam Veterans Memorial, but she hasn’t been to Washington, D.C., to see the national memorial. To have one so close to home is special, she said.

“It means everything, because Jerry was so proud of being a Marine and so proud of what he was doing, and to think that this many years later that they are trying to do something means a lot,” she said. “It brings back all the memories, good, bad. And that’s good, you know?”